And the reality TV troop proved just that when they arrived to Nobu restaurant in Malibu on Thursday evening while putting on typically glam displays.

Kim Kardashian was joined by sisters Kylie and Khloe along with mom Kris who walked hand-in-hand with her longtime boyfriend, Corey Gamble.

The gang’s all here: Kim Kardashain, Kylie Jenner, Khloe Kardashian, and the rest of the Kardashian clan headed out on Thursday evening to enjoy dinner at celeb hotspot Nobu in Malibu

The gang rode together in style, as they shared footage on their Instagram stories of themselves grooving to blaring rap music and posing for hoards of selfies.

Kourtney, took a calmer approach, and arrived separately with her 7-year-old daughter, Penelope, and her baby daddy ex Scott Disick.

Brother Rob Kardashian and their model sister, Kendall, were missing from the action as their whole family lived it up in style. 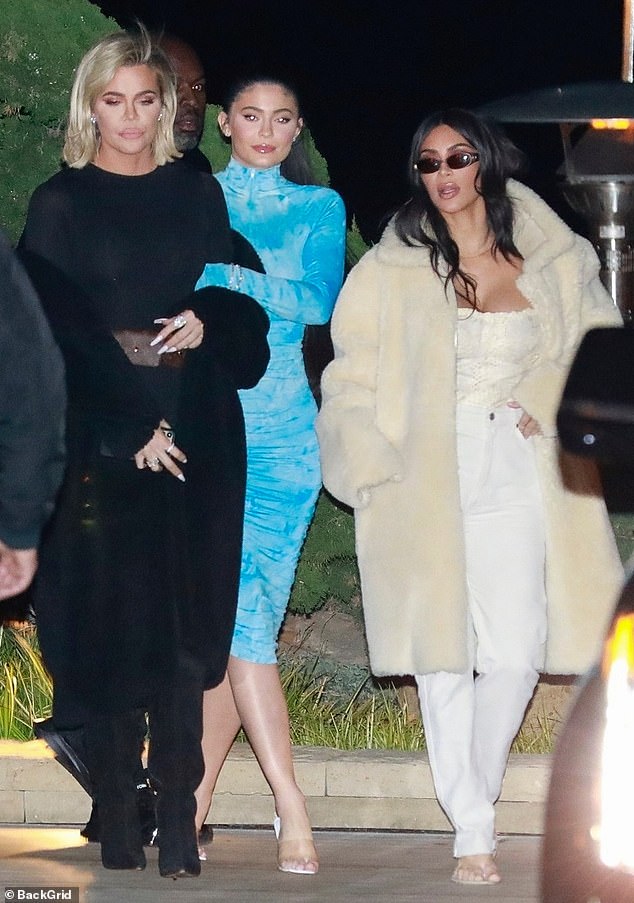 Kim: Kim kept it monochrome in cream, as she donned an oversize fur coat , crochet top, and white high-waist jeans 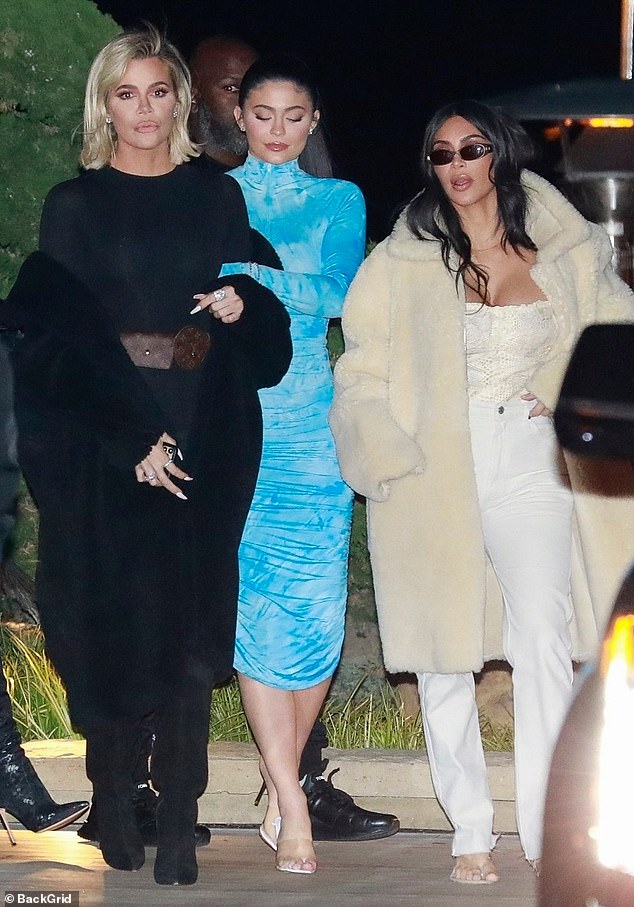 Kylie and Khloe: Kylie Jenner showed off her signature hourglass figure in a tight-fitting, aqua body-con dress, while Khloe kept it simple in an all black ensemble 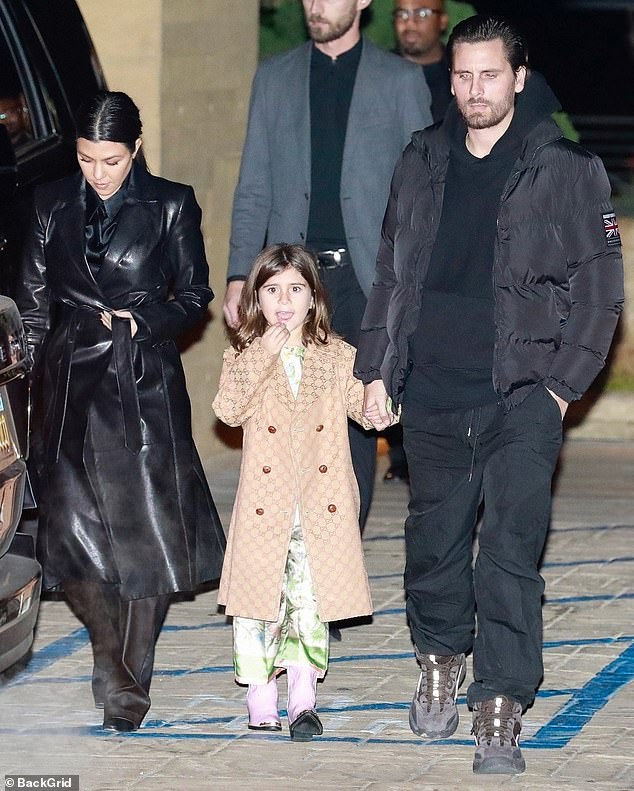 Don’t forget us! Kourtney joined in on the night alongside her 7-year-old daughter and her baby daddy Scott Disick

The Kardashian-Jenner ladies showed off their individual fashion sense as they stepped out for the evening.

Kim rocked a monochrome ensemble that featured a sherpa coat, crochet tube top, and a pair of white high-waist denim.

Her signature brunette locks were parted dramatically in the middle and styled into a slew of textured beach waves. 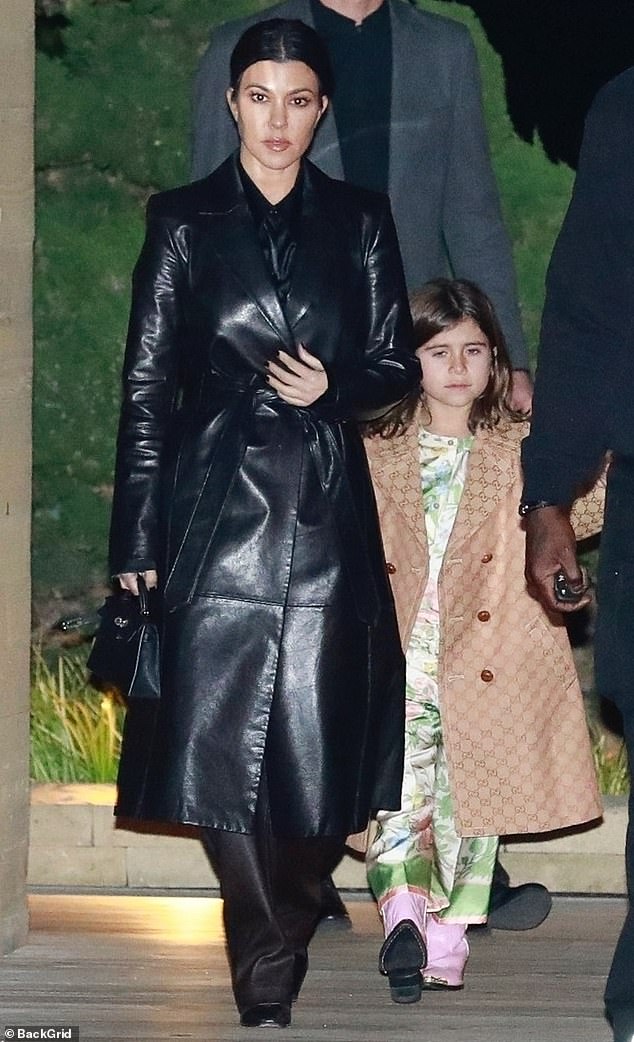 Kourtney next: Kourtney appeared to be channeling her inner Matrix character as she stepped out in a black leather trench coat 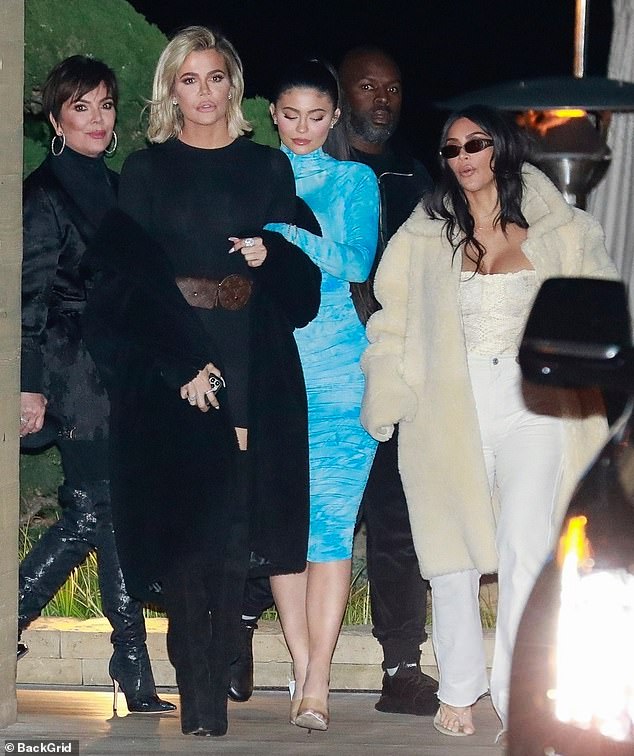 Kris and Corey: Kris Jenner was in on the fun with her long-time boyfriend Corey Gamble

Kylie donned a tight-fitting, curve-hugging dress that left little to the imagination.

The eye-catching dress featured an aqua colored tie-dye pattern that covered the entirety of the mock-necked silhouette.

She kept the dress the focal point of her dinner look by pulling her hair back into a tight ponytail and rocking a simple pair of clear heels. 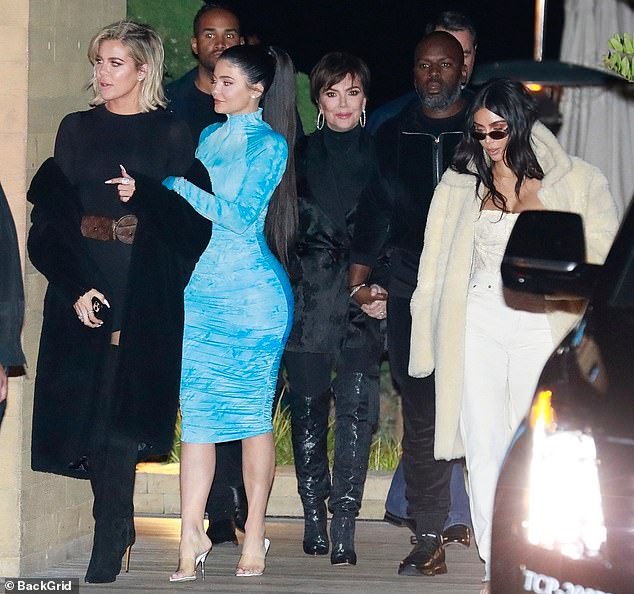 Support: Kylie held on tightly to her sister Khloe, while Corey kept Kris’ hand wrapped tightly in his 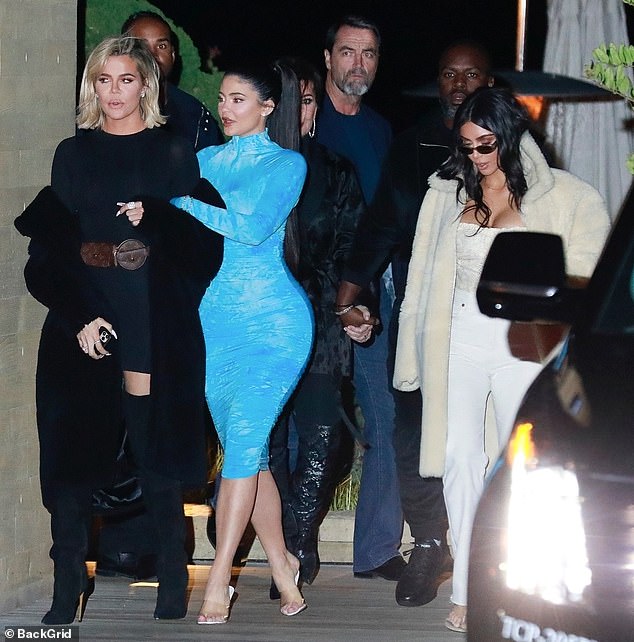 Curvaceous sisters: Each sister showed off their killer curves in their diverse outfit options 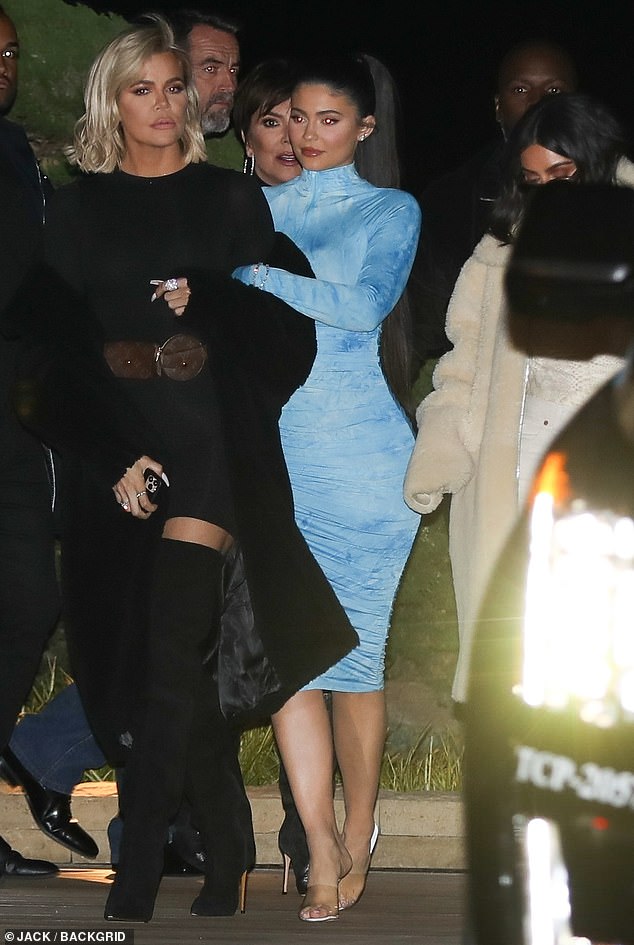 Long pony: Kylie’s pony cascaded down her back

Khloe kept it simple in an all black ensemble that cinched at the waist with the help of a Louis Vuitton belt. The only blonde Kardashian rocked her hair in a side part and let her hair do its own thing.

With her luxe black fur coats slipping down her arms, she graciously helped sister Kylie make her way to the Nobu front entrance,

Kris, who stood close by Corey, donned a similar outfit to Khloe’s, but opted for pants instead of a dress. 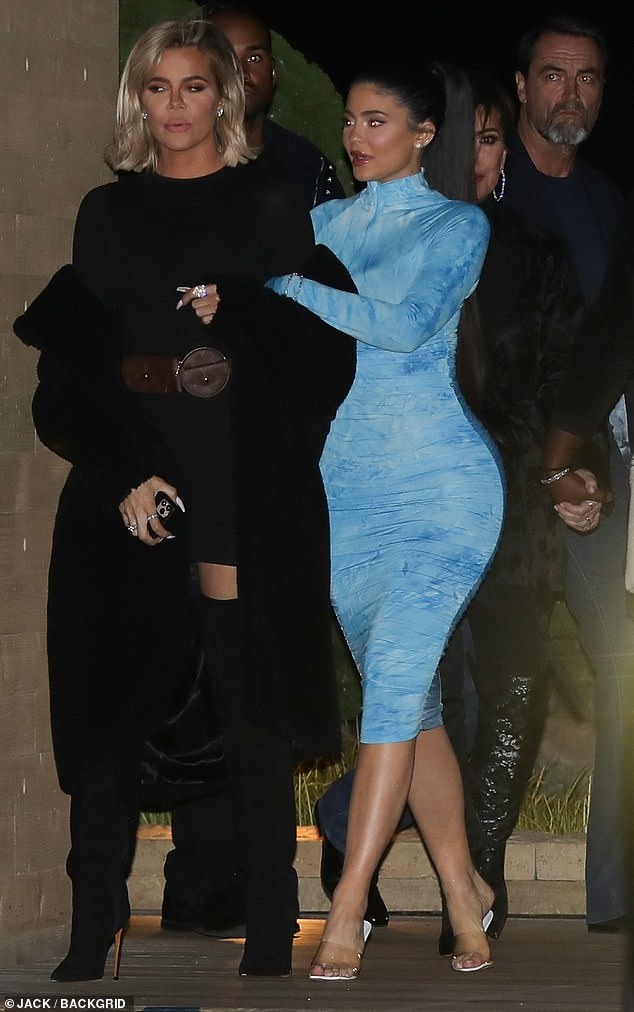 One step at a time: Kylie seemed to wobble as she walked in her loose fitting heels 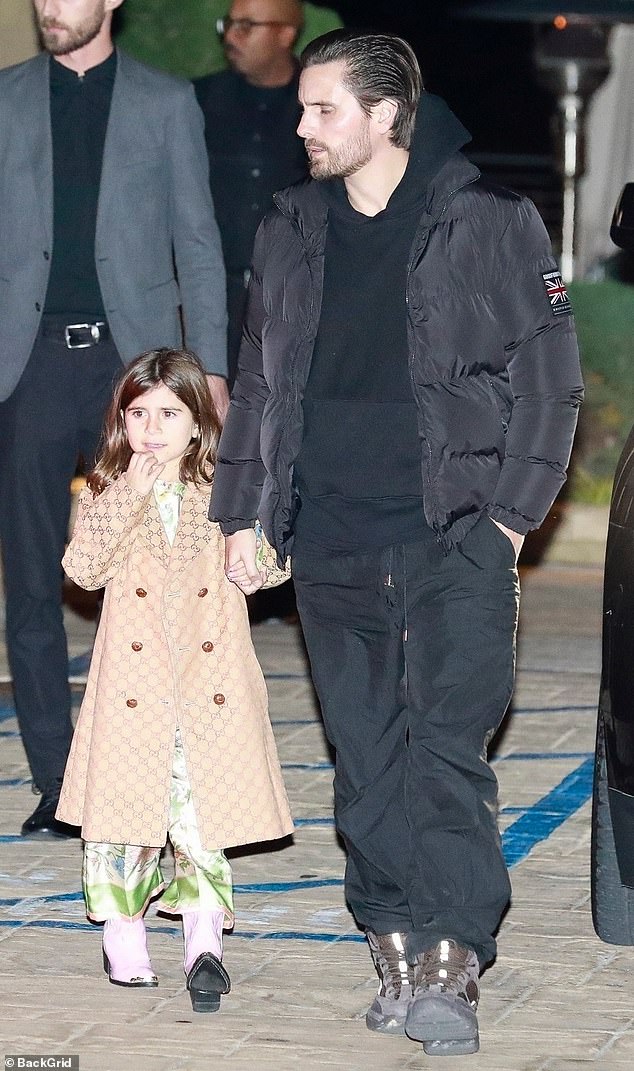 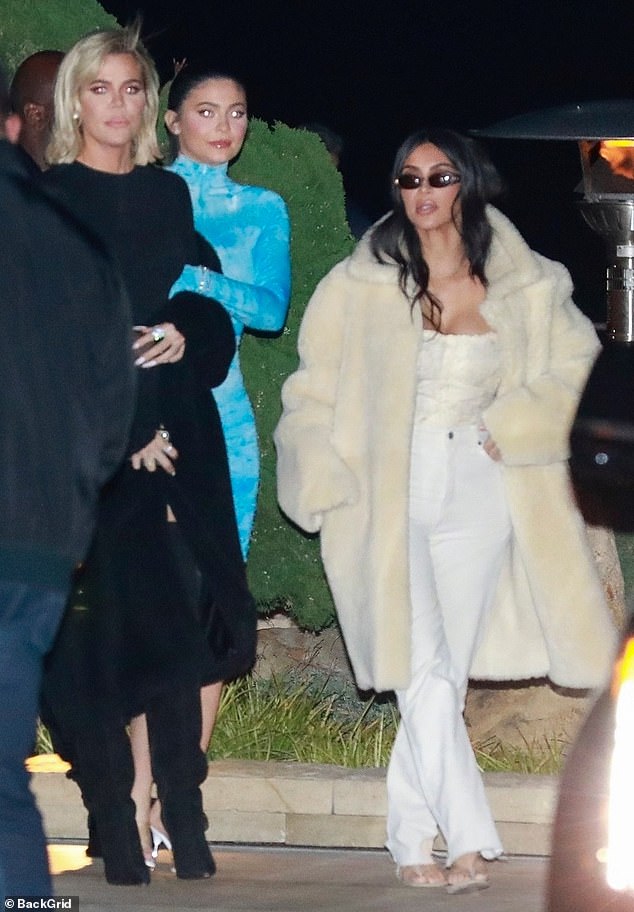 Uh oh: The sisters seemed weary of the paparazzi as they exited their vehicles outside Nobu

She showed off a pair of killer thigh high, black leather boots that contrasted nicely against her fur top.

Sister Kourtney held onto Penelope’s hand as they approached the rest of the family at the restaurant’s entrance.

She channeled Neo from the matrix as she covered up her toned physique in a long, black trench coat. 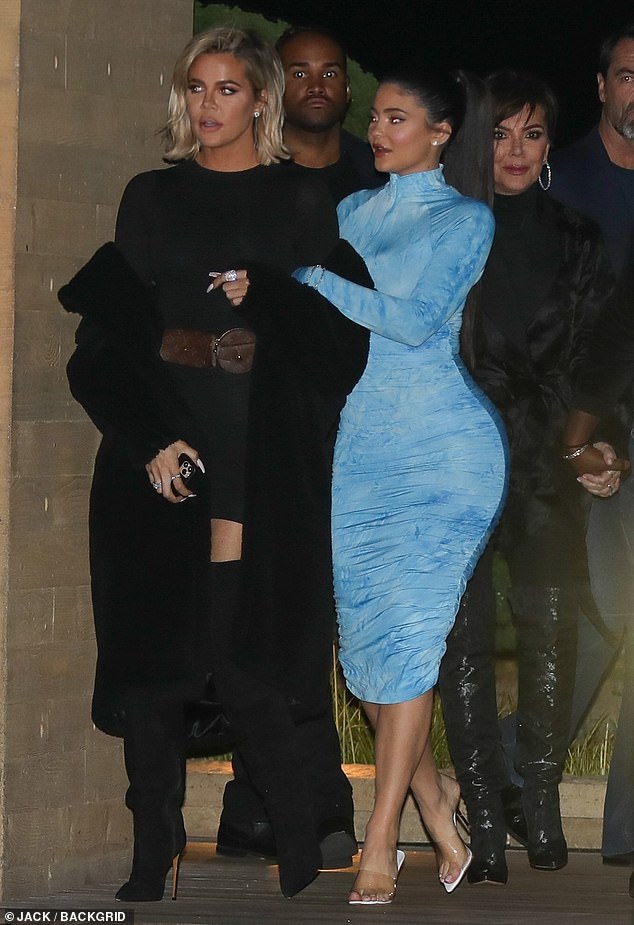 Braving the storm: The Kardashian-Jenner clan wasn’t going to let the shutterbugs stop them from getting to their highly anticipated dinner 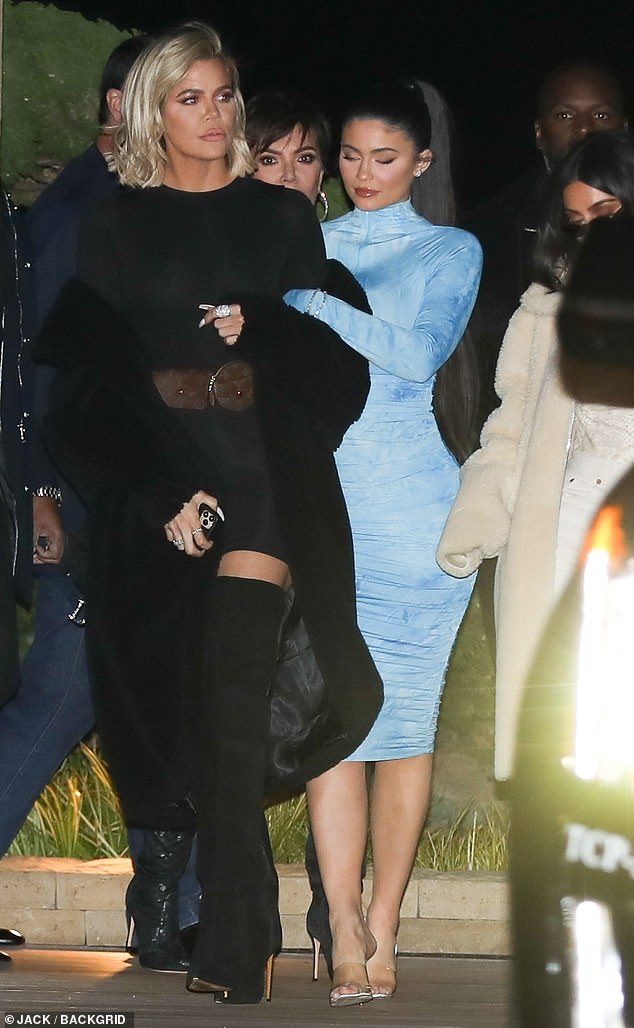 Taking charge: Khloe seemed to be the one in charge of keeping the whole group in check 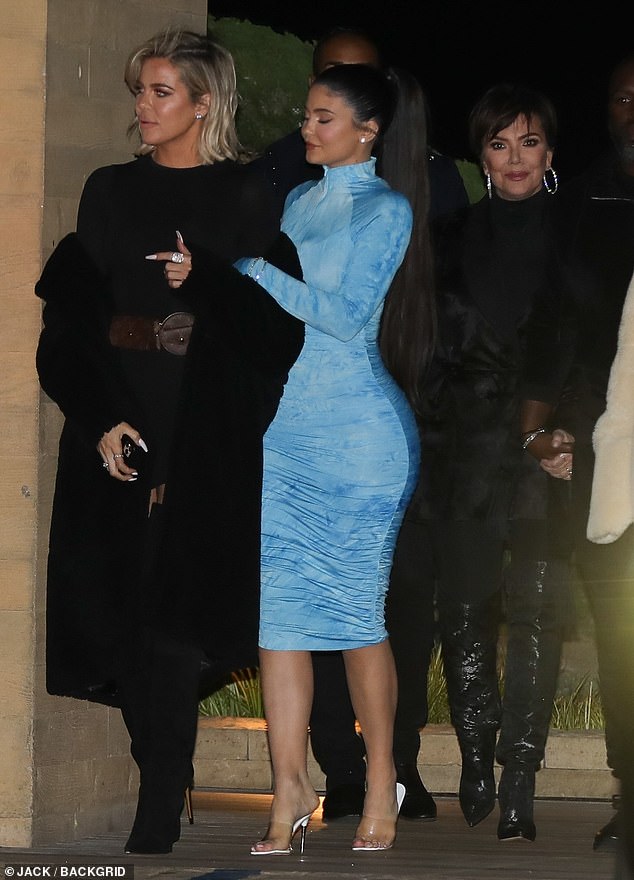 Directions: Khloe lead the way, as her family followed 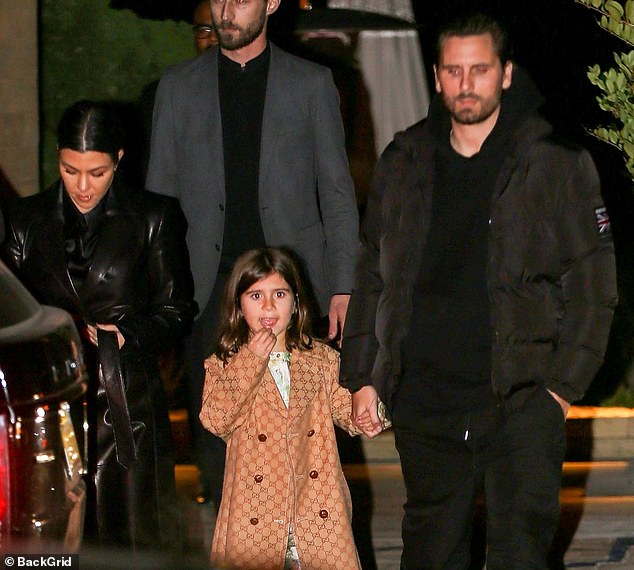 Fending for themselves: Kourtney, Scott, and Penelope seemed to handle the shutterbugs just fine on their own

Penelope channeled her playful side in a children’s Gucci coat which covered up a leaf patterned jumpsuit.

She also made sure to throw on her favorite pair of light pink cowboy boots for the family gathering.

Scott, who stuck by his ex and their offspring, dressed for warmth, not fashion.

He threw on a puffer coat, black hoodie, and black sweatpants for the occasion. 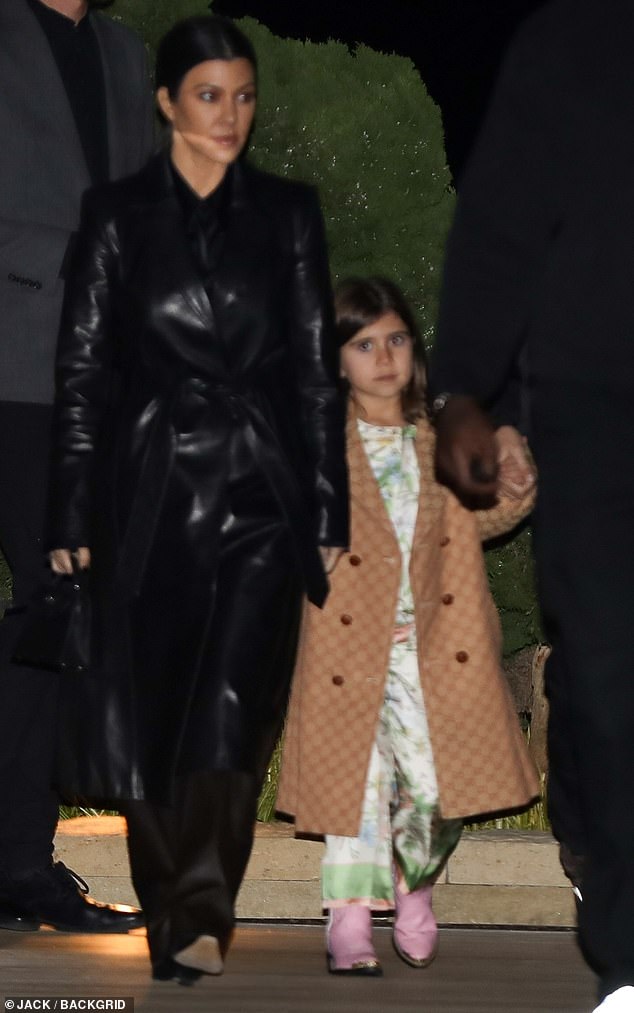 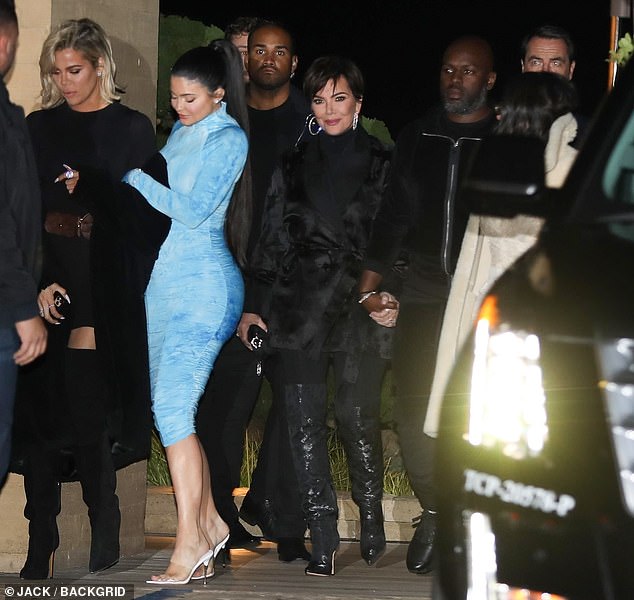 Mom to the front: Kris flashed a killer smirk at the cameras as she made her way around her daughters 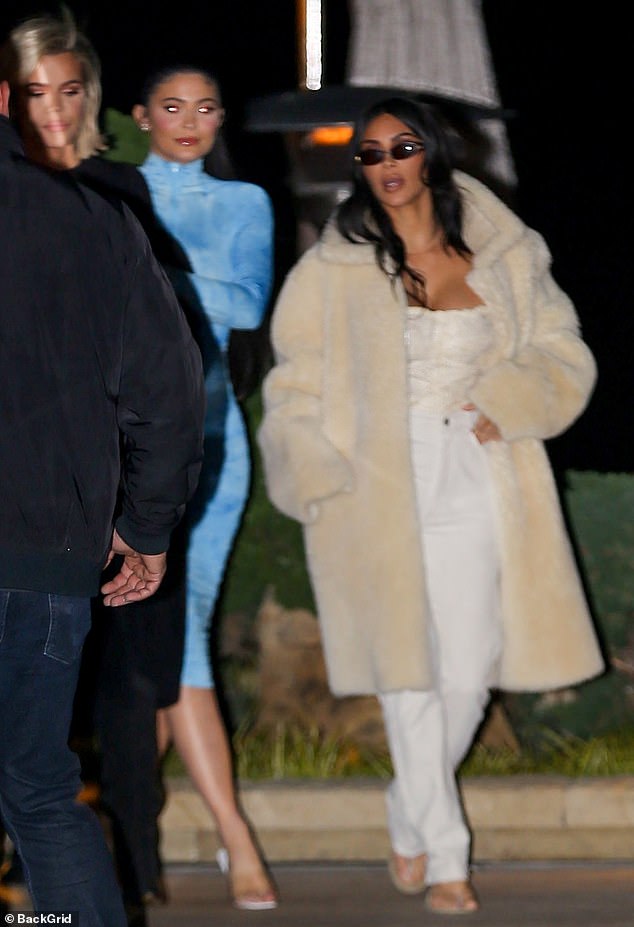 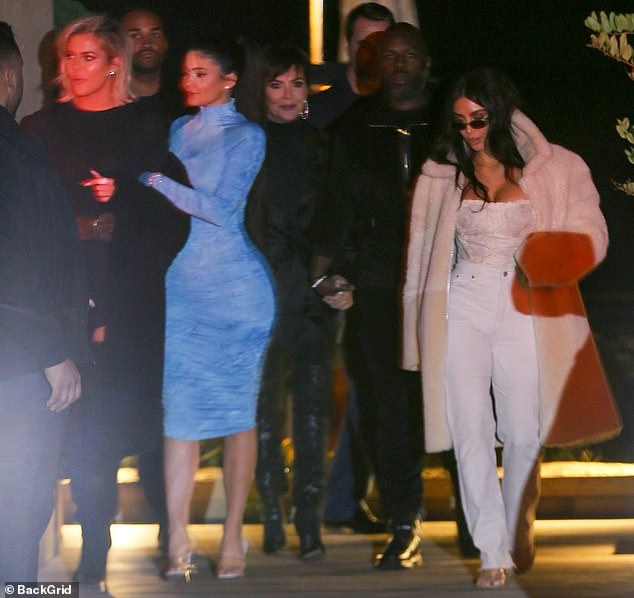 We’ve arrived: Khloe spoke to nearby employees as they made it to the restaurant’s front steps 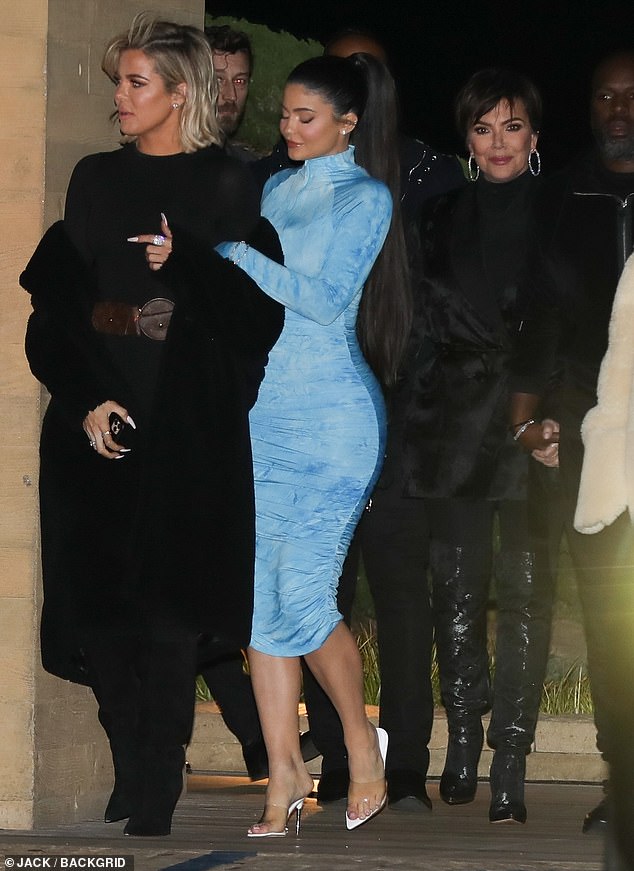 Weather is no issue: Khloe and Kris appeared to dress for the evening chill, but Kylie dressed for style over comfort 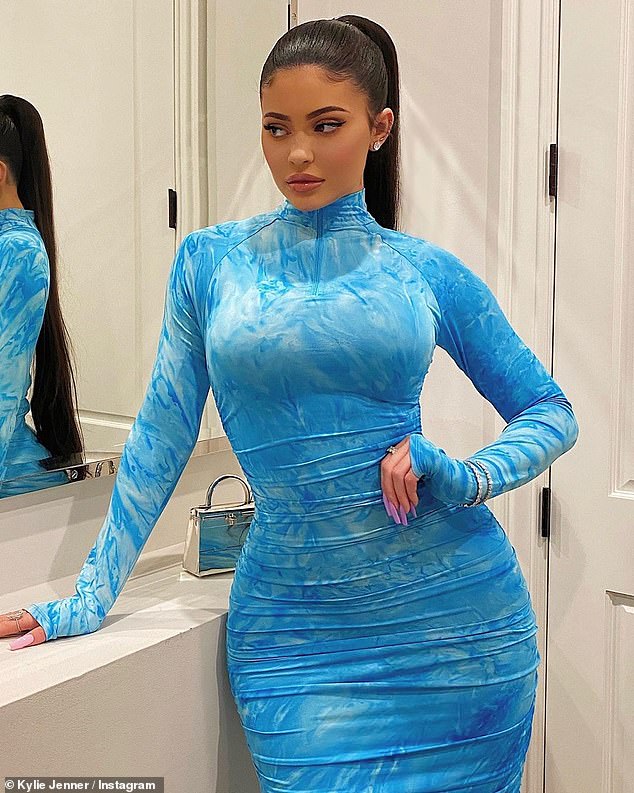 Couldn’t wait: Kylie was eager to share her night’s outfit, so she posted it to her Instagram page 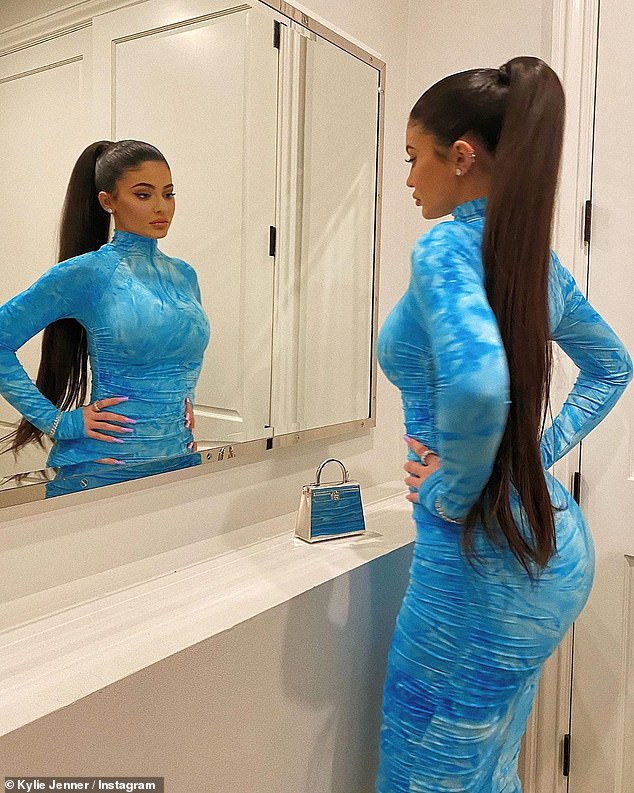 Feelin’ herself: The make-up mogul posed before her bathroom mirror as she rested her matching mini-purse on the counter. 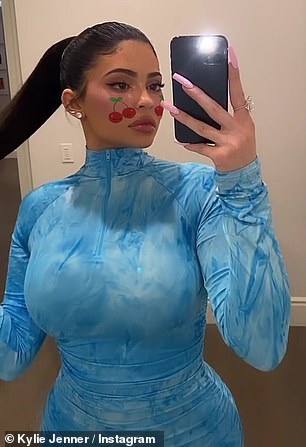 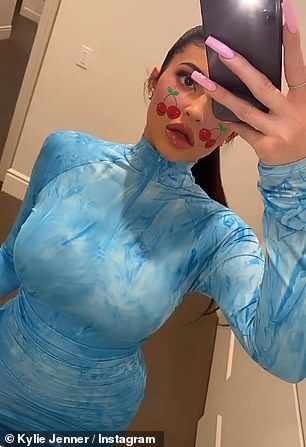 Look pretty: Jenner used the popular ‘cherry’ filter on Instagram to give fans a three-dimensional look at her killer fit