She appeared on the Monday episode of The Tonight Show: At Home Edition with host Jimmy Fallon.

And during her interview, Kim Kardashian revealed the entire 18th season had been filmed, except for the final episode, which was filmed individually by cast members as everyone had gone into quarantine.

The 39-year-old entrepreneur said:  ‘It will be all of us in quarantine, filmed separately by ourselves.’

Real talk: Kim Kardashian revealed the entire 18th season had been filmed, except for the final episode, which was filmed individually by cast members as everyone had gone into quarantine.

‘So we all have tripods set up, and our iPhones, and the last episode will be what we do in quarantine.’

Kim also reflected on an ‘intense brawl’ she had with sister Kourtney which ‘shut down production’ of their KUWTK show for one week.

The reality star discussed the physical fight with Kourtney , which was shown on the last episode of their reality show, on The Tonight Show: At Home Edition and said Kourtney ‘scratched her so hard, she was bleeding.’

Speaking from Kris Jenner’s ‘glam room’, Kim vented about her current circumstances as she remains in quarantine amid the coronavirus pandemic. 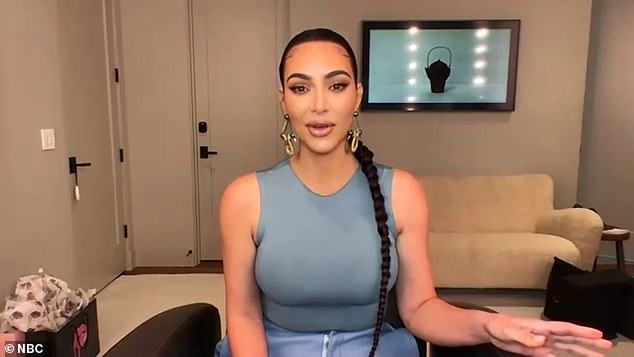 Candid: The 39-year-old said: ‘It will be all of us in quarantine, filmed separately by ourselves’

She said: ‘It was pretty intense. I feel it was a lot of built up resentment from Kourtney or just feeling like she doesn’t want to film anymore.

‘She’s not the type of person to make a decision, and say “Okay guys, I’m not going to film,” but she would come to work with an attitude everyday, and kind of take it out on everyone and the crew and to us and wouldn’t really make that decision, so we would kind of like keep on pushing her, to figure out why she was so unhappy.’ 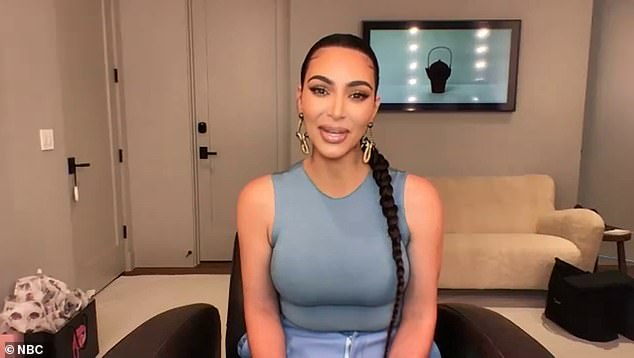 ‘I was bleeding’: Kim Kardashian talked to The Tonight Show: At Home Edition about her ‘intense’ brawl with Kourtney and revealed they ‘shut down production for a week’ after fight 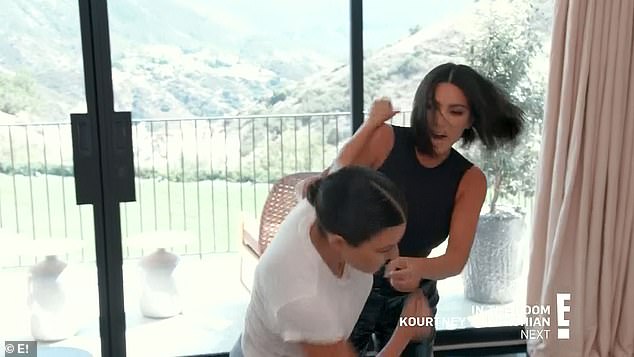 Not cool: Kim said that while the fight is ‘not her proudest moment’ Kourtney ‘scratched her so hard she was bleeding’ – and the incident left their mother Kris in tears

‘When my mom saw that, a clip of that, she cried. And was like, “Who are you guys? Like what is going on?” Kourtney and I are obviously fine now, but we shut down production for a week after that.

‘I think everybody was really shook for a minute, and just was like “this isn’t our type of show, what’s happening? We want everyone to be comfortable and safe.”

‘But you know, that happened, and I don’t really ever resort to violence like that, but she scratched me so hard, which you guys didn’t see, I was bleeding. You didn’t really get to see that detail, but when I looked down at my arm and saw she had really scratched me and I felt it all on my back, I just went over and slapped her back. 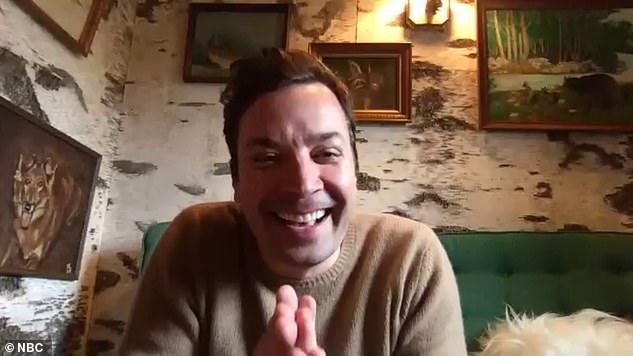 ‘It’s not my proudest moment, but we were going through it, and she’s made the decision to take time off now, and I think she really needs it and I think that will be so much better for her.’

Kim had got her makeup done by sister Kylie Jenner, 22, for her Tonight Show appearance, said:

‘I snuck out and I’m at my mom’s house in her glam room, because there’s a door from the outside, so this is all she’ll let us in. And I had to get away from my kids.’

‘We’ve done everything from edible slime… it’s spring break now, but we have school usually so to be the teacher to four young kids, well two are in school, so the two is like insanity.’

‘And then they have to stop for PE,’ she later added. ‘And go run up and down in the backyard, or they do these like yoga, Pokemon yoga or the princess… it’s insane.’

Kim also revealed her husband Kanye West had begun watching foreign films after going through an array of movies.

‘Kanye has now fully… he’s watched everything, that he’s like now into foreign films. So he watches everything with every subtitle… He’ll stay up all night watching movies.’ 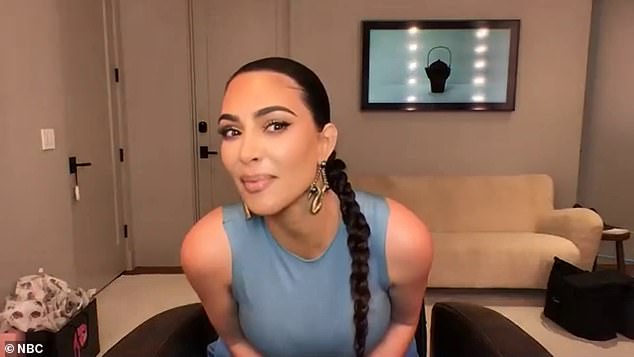 How do I look? Kim said her sister Kylie Jenner had done her makeup done for her TV appearance 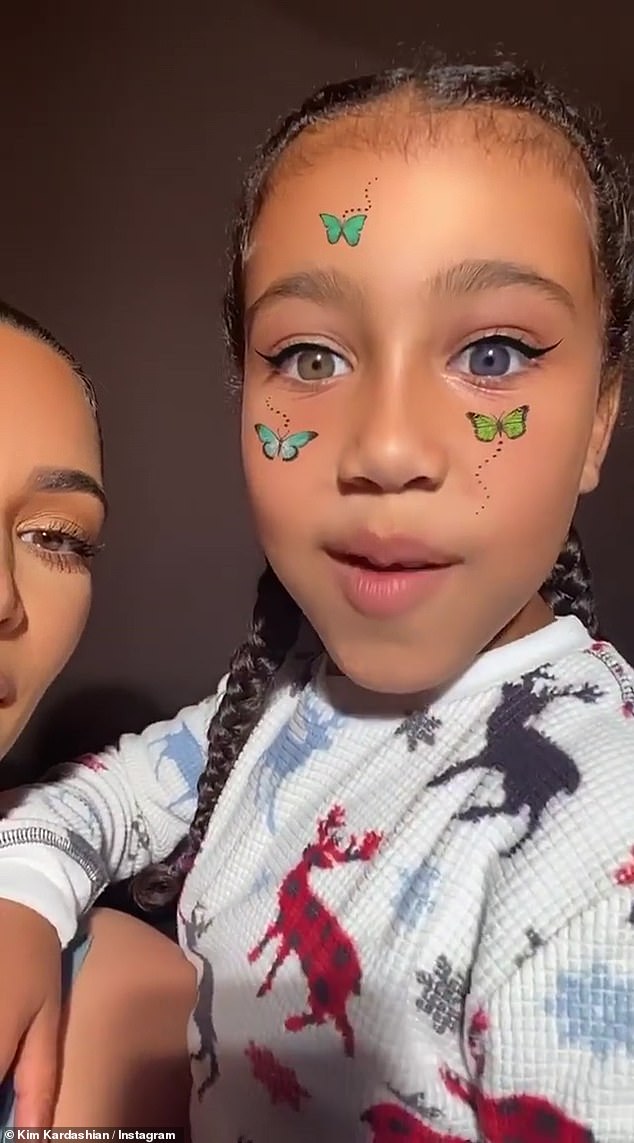 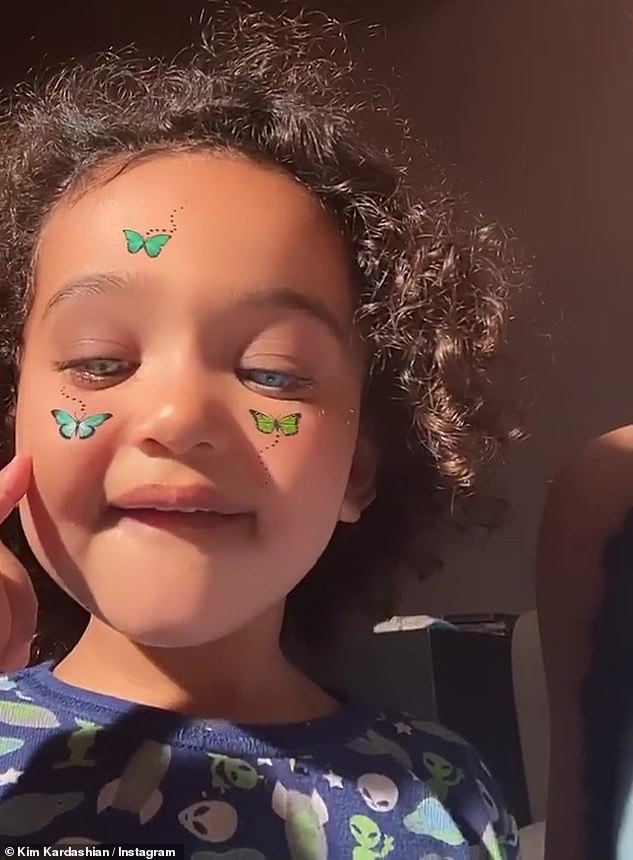 Aww: Chicago sported green and blue eyes and a scattering of butterflies