The mother-of-four modeled the pieces while in her massive Hidden Hills, California mansion.

And behind the Vogue cover girl were the Dr Seuss inspired Christmas decorations which have garnered much ridicule online for resembling both marshmallows and tampons. 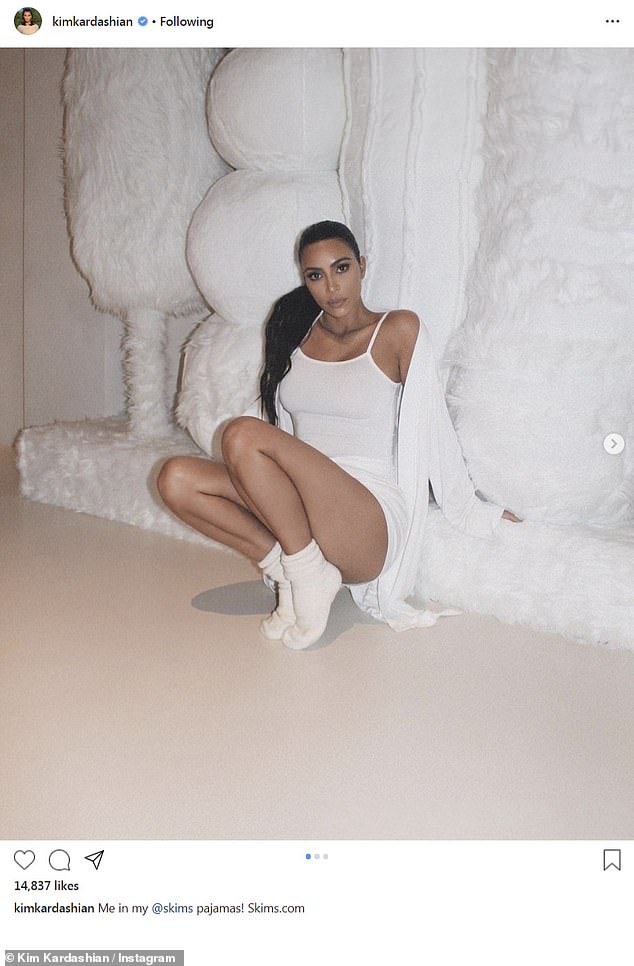 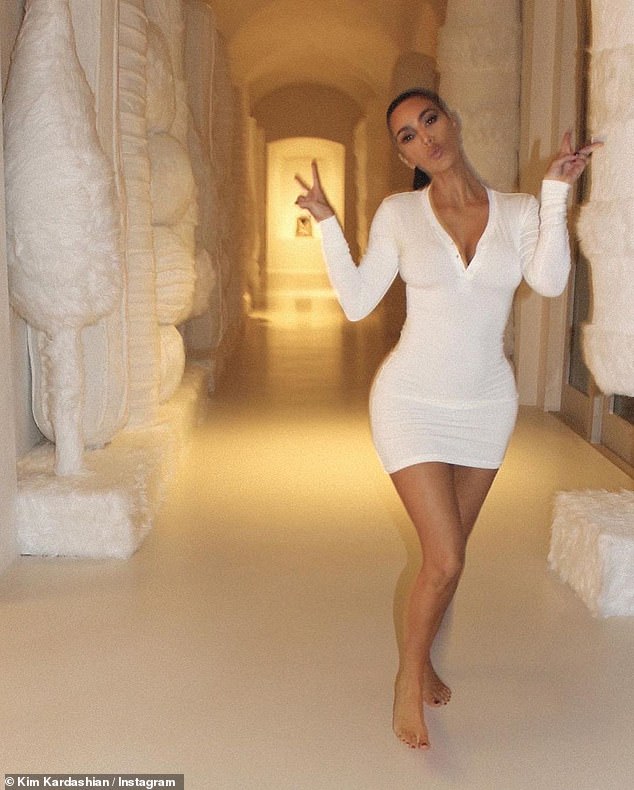 Home sweet home: The mother-of-four modeled the pieces while in her massive Hidden Hills, California mansion

The items looked very comfortable as they hugged her Playboy cover star curves.

The siren was in a tank top with shorts, a low cut long-sleeved shirt and a short sleeved top. She also added a robe at one point.

Behind her were the fluffy white decorations that some have found ridiculous.

‘Am I the only one who thinks Kim Kardashian’s Christmas decor looks like a bunch of tampons like wtf kinda s**t is that that ain’t Christmas decor,’ wrote one keen-eyed observer on Twitter.

Another baffled fan wrote ‘I am actually so confused at Kim Kardashian’s Christmas trees or decorations or whatever the f**k they are’. 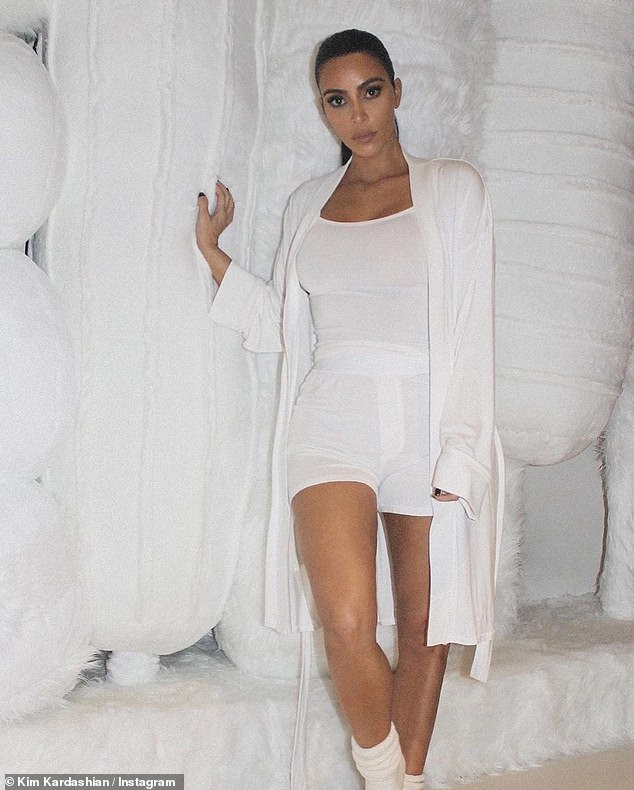 Different but not bad: Behind her were the fluffy white decorations that some have found ridiculous

‘JUST STICK A TREE WITH LIGHTS AND TINSEL UP AND BE DONE WITH IT.’

However the mother-of-four didn’t seem to agree, saying of her decorations: ‘I love these. They’re so whimsical, like Whoville, but all white.’

Kim does deserve points for trying something different and not always going with the status quo.

Her and Kanye West’s minimalism approach features their gigantic hallway lined with white fluffy trees that she explained reminds her of Whoville from How the Grinch Stole Christmas.

The reality TV star went on to say that the decorations that now reside in her home were actually used as decorations for the family’s annual Christmas Eve party last year. 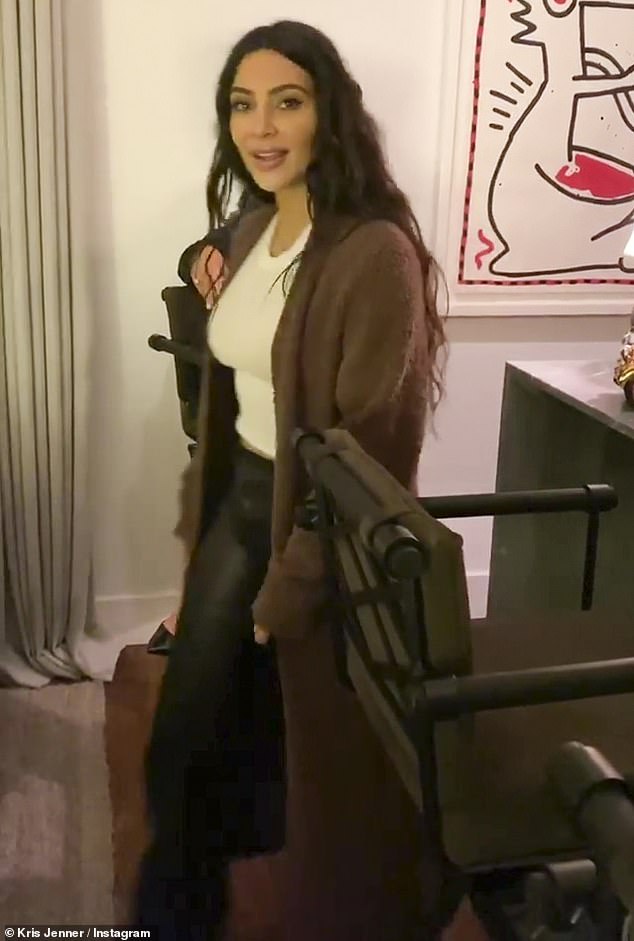 On the go: Here she is seen at her mother Kris Jenner’s home on Wednesday

Kim’s holiday decor preview comes after the couple had a strict rule that they wouldn’t show off their Hidden Hills mansion off on social media.

‘I’m so excited for another amazing @skims launch… the Sleep Collection!!’ began the wife of Kanye West. 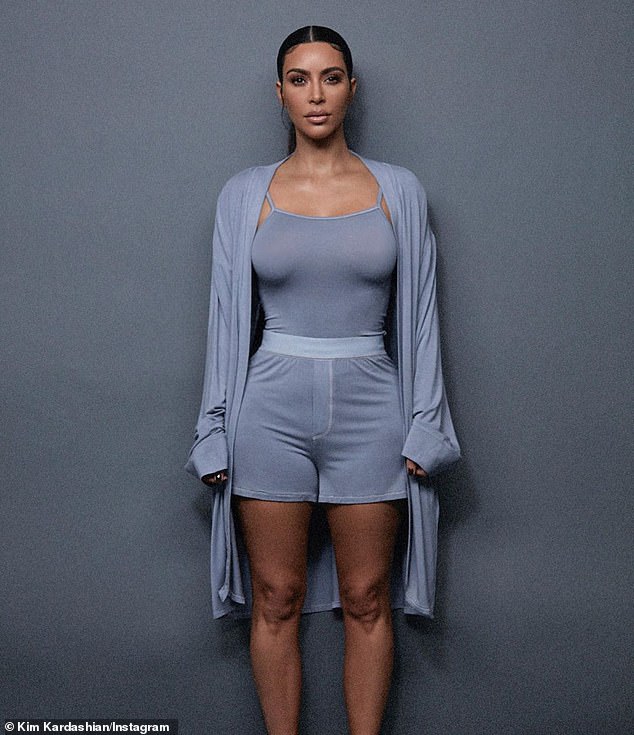 More to buy! Kardashian has been rolling out new lines from SKIMS for months

‘The modal jersey fabric is so stretchy, comfortable & breathable, I’m always sleeping in these now,’ added the mother-of-four.

‘They will come in colors Bone, Slate and Onyx. (I’m wearing slate in these pics) .’

She then urged her 153M Instagram followers to ‘sign up for the waitlist’ to make sure they get them before they sell out. 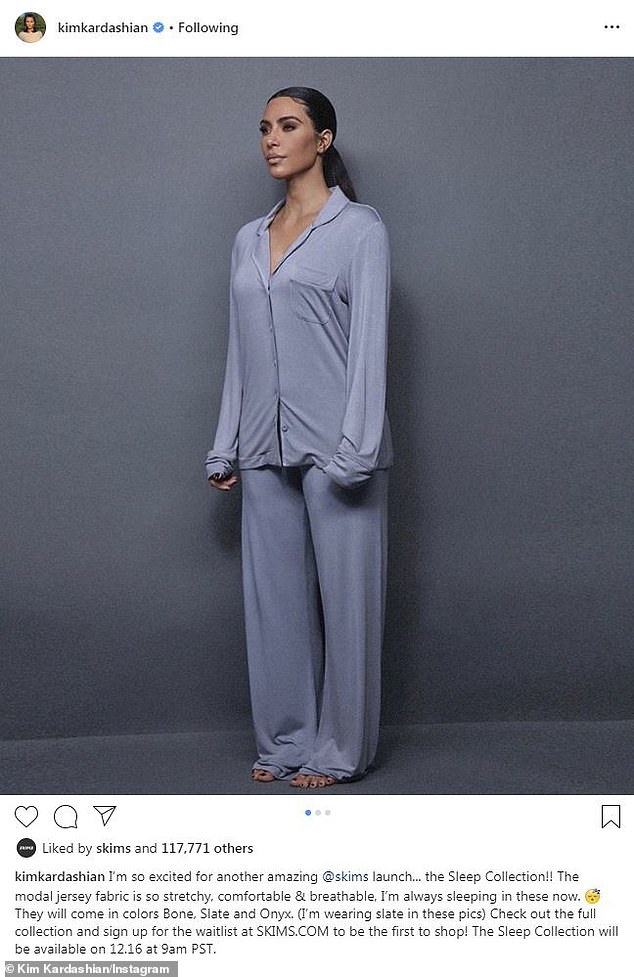 Jammies! ‘I’m so excited for another amazing @skims launch… the Sleep Collection!!’ began the wife of Kanye West 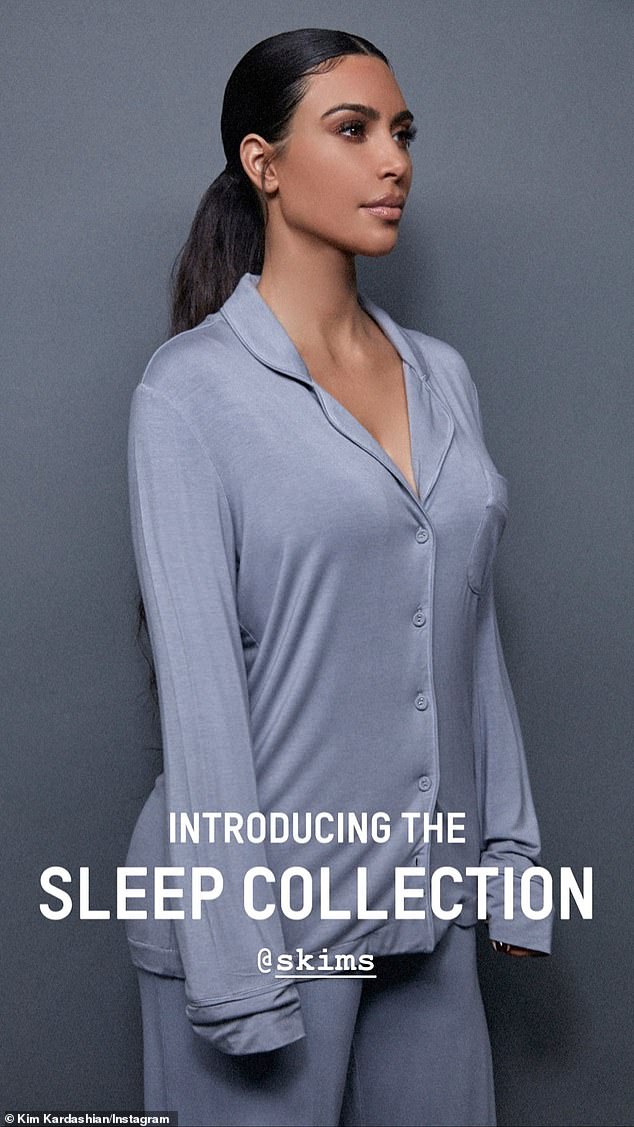 Plugging away: ‘The modal jersey fabric is so stretchy, comfortable & breathable, I’m always sleeping in these now,’ added the mother-of-four. ‘They will come in colors Bone, Slate and Onyx. (I’m wearing slate in these pics) .’ Oddly, the sleeves seemed much too long for her

Her last few lines have sold out in minutes.

The Sleep Collection will be available on December 16 at 9am PST.

In one of the photos Kim has on what looks like a typical pajama set with top and pants.

And in another photo the star has on a tank top, shorts and a robe with her hair pulled back. 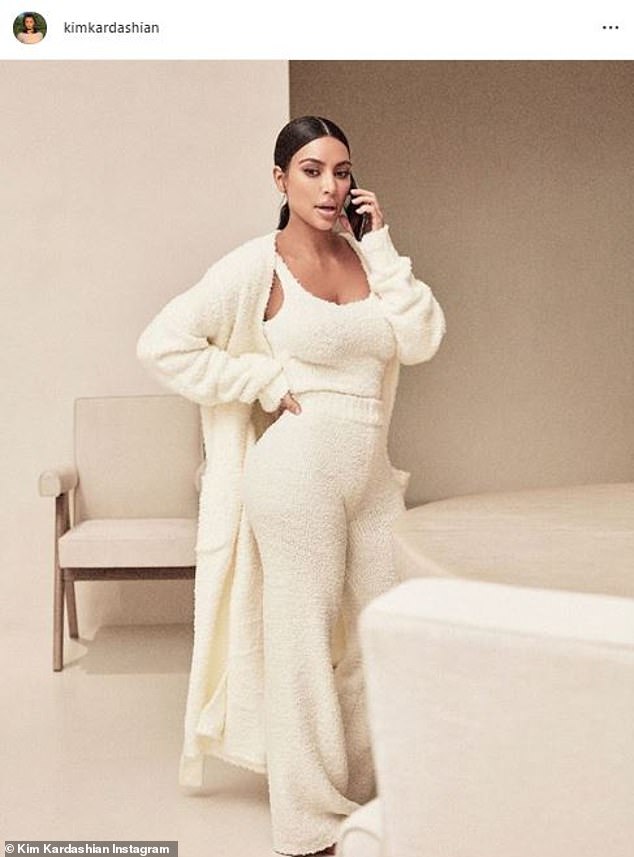 ‘OMG I’ve been dying to share this with you guys… it’s probably my most exciting @skims launch yet!!!’ said the cover girl.

‘The Cozy Collection has pajamas & loungewear pieces that I have been living in at home – I even sleep in this robe sometimes!

‘It comes in 4 amazing colors, you guys are going to die when you feel how soft this fabric is… you will never want to take it off!’ the mother of four added.

‘The @skims Cozy Collection drops on Monday, 12.09 at 9AM PST at SKIMS.COM — perfect timing for the most cozy holiday gift for yourself and loved ones!’ 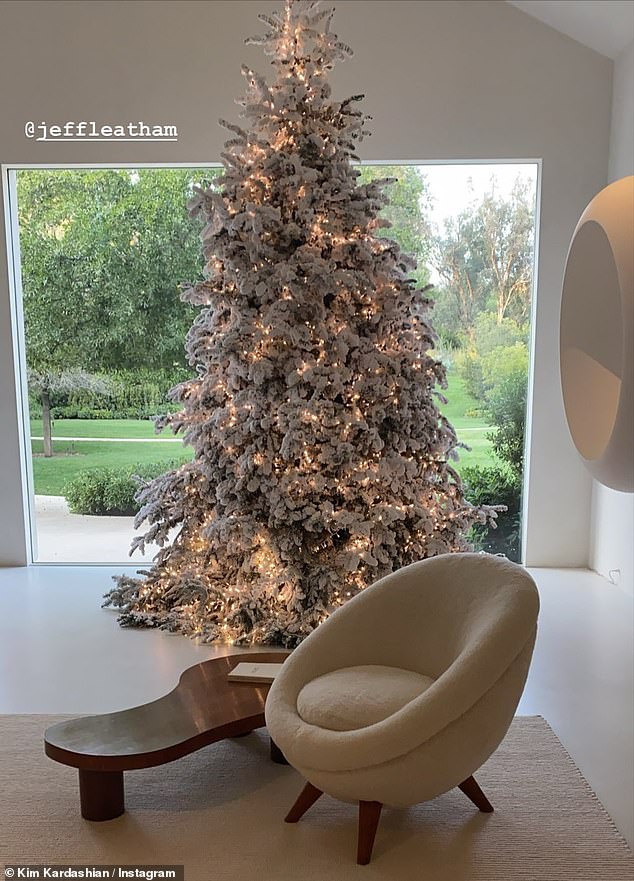 A look at the West mansion: Kim has beautifully decorated the understated Hidden Hills, California home