She likes to change her hair on the daily.

And now Kim Kardashian is rocking an extravagantly long braid, which reaches down past her waist to the top of her thighs.

Posing in her cavernous closet, which has clothes sorted by shade, Kim, sat on the edge of a large grey couch, hands behind her, pouting straight into the camera. 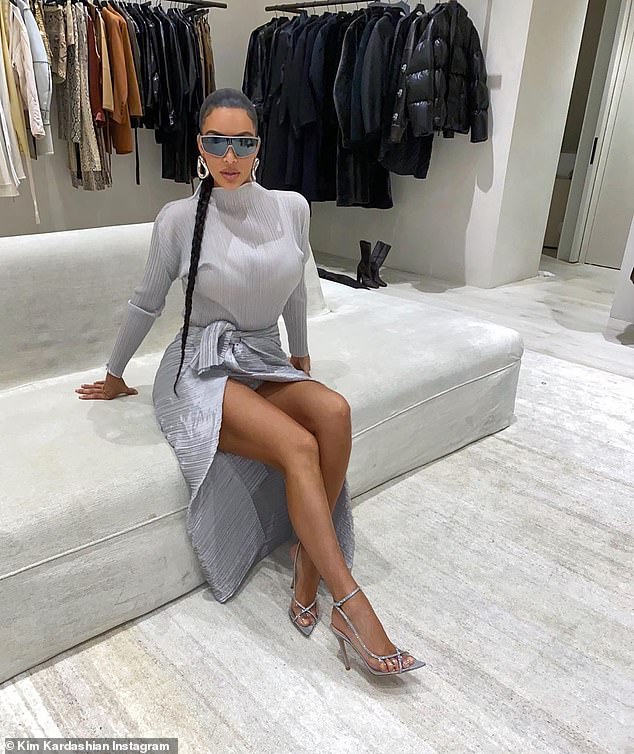 It’s Kim! The Kardashian reality star strikes a pose in her cavernous closet as she shows off her thigh length braid and futuristic look on Thursday

Wearing futuristic shades that hid her eyes, her crossed legs were on show in a metallic high neck silver dress, with open wrap skirt.

While initially Kim, 39, and her husband Kanye West pledged to not share social media images from inside their home, they have slowly been relaxing that rule.

Along with Kim’s frequent closet selfies, they have also opened their doors to Architectural Digest.

And on Wednesday night Kim gave a tour of her four children’s extravagant playroom, featuring  its own stage. 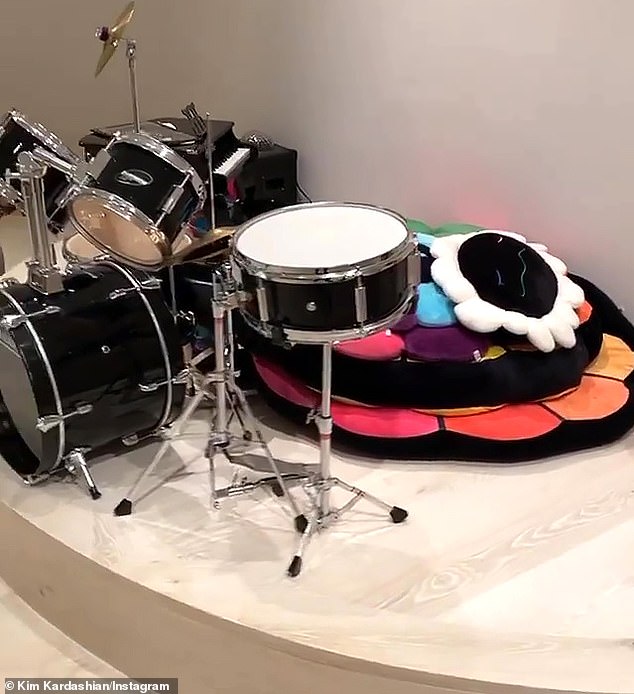 Having a ball: Showing they have inherited their father’s love of music, the children have a whole stage set up in the playroom ‘where our kids often have a band’; also seen are a selection of Takashi Murakami Flower Cushions, which cost between $600 and $6,000 each 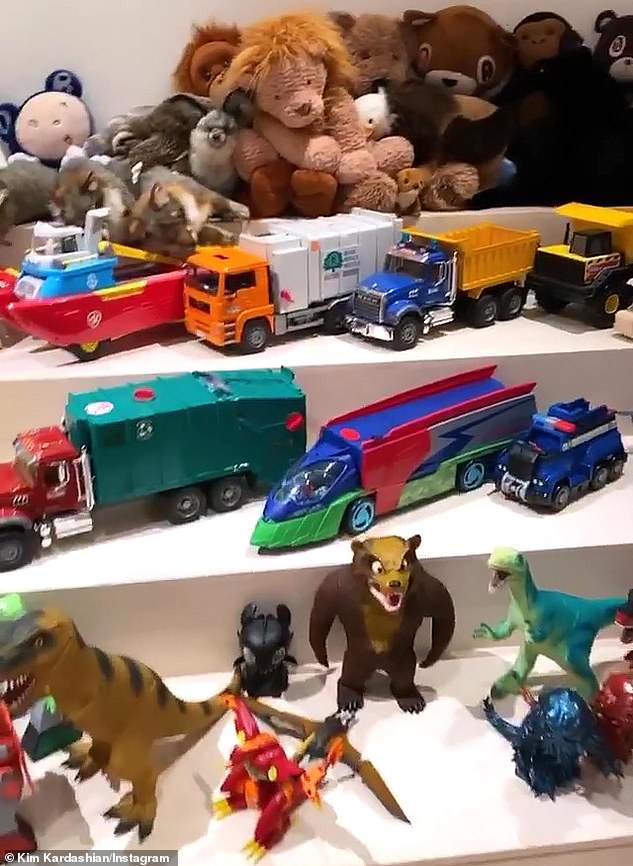 The Keeping Up With The Kardashians star revealed just what kinds of toys her four children – North, six, Saint, four, Chicago, two, and Psalm, nine months, who she has with her husband Kanye West – have to play with.

Taking to Instagram, she referenced previous comments about her house before sharing: ‘You guys always say my house is so minimal – well, you guys haven’t seen my playroom.’

Showing off the room, she first pointed out the concert-like stage where her kids ‘often have band’, with a drum set placed on it as well as a number of microphones. Stacked to the side was a basket of guitars and ukeles, and some music bags containing other instruments. 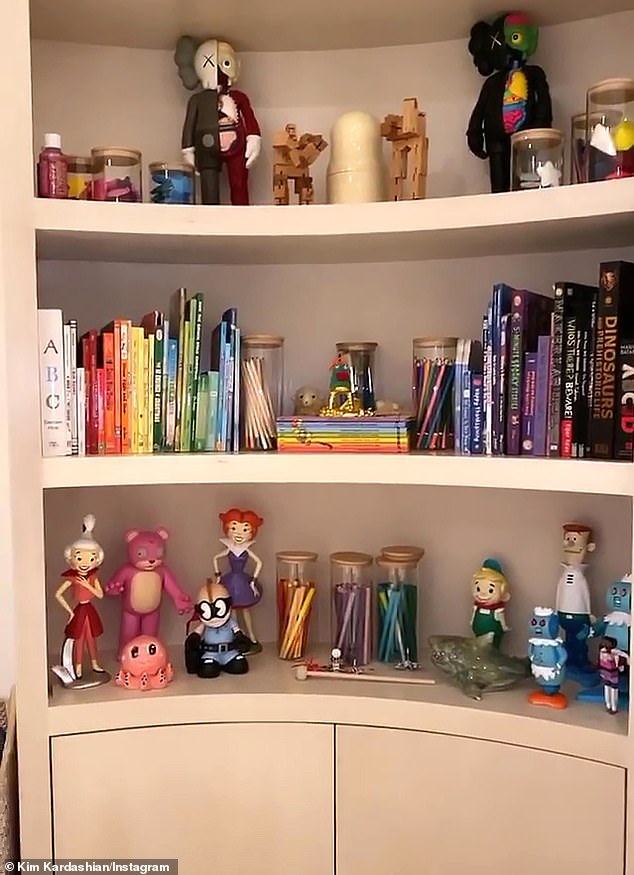 Young minds: Kim then brought the camera over to a bookcase full of ‘organized educational stuff for their homework that they sit and do here,’ at a nearby blonde wood table

What a setup: North has a couple of dollhouses and a row of ‘OMG dolls that she’s obsessed with’ (left), while Chicago has toy prams complete with plastic babies

Nearby was a selection of Takashi Murakami Flower Cushions, which can cost anything between $600 and $6,000 each.

A selection of horses, a ball pit with a slide attached, a variety of dollhouses and baby carriages for the kids to play with. There is also a projector for watching movies or cartoons on. 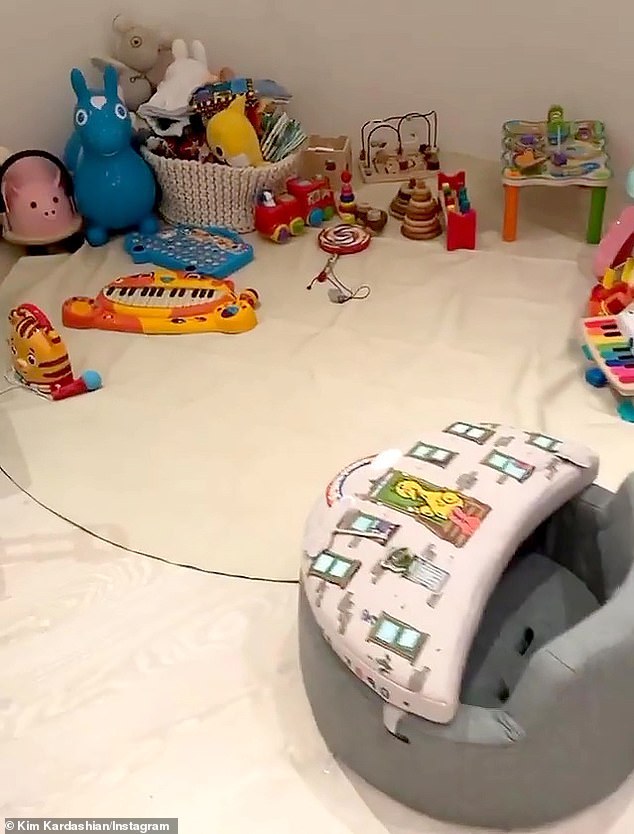 Baby mine: Psalm’s toys were gathered at a corner of the room near the same

There is also a grocery set up for her daughter Chicago, including a cash register, a conveyor belt and all the products you could need, as well as a laundry area too.

Showing it all off to her fans, she shared of the playroom: ‘This is Chi’s world over here. You can actually ring people up in the grocery store.’ 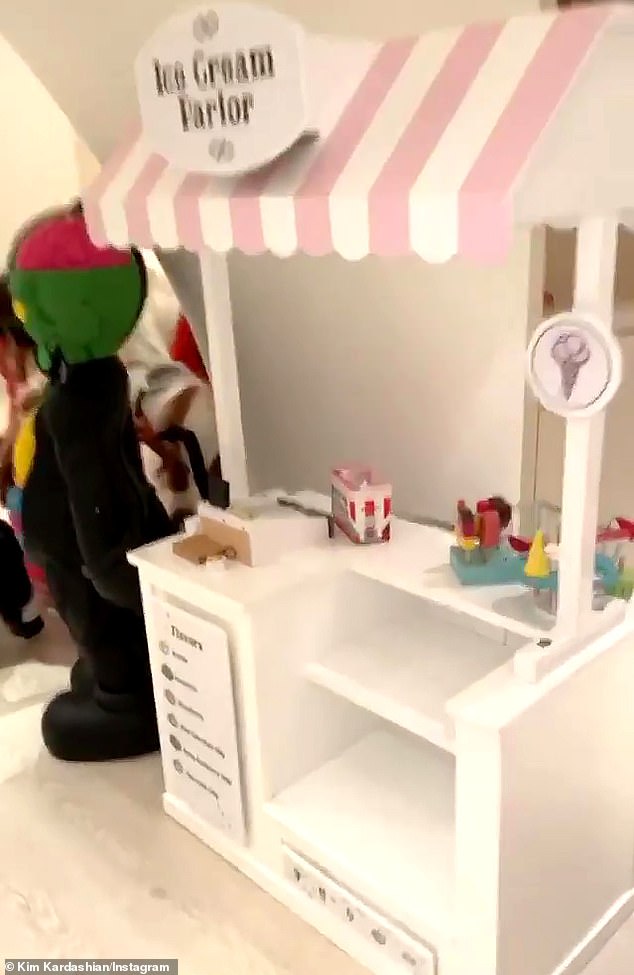 Variety: Over in ‘Chi’s world,’ there is a mini ice cream stand with a canopy as well as a toy supermarket, kitchen, washer-dryer and shopping carts 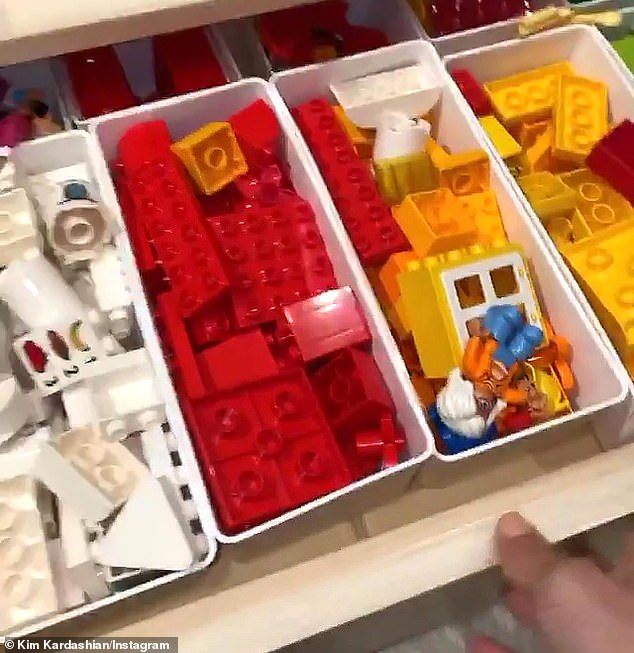 So well-organized: Underneath the shelves were a row of drawers that were all full Legos, which as Kim pointed out were ‘color-coordinated usually’