Kourtney Kardashian may be 41-years-old but she can still have fun in the sun like a teenager, which she proved on Friday.

The Keeping Up with The Kardashians star shared several images to Instagram from her vacation in French Polynesia to help sister Kim celebrate her 40th birthday in October.

Not only did the mother of three romp around in a string bikini with pals but she also showed off the ingredients for their cocktails making the trip look like an epic spring break even though it’s autumn. 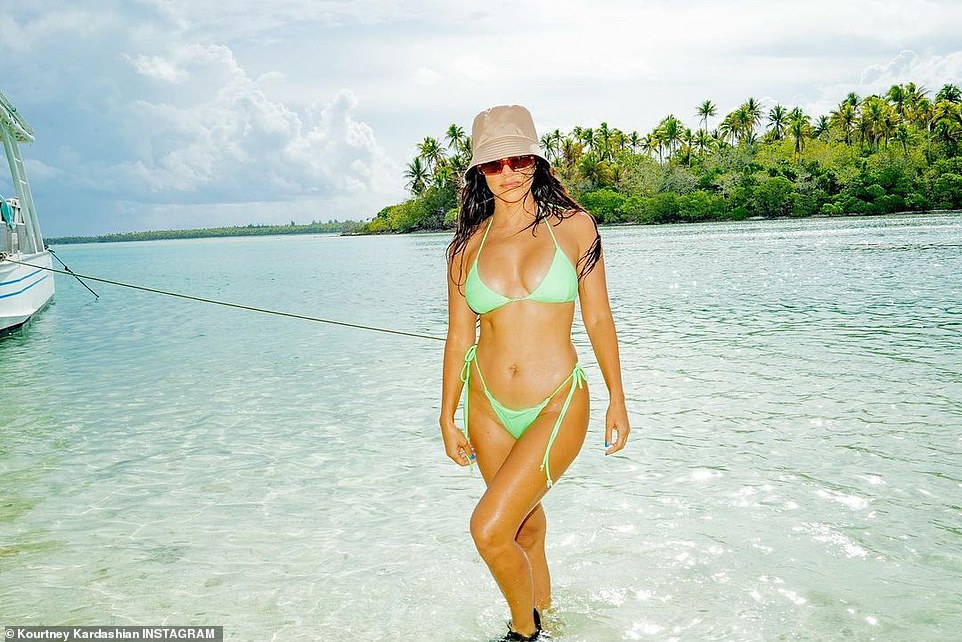 Teen spirit: Kourtney Kardashian may be 41-years-old but she can still have some fun in the sun like a teenager, which she proved on Friday 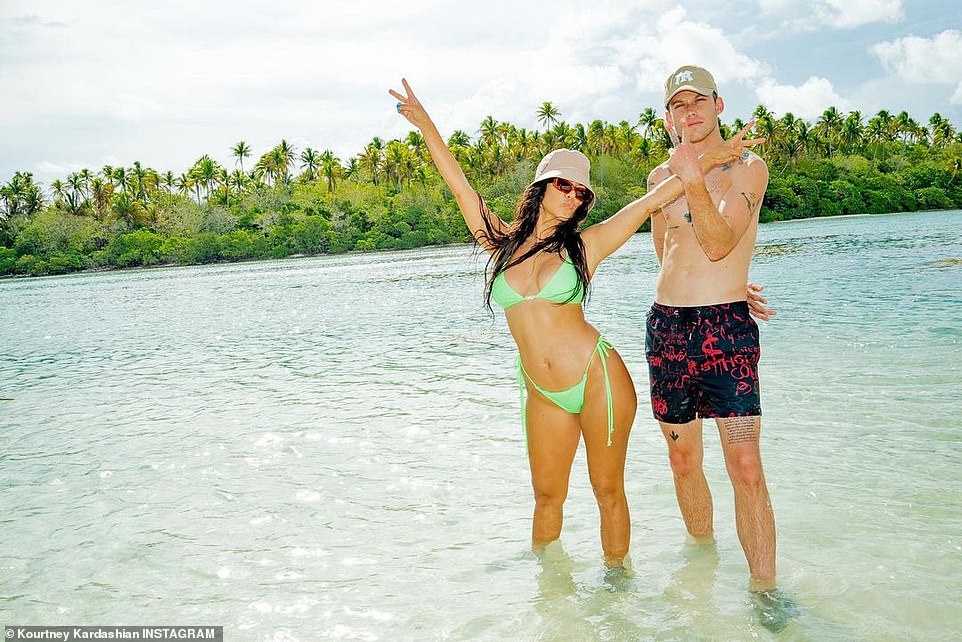 Party girl: The Keeping Up with The Kardashians star shared several images to Instagram from her vacation in French Polynesia s to help sister Kim celebrate her 40th birthday in October

The curvy but petite wonder looked flawless in her bring green suit that showed off her abs, slender hips, toned arms and sculpted legs thanks to daily workouts.

The Poosh founder had her black hair wet and worn down over her shoulders with a beige fishing hat on as she had on light makeup.

The Dash Dolls star stood in the shore as she posed away and was also seen running into the crystal blue water with a friend. 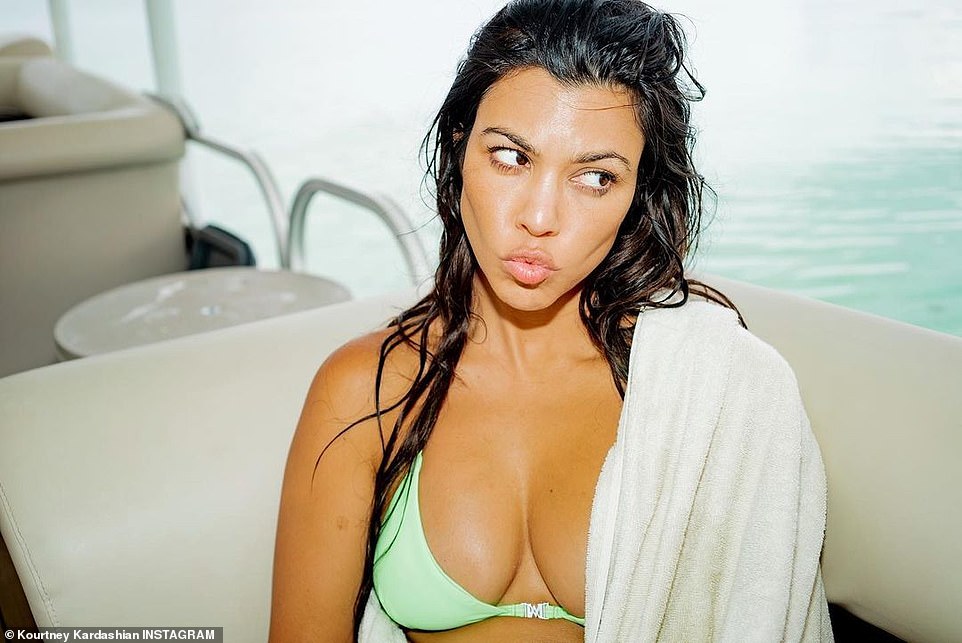 A female Peter Pan: Not only did the mother of three romp around in a string bikini with pals but she also showed off the ingredients for their cocktails making the trip look like spring break 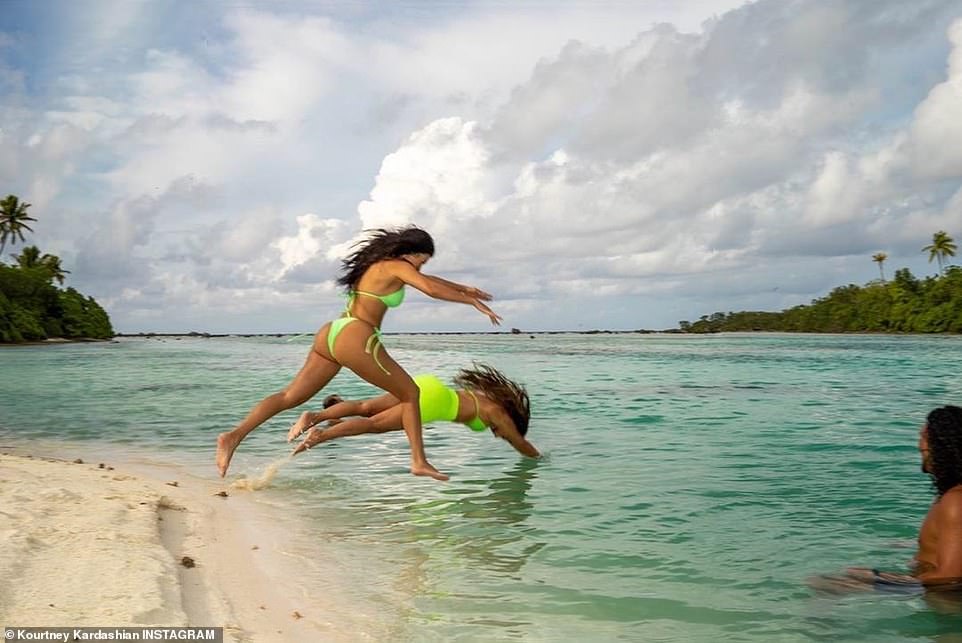 Splish splash in the sun: The curvy but petite wonder looked flawless in her bring green suit that showed off her abs, slender hips, toned arms and sculpted legs thanks to daily workouts 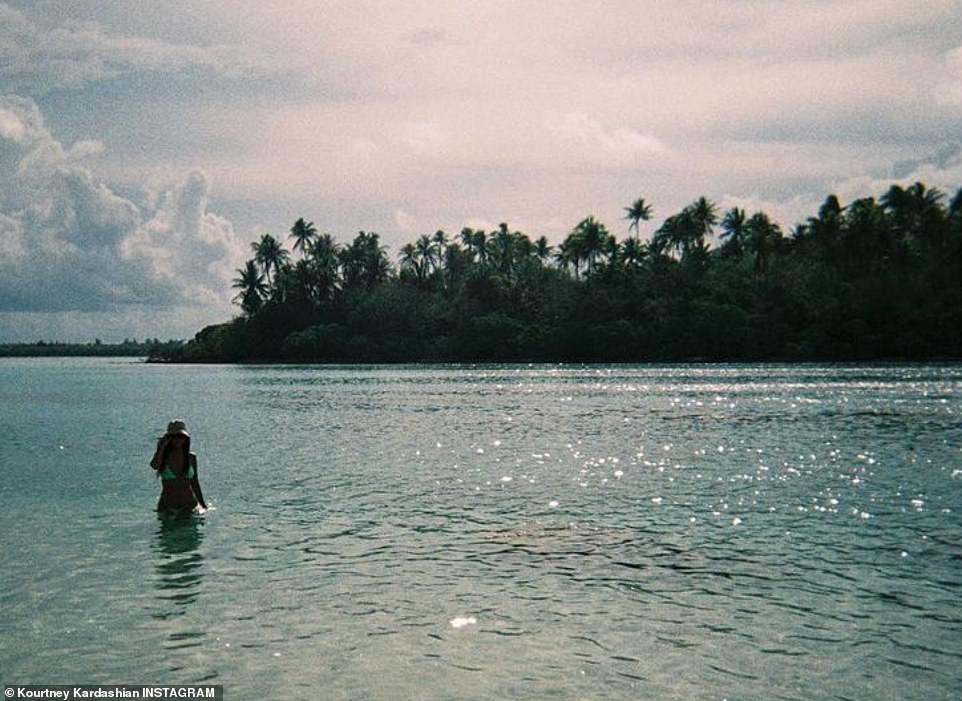 See me? The Poosh founder had her black hair wet and worn down over her shoulders with a beige fishing hat on as she had on light makeup 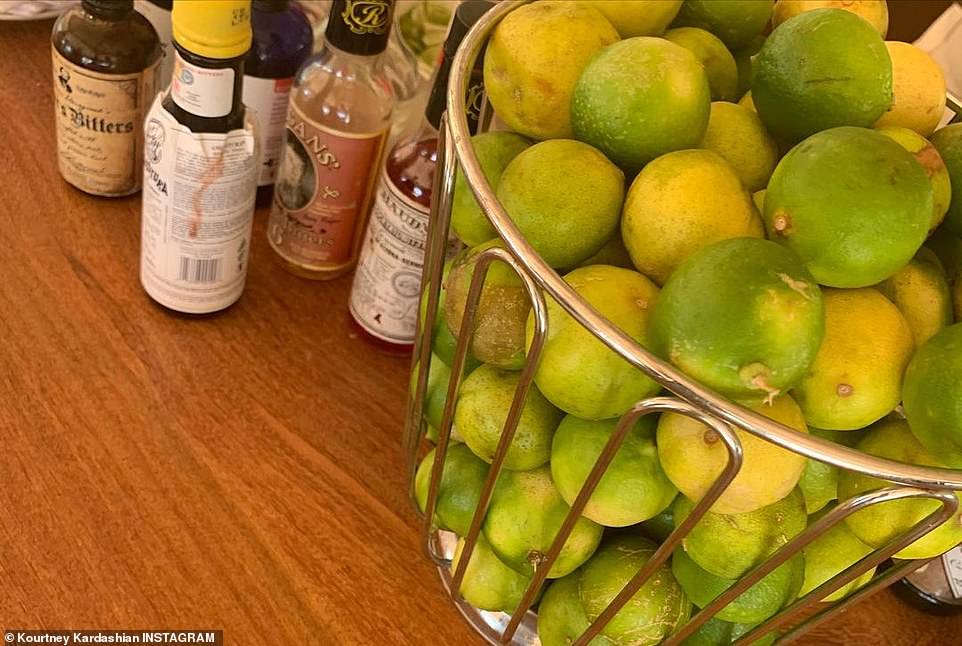 Time to drink up: The siren also showed off the ingredients for her cocktails which included limes and bitters

The skies were filled with clouds and the sand was white on Onetahi in French Polynesia.

The island is named after actor Marlon Brando, who once called the oasis his own private property.

Her three kids – Mason, Penelope and Reign – were not seen in the new images.

The star was on the trip for Kim, and Khloe and Kendall were seen there as well. She shared other photos from the trip last month as well.

Also on the trip was her longtime friend LaLa Anthony who wore a red suit. And there were images of Jenner pal Fai Khadra who first befriended Kendall Jenner but then got close to Kourtney.

Kourtney’s ex Scott Disick was also part of the festivities as was Simon Huck. 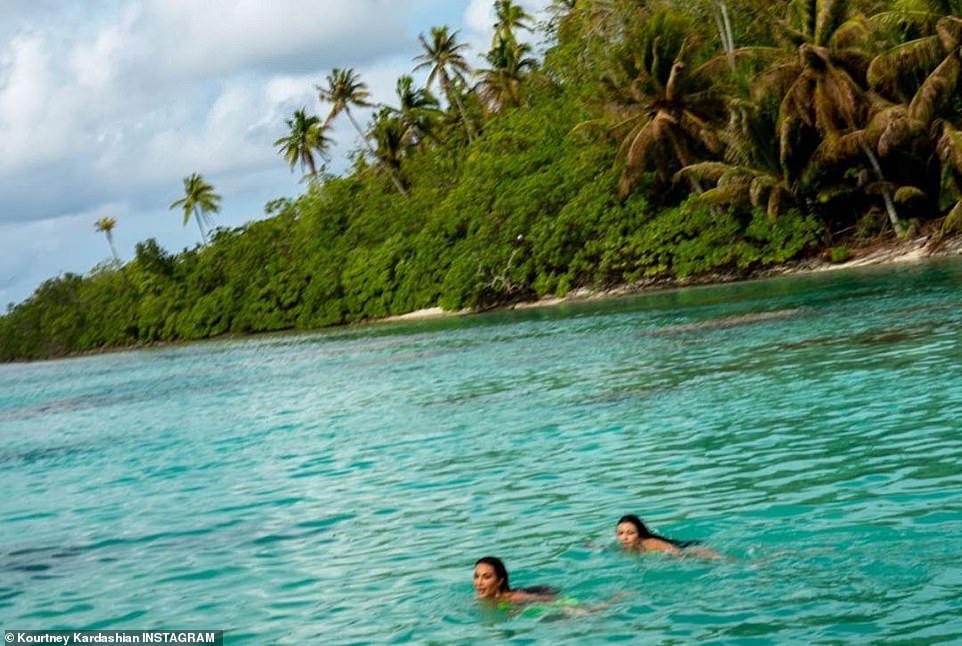 Balmy with Kim by her side: The skies were filled with clouds and the sand was white. Her three kids – Mason, Penelope and Reign – were not seen in the new images

These photos have been shared just weeks after the TV star flooded her Poosh website with stories on how to deal with anxiety.

One was titled Foods That Help Reduce Anxiety with another called Anti-Stress Activities For Adults. And there was even an essay on How Trauma Changes The Way Your Brain Works. ‘Where knowledge resides, anxiety fails to exist. Anxiety loves the unknown,’ said the 41-year-old star.

She added: ‘It thrives there like a rampant tangled rain forest. On the other hand, because there always is one, I’m sure you’ve come upon the tiniest weed pushing its way through a crack in the cement.

‘It gives you hope because you recognize its power to survive. It fearlessly grows with the knowledge that it can. Knowledge is power. When you seize that power of knowledge, you create the crack in the cement. Be the weed.’ 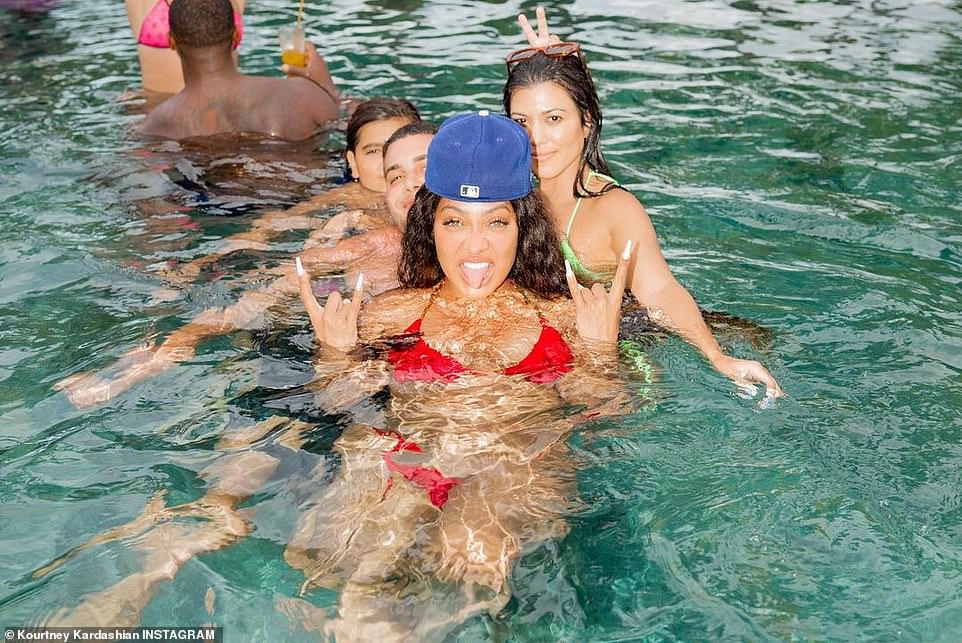 So many friends: Kourtney is seen on the right with LaLa Anthony as well as Fai Khadra and Mason 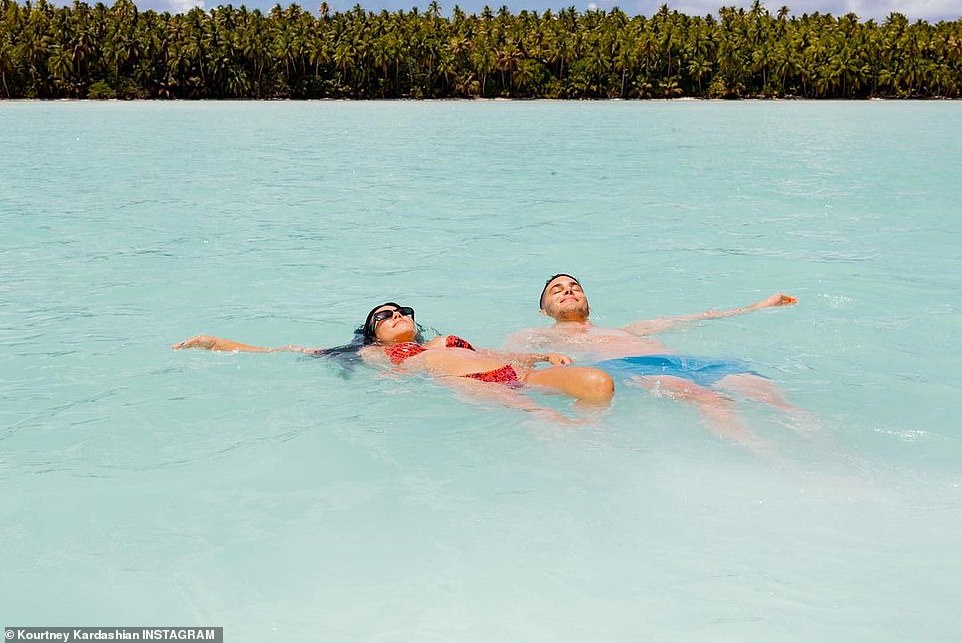 Birthday time: The star was on the trip for Kim, and Khloe and Kendall were seen there as well. She shared other photos from the trip last month as well

The looker added, ‘This temporary chaos brings us a gift: the gift to acquire the grace of living in the moment.

‘Anxiety is experienced by focusing on our past or trying to control our future. Of course, our past impacts where we are today. And certainly, we have hopes for the future.

‘But we have the greatest opportunity now to reclaim ourselves and our humanity.’

The sister of Kim Kardashian then said: ‘To truly acknowledge our needs and value others. 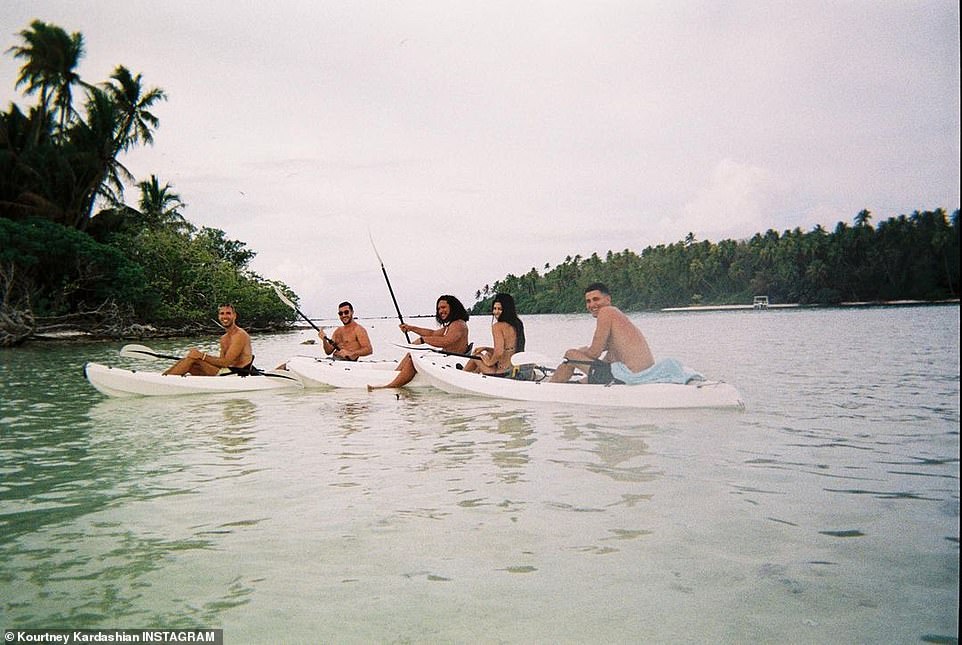 Dreamy location: Onetahi, is north of Tahiti, and is named after actor Marlon Brando

‘To understand that we are intricately linked to one another and to something greater than ourselves. In that, anxiety has no place. It is an immeasurable gift if we choose to take it.

‘And in this single instance, re-gifting makes joyous sense.’

The college graduate then said if anxiety is the fear of the unknown then’ you are in essence afraid of nothing.’

Kardashian then broke down the foods that can help reduce anxiety.

‘Turmeric is at the top of the list. Turmeric’s most medicinal compound is curcumin. It’s known to reduce inflammation. 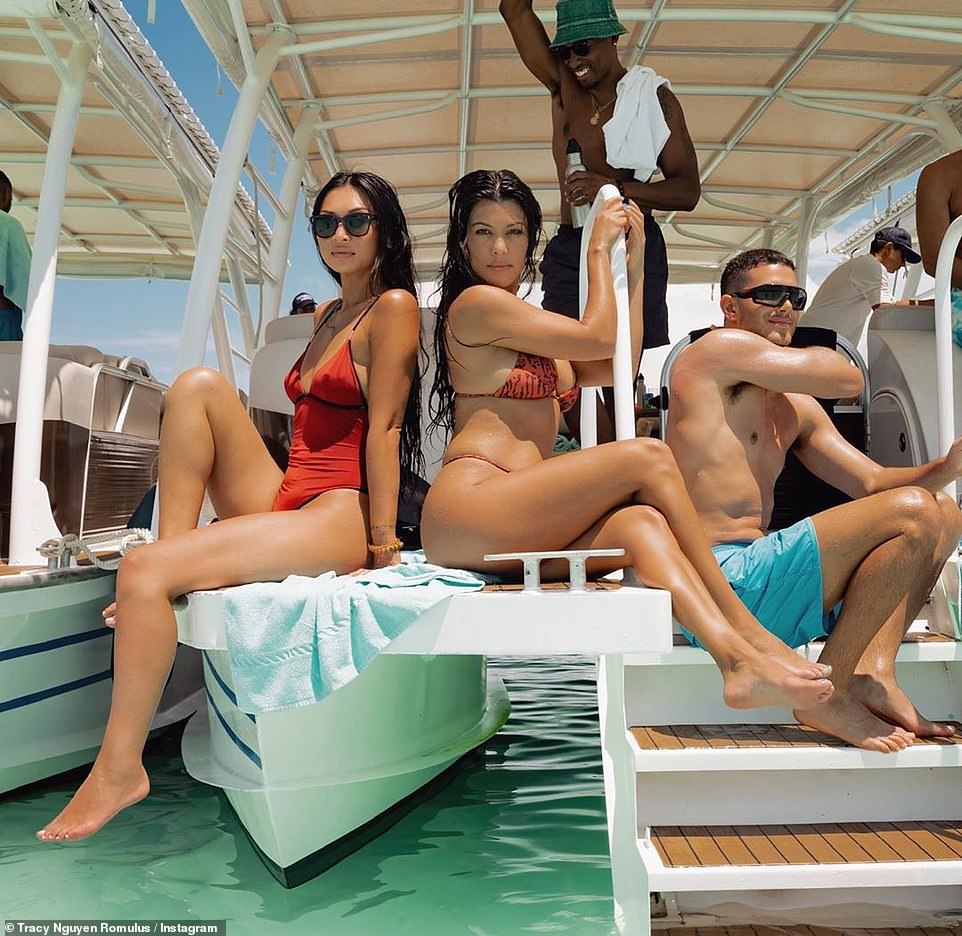 Hanging out with a longtime friend: Kourtney is seen here with Kim’s pal Tracy Nguyen Romulus 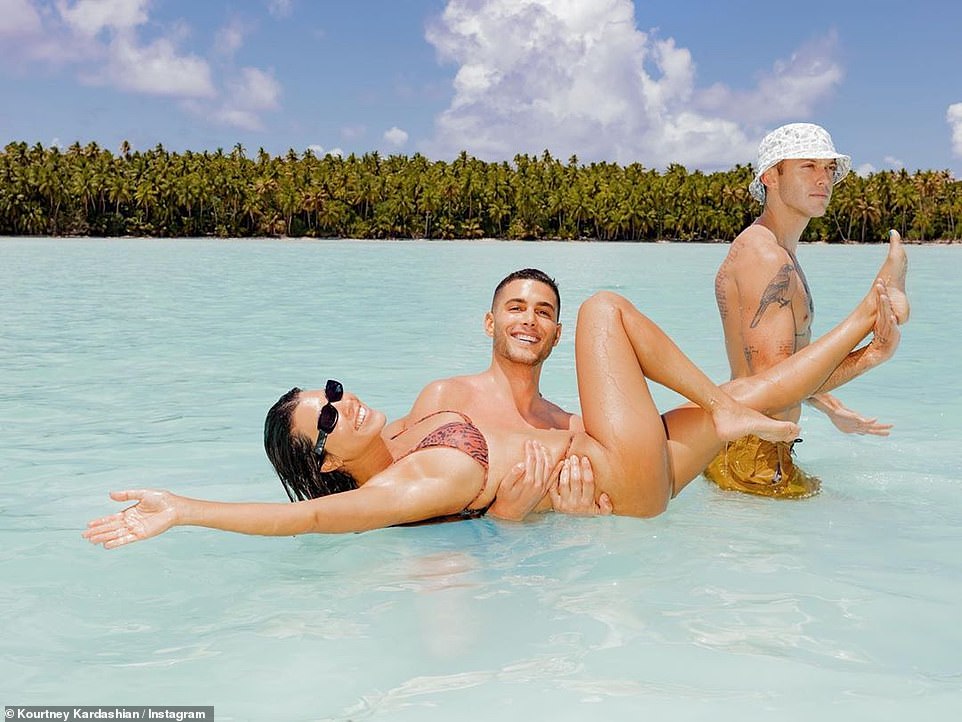 Getting a helping hand from a handsome boy: In this older image, Kourtney was propped up while in a pink bikini

‘Inflammation and anxiety are linked.

‘Brew a pot of turmeric tea for the day. Simply simmer turmeric, ginger, a pinch of black pepper, pinch of cinnamon, freshly squeezed lemon juice, honey, and ginger. Traditionally known as golden milk, this Ayurvedic drink even sounds soothing. Its golden color can even remind you there is light on the horizon.

‘Ayurveda is one of the world’s oldest holistic medical systems, developed more than 7,000 years ago in India. For anxiety reprieve, I said not to live in the past. I did not say not to learn from it. In this moment of human reset, embracing knowledge from our roots is essential.

Anxiety is sometimes fueled by nutritional deficiencies or dehydration, it was added. 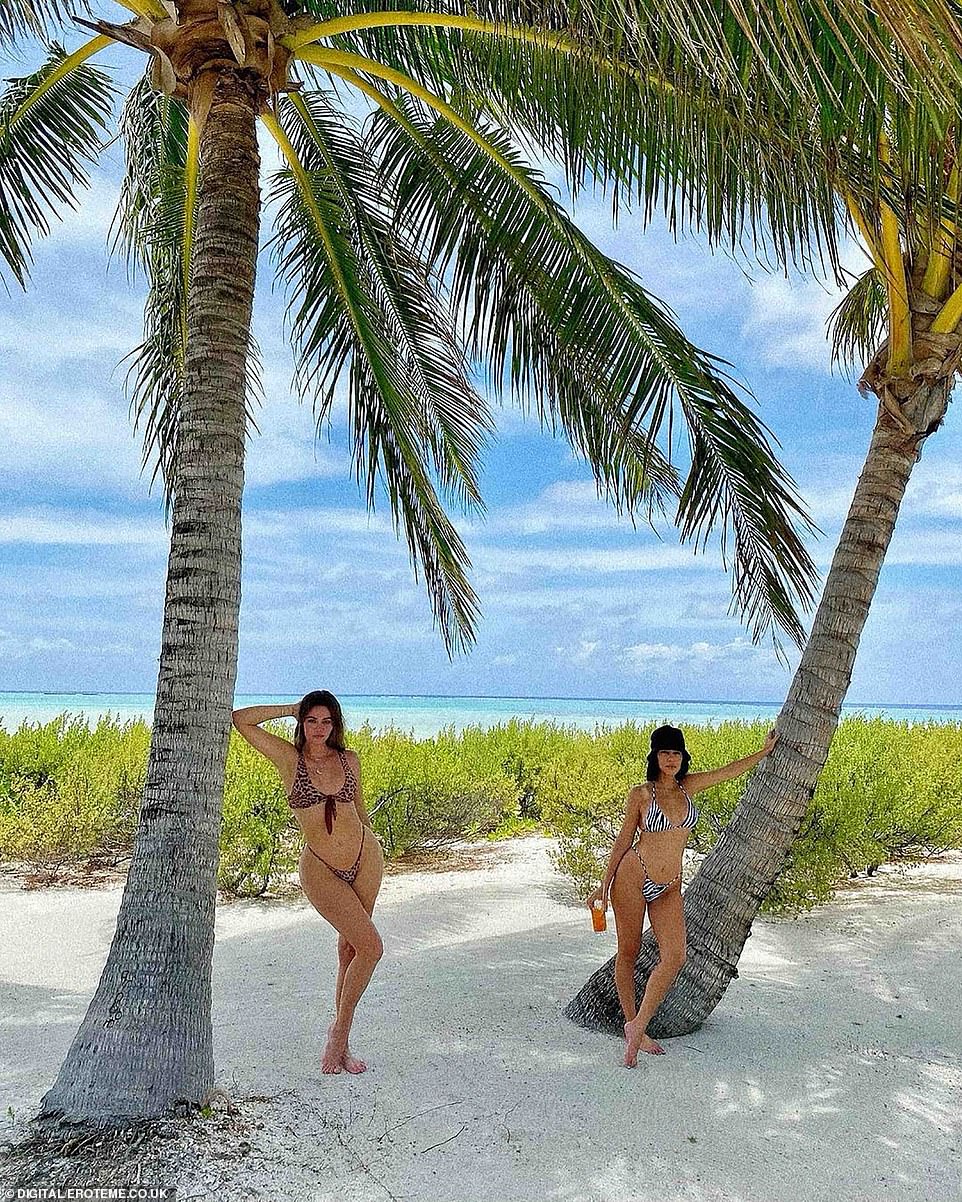 Just two gals by some palm trees: In October this image was shared of Kourtney with sister Khloe, 36

She added that a plant-based diet eases stress and foods high in magnesium and vitamin D, cooked leafy greens, omega 3s, fruits, the rainbow all help.

‘How you eat is as important as what you eat. Eat with the seasons. Eat with your unique constitution in mind,’ she said.

‘Eat mindfully. And eat with pleasure… food nourishes the body and soul. When both are nourished well, there is calm. It’s difficult to refuse calm.’

The next article was about how to de-stress. 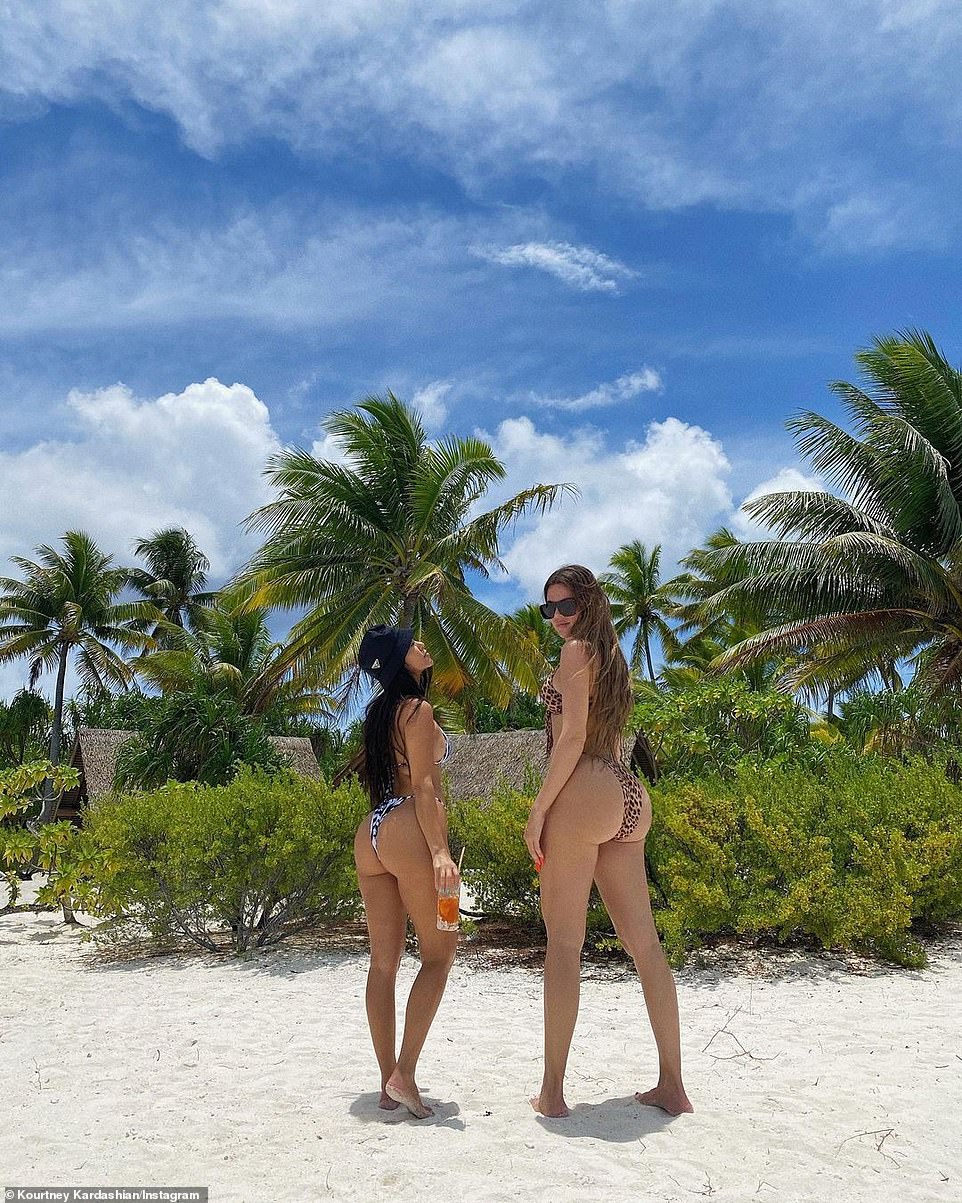 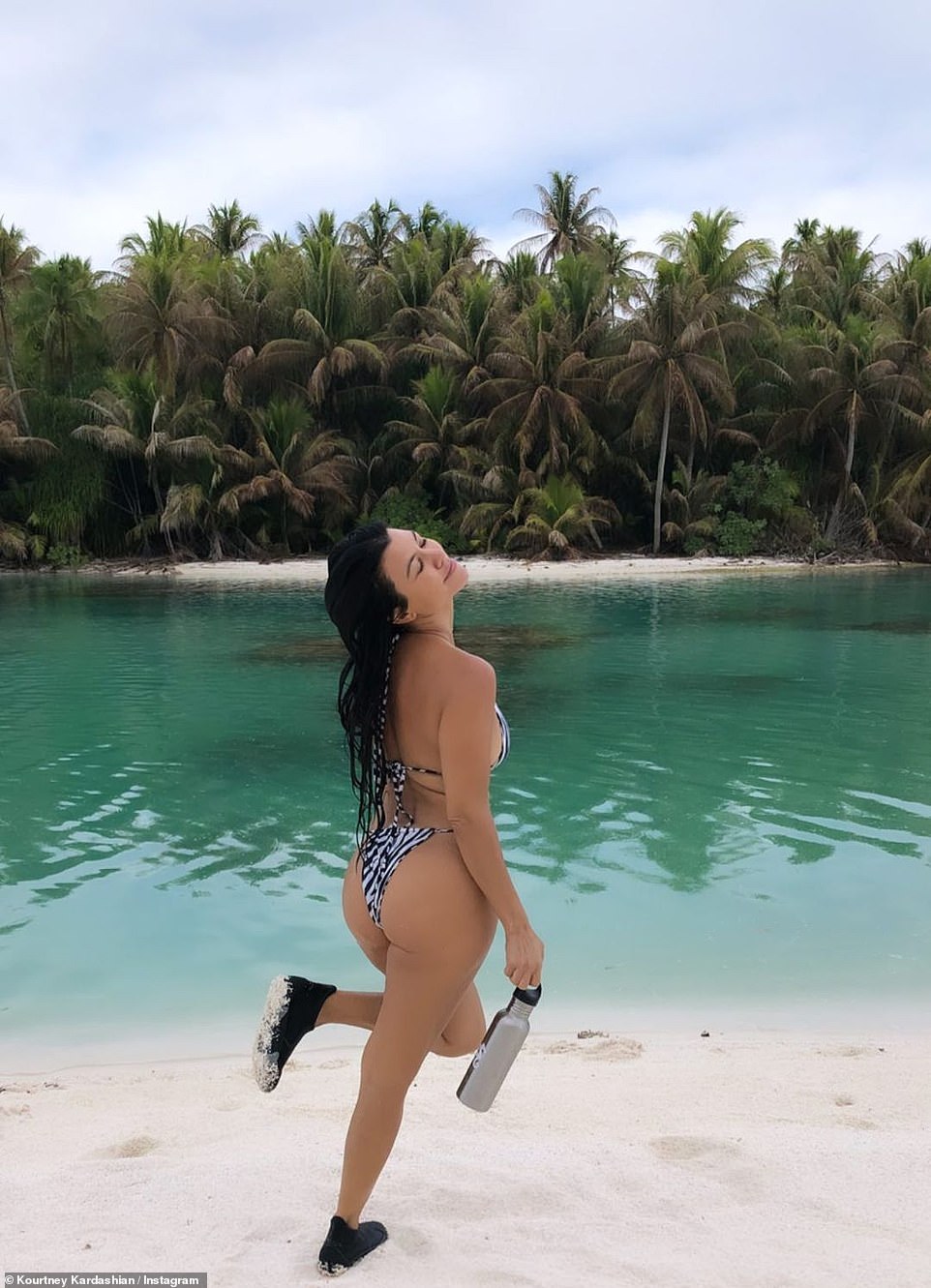 ‘These are, of course, unprecedented times. We are in the midst of a global pandemic, a social revolution, economic upheaval, and loads of uncertainty. Even without these circumstances, our modern world is a breeding ground for daily stress. The worries of today are more nuanced, complex, and plentiful than ever before.’

Kourtney suggested Coloring Books: ‘If you thought coloring in the lines (or outside—your coloring book, your rules!) was just for kids, you thought wrong. Coloring books offer a special kind of zen, allowing you to feel a sense of creativity and purpose, while also entering a somewhat meditative state. The activity is so relaxing, there is a high demand for them in cancer wards for patients undergoing chemoradiotherapy under immense duress.

And Gardening is also helpful: ‘Even if we don’t have a green thumb or a large outdoor space, finding a way to connect with our earth, plants, and sources of food is a very effective way to anchor our minds. Even planting seeds indoors, like in recycled egg cartons to sprout seedlings for transplanting or gifting, allows us to get our hands in the dirt and ourselves out of our own minds. Joining a community garden has serious benefits, too, like increased physical activity, a connection to the neighborhood, and improved nutrition. 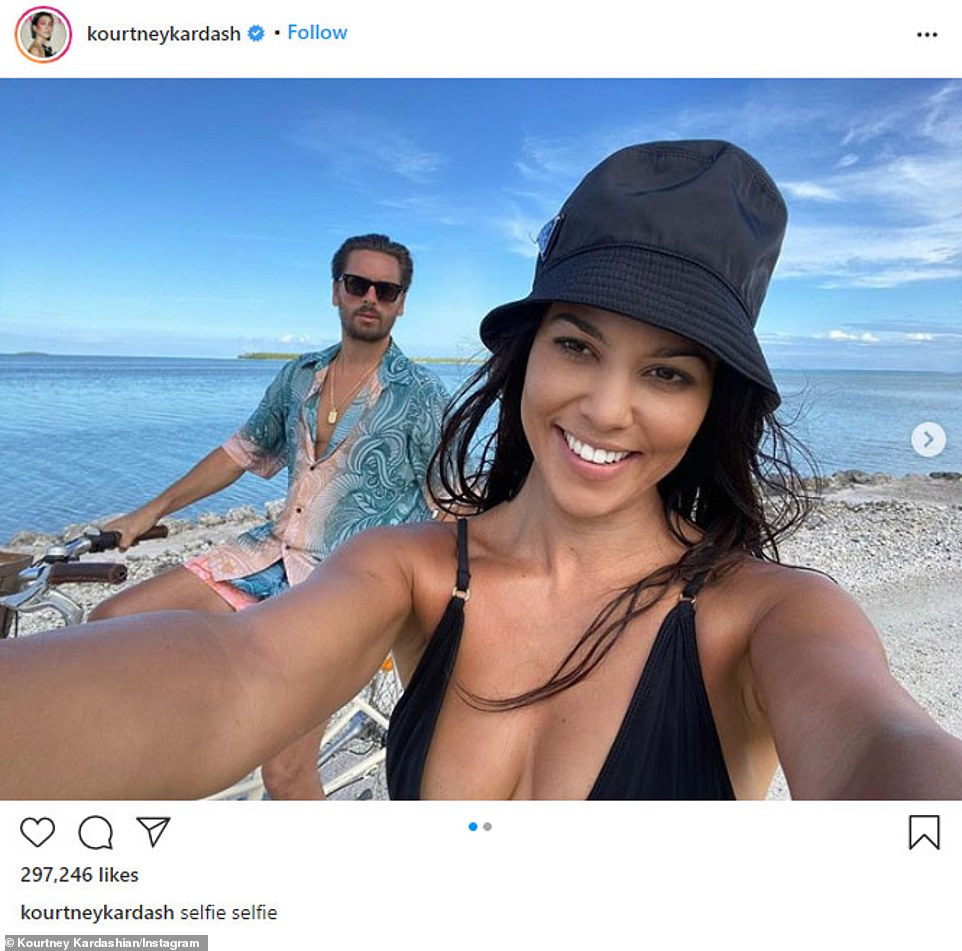 Fun with her ex: Though they have been broken up for many years, Kourtney still takes her ex Scott Disick on vacation

Then there are Quick Bursts of Movement: ‘For some, a seriously sweaty workout is a great way to blow off some steam. But if chronic stress is more the concern rather than an anxious moment or two, high-intensity workouts can have the opposite effect. Intense workouts can increase cortisol, making anxiety worse. If you’re having an anxious moment that makes you feel pent up, try a quick burst of movement, like 50 jump-rope skips, 20 jumping jacks, 10 crunches, or dancing like no one’s watching to one song. It’ll relieve some pressure without adding to the problem.’

And a Scalp Massage never hurt.

‘Studies show that massaging the scalp has significant effects on cortisol levels and heart rate, not to mention it feels really freaking good. Don’t just wait for your next hair appointment (because who knows when that will be). DIY your own scalp massage, whenever, wherever!’

Another story was called How Trauma Changes The Way Your Brain Works.

Here she said, ‘Trauma comes in all shapes and sizes. It can be emotional trauma, physical trauma, or trauma caused by prolonged, chronic stress or unhealthy social, political, or romantic relationships.

‘Oftentimes, trauma is not a fleeting experience, but rather something felt throughout the entire body, reverberating in the way we think, feel, and process information in the future.’ 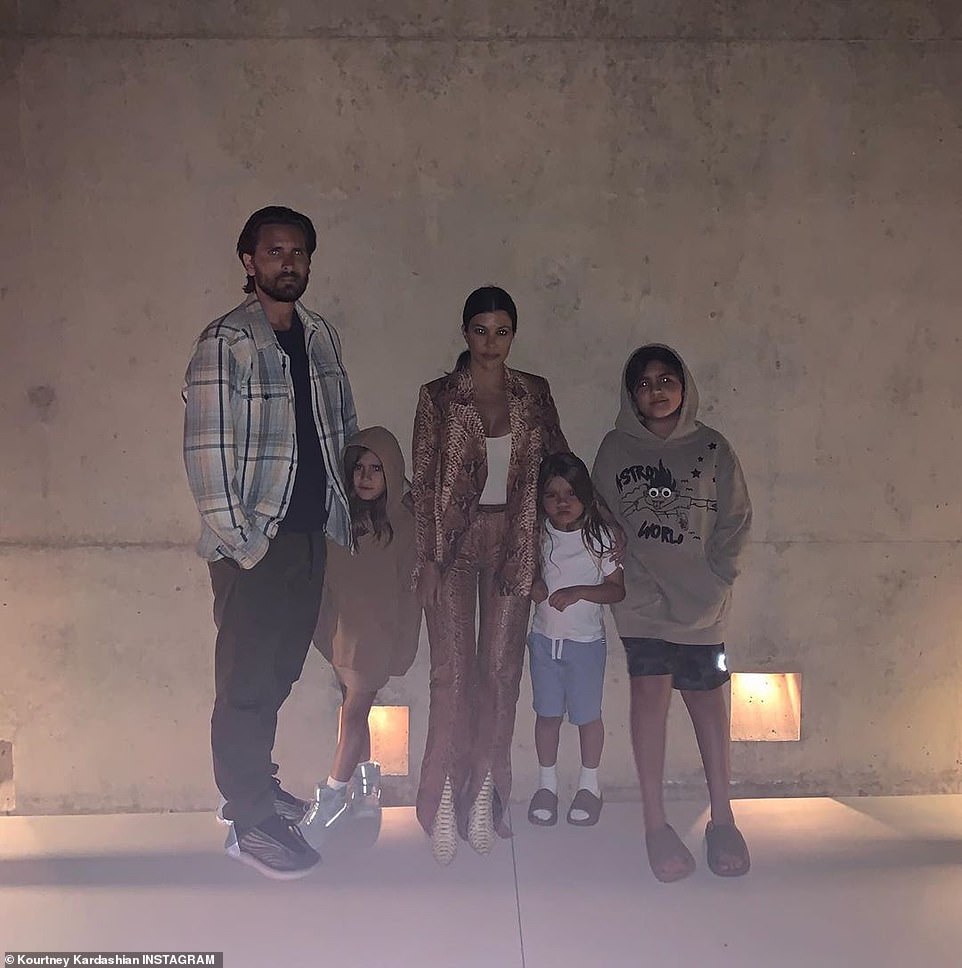 She has three kids with this guy: The star with Mason, Penelope and Reign as well as ex partner Scott Disick

The Keeping Up With The Kardashians star added: ‘Traumatic stress can cause lasting changes in certain areas of the brain. The amygdala, hippocampus, and prefrontal cortex are all affected by traumatic stress, typically due to increased cortisol production as well as norepinephrine response, which is both a hormone and neurotransmitter that increases heart rate.

‘After experiencing traumatic stress, both cortisol and norepinephrine are quick to release in times of more typical daily stress, causing the body to go into a panicked state regularly.’

The TV veteran also said: ‘The amygdala can be found in the middle of the temporal lobe. Its purpose is to detect real threats and activate our fight-or-flight response in the sympathetic nervous system. It also helps us to store new memories about threat-related situations so we can avoid them in the future.

‘The prefrontal cortex’s role is to mitigate unwarranted reactions, regulate attention and situational awareness, and help us to make the best decisions in potentially stressful situations. The function of the hippocampus is within the realm of learning and memory. It’s flexible and changeable and can be damaged by different stimuli.’