Kourtney Kardashian shared just one of the many ways she maintains her killer figure.

The 41-year-old Poosh founder worked up a sweat with a friend during an aerial Pilates session shared on Instagram Sunday.

Flashing her toned body in a black sports bra and Calvin Klein briefs, she worked through a series of core-intensive moves. 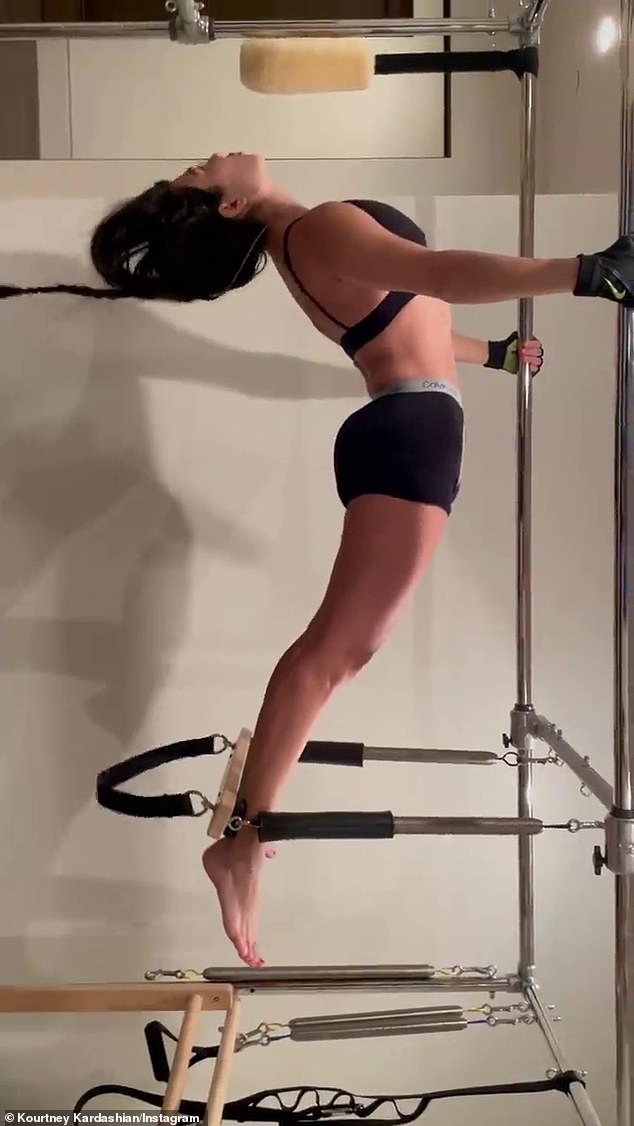 Tiny but mighty, she seemed to master the moves while being coached by a personal trainer.

Opting for a no fuss look she appeared makeup free and kept her hair tied back in a braid as she hung from the reformer.

Her workout music of choice was Busta Rhymes as she got in the zone and she protected her hands from any bar-related burn with gloves. 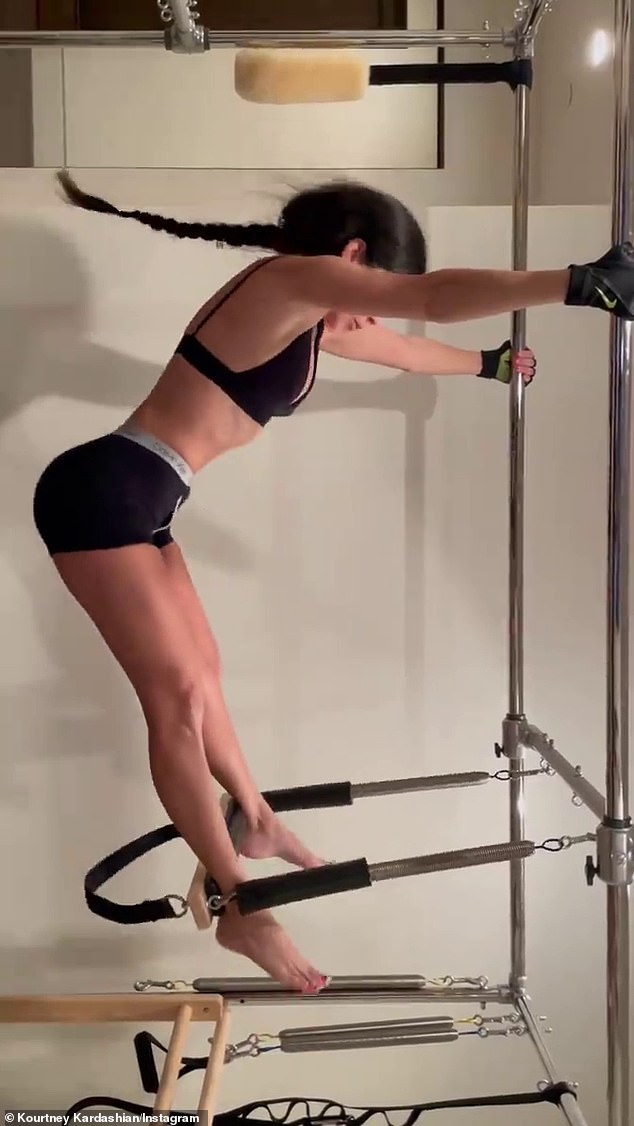 Full body workout: Opting for a no fuss look she appeared makeup free and kept her hair tied back in a braid

Less is more: Prepared to work up a sweat she opted for little clothing as she showed off her toned body in a bra and briefs 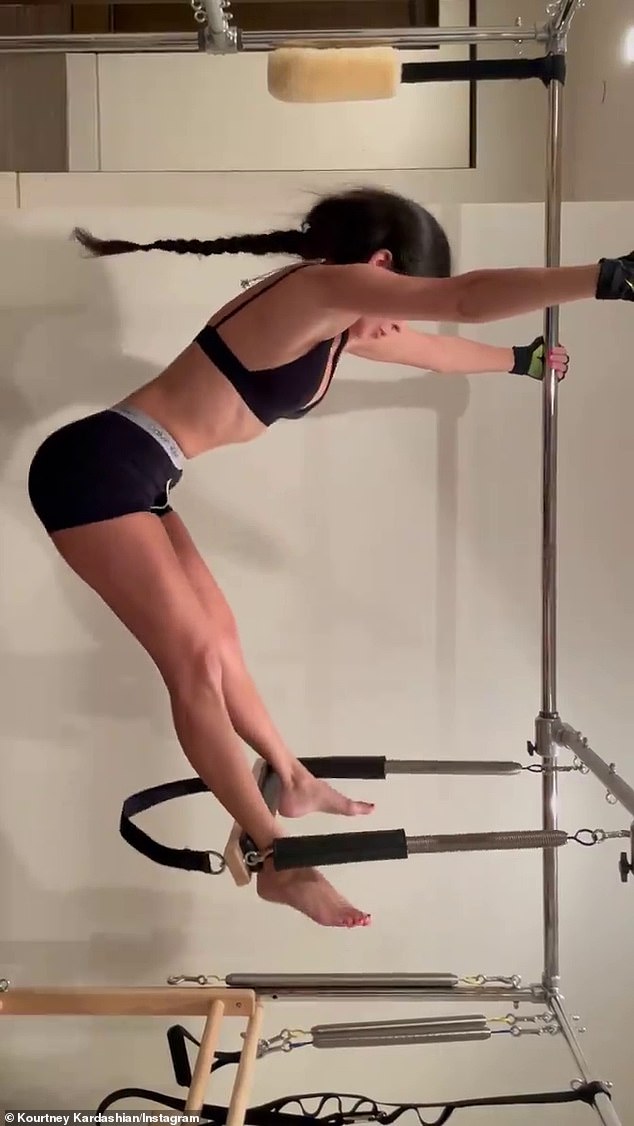 Protection: The Poosh founder sported grip gloves to protect her hands from any rugburn

She looked every bit the budding trapeze artist as she had her feet rested on the bar as she arched her body back and forth.

Recently she returned from a luxury sister getaway in Turks and Caicos as she continued to show off her hard earned body in a variety of bathing suits.

It seems that Kourtney also has a new man in her life as she has been spending time with longtime friend and Blink-182 drummer Travis Barker.

Much to his delight, she loaded up on the bikini content as he continued to post flirty comments on her posts including ‘yessss’ when she shared a snap and said ‘orange you glad I’m still posting trip pics?’ 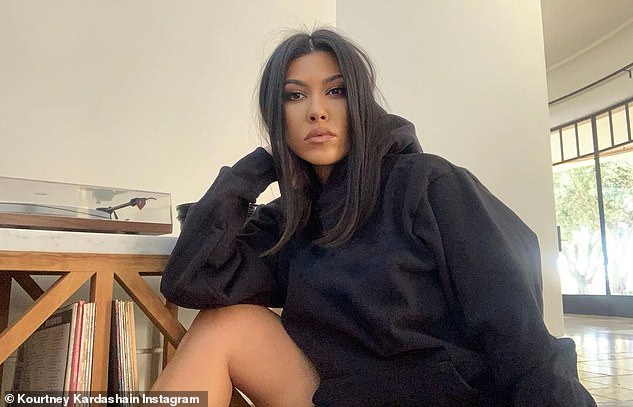 Keep it tight: With a new man in her life, Kardashian continues to make sure her figure is in tip top shape 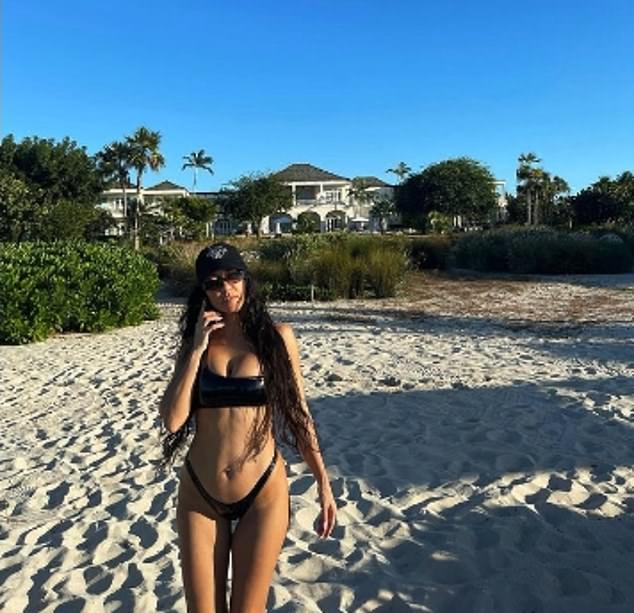 Bikini bod: On her vacation to Turks and Caicos she sported a variety of bikinis and flashed her amazing abs

Flirty comments: The Blink-182 drummer has been leaving comments on virtually all of her Instagram posts

Fans first started to speculate the two may be an item about a month ago when she posted a photo of his favorite movie on Instagram and he began to appear in her comments section.

From there things continued to heat up as they spent the weekend together in Palm Springs both posting content from Kris Jenner’s pool.

Though he had been on the record in an old Us Weekly interview saying that he once had ‘a crush’ on her sister Kim Kardashian, nothing ever happened between the pair. 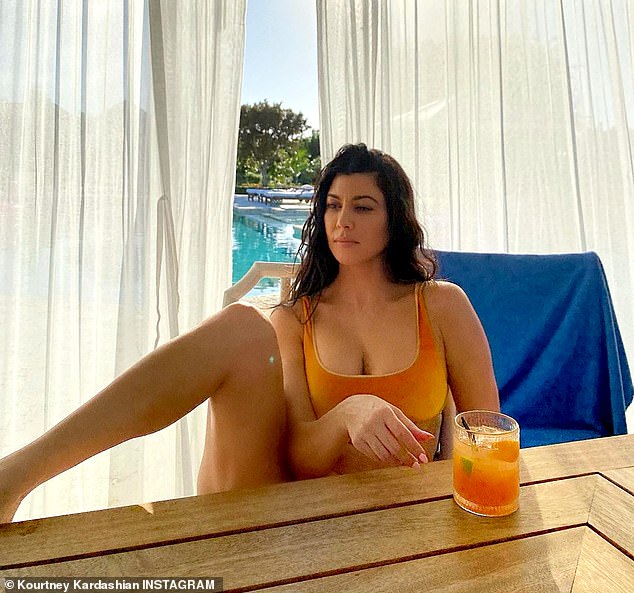 Longtime friends: Both residing in the same Hidden Hills community the pair have been friends for many years and their kids know each other well

Kourtney and Travis have been friends for years,  with many speculating the two had a thing. Barker shut down rumors in March 2019 as he told People:

‘Kourtney’s like a dear friend. That’s it…I love her to death. I love her family to death. But yeah, just friends.’

Things took a turn and the pair have definitely been hanging out with a source saying that he had always liked her but things are not super ‘serious’ between them and she wants to keep their relationship semi-private.

An insider told ET, ‘Kourtney loves the way Travis is a dad and he makes her laugh hysterically. She loves that about him, and the family is fond of him too.’ 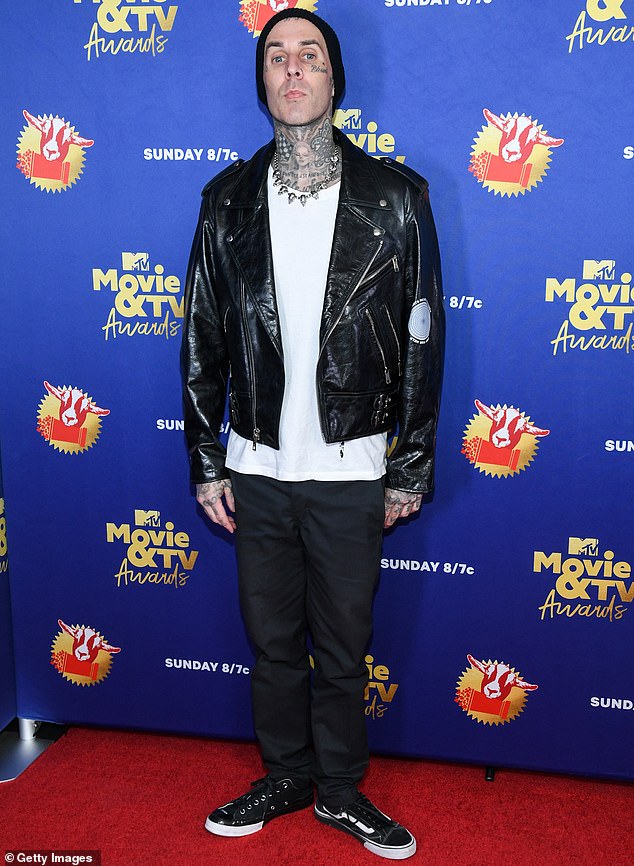 A good fit: ‘Kourtney loves the way Travis is a dad and he makes her laugh hysterically. She loves that about him, and the family is fond of him too,’ an insider told ET; pictured 2020