Kylie Jenner shared a photo of herself standing in front of her $72M private jet, Kylie Air, ahead of Christmas Eve.

The 23-year-old makeup mogul flaunted her toned abs in a nude crop top and pair of white Chrome Hearts jeans before she jetted out of town on Wednesday afternoon.

With her expert glam that featured a sultry smokey eye and a long auburn braid, she spared no expense for a luxurious flying look as she posed for some snaps before hopping aboard her plane.

Toned and tanned: Kylie Jenner, 23, flashes her toned abs in a baby-sized nude crop top as she stands in front of her $72M private jet before jetting out of town ahead of Christmas Eve

Showing off the results of her recent workouts, Kylie flashed her flat stomach in the baby sized top that hit right below her bust.

The white jeans featured leopard print crosses all down the legs as she angled her body in a range of poses while grabbing her exaggerated braid.

With a white furry bag fastened under her arm and her usual display of hefty diamonds that included a stack on her middle finger and four carat studs, she exuded opulence. 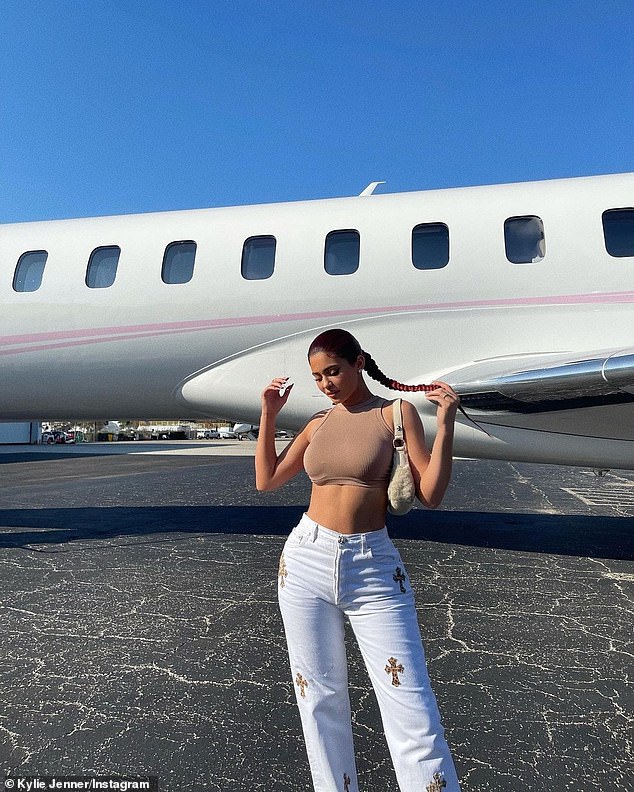 Luxury: Not shy about flaunting her enormous wealth, Kylie posed in front of her Kylie Air jet in winter white pants that she paired with a furry purse

Standing by her massive private plane with a baby pink design running down it’s exterior she captioned the photo set, ‘tomorrow is xmas eve’ with a white heart before she shared footage of herself flying high.

Though she and the rest of the family vowed that they were cancelling the annual Kardashian Christmas party for the first time in almost 40 years, it seems the family still plans to celebrate together with their immediate family.

Seemingly unaware about the insensitive nature of her content – not only bragging that she was traveling to see her family for the holidays but also that she was doing so via private jet – Kylie looked blissful before sharing some close up details of her outfit on social media. 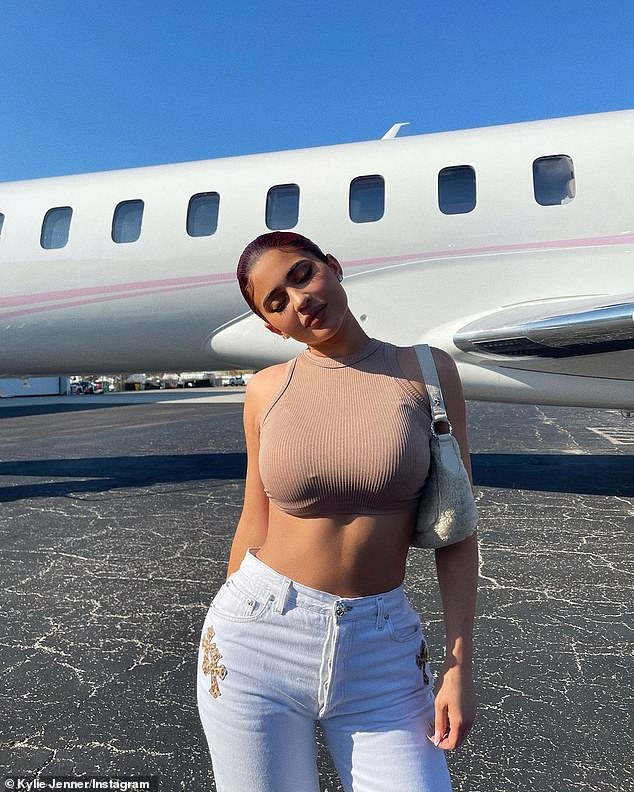 Privileged to a fault: Though the family vowed they were cancelling their annual Christmas gathering this year, it was apparent the immediate members would still be celebrating together as Kylie referenced getting out of town before Christmas Eve

Far stretched: Kylie displayed her already exaggerated facial structure with a series of doll like looking filters that changed her eye color and plumped her already manufactured lips

Despite facing immense backlash for flaunting their wealth on extravagant vacations to Lake Tahoe and Turks & Caicos – amid record unemployment and a rampant pandemic – the family has made no real effort to taper back their displays of privilege on social media.

While doing some holiday shopping in Beverly Hills over the weekend, Kylie came face to face with some animal rights activists who slammed her for her continued wearing of fur while she was shopping at upscale store Moncler (which sells fox fur).

The SoCal Animal Defense League led by Rob Banks has made it their mission to swamr her at every cost until she vows to make a change, as famous sister Kim has even sworn off animal fur. 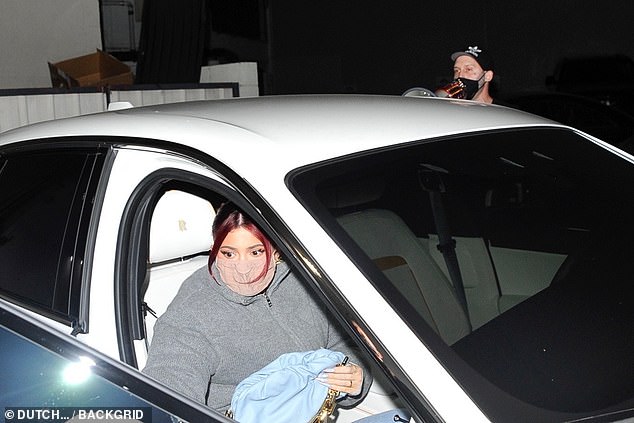 Accountability: The SoCal Animal Defense League paid a very surprise visit to Kylie who was shopping over the weekend in Beverly Hills as the animal rights group swarmed her white Rolls Royce and bombarded her to stop wearing animal fur; pictured December 19

Seemingly just another blip on the somewhat callous youngin’s list of offenses she has pretty much continued to live her unfettered life as plan.

Recently gearing up for Stormi’s birthday who turns three on February 1, Jenner seems to be grappling with her daughter growing up so fast as she posted snaps to social media yesterday and said ‘mommy’s not ok!!!’

Still expertly co-parenting with baby daddy Travis Scott who said he could not wait for the holidays with Stormi, yesterday Stormi accompanied him on a Christmas food and toy drive as Kylie gushed over her thoughtful baby girl. 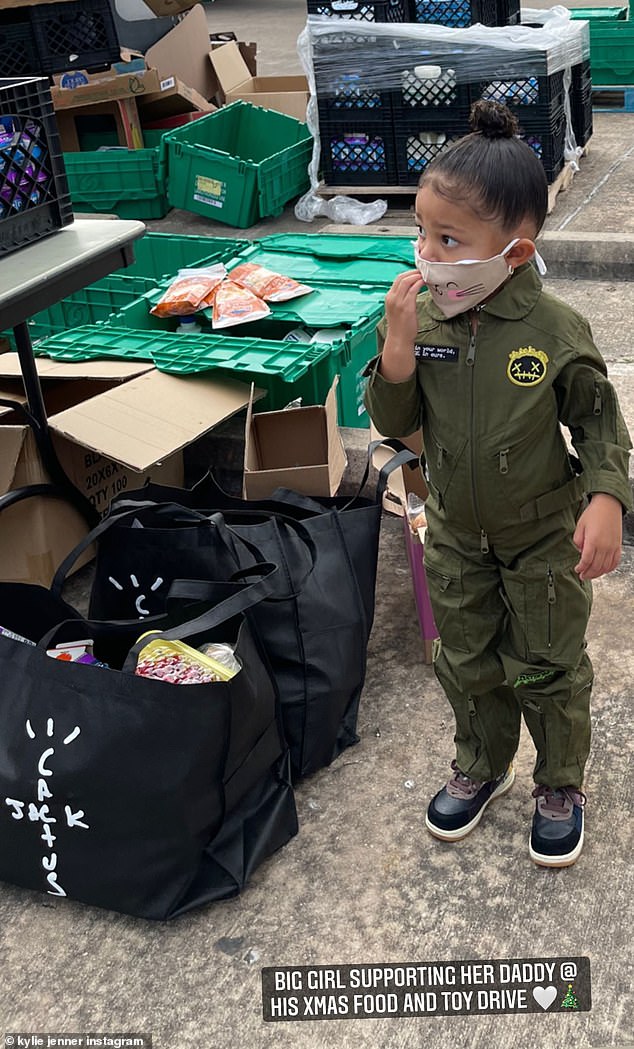 Giving back: Stormi accompanied Travis at his food and toy drive yesterday as the family prepares to spend Christmas together after cancelling the annual Kardashian Christmas party; pictured December 22