Kylie Jenner spent some time at her $12 million Hidden Hills mansion on Friday and showed off new little details that have been added to the property.

The 23-year-old – whose main residence is now a $36.5 million Holmby Hills resort-style estate – shared a glimpse of daughter Stormi’s room and got a little emotional.

Kylie Jenner updated her Instagram stories on Friday with little glimpses of her home in Hidden Hills, Los Angeles

The luxurious spot looked super cozy with satin sheets and an envy-inducing pillow arrangement nestled in a nook.

Above the bed could be seen a little chill-out area with a cushion and books for her little girl to read.

Cut-out clouds made of wood made for a dreamy look as Kylie also revealed some more design details including a neon cloud with bolt of lightning coming from it.

She also revealed a bench with plush toys and some colorful artwork hanging on the wall. 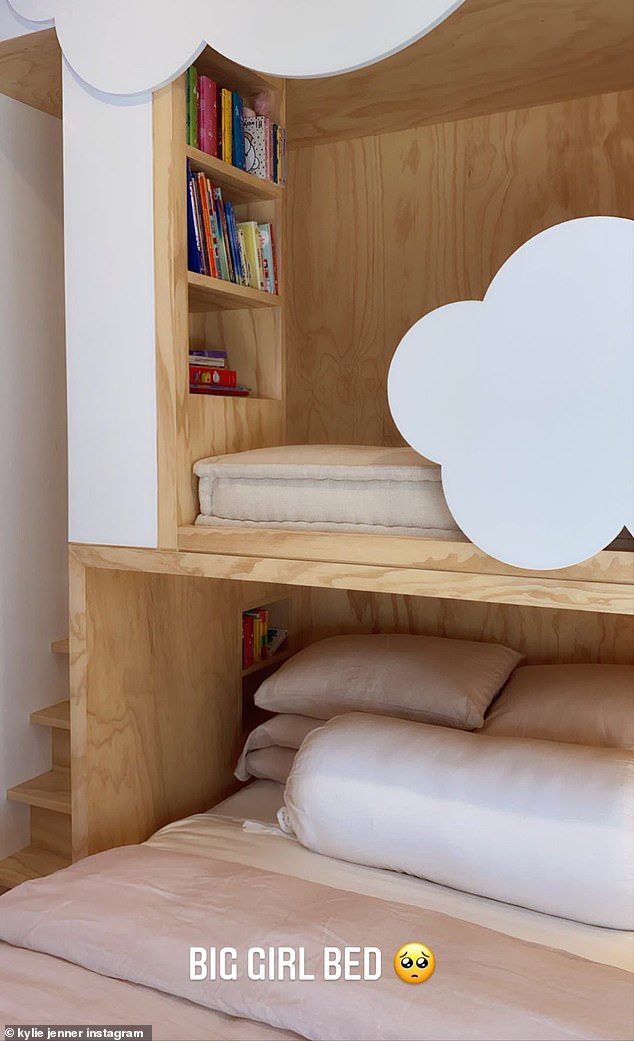 Growing up so fast: Revealing the toddler’s ‘big girl bed’ Kylie captioned the image with a teary-eyed emoji 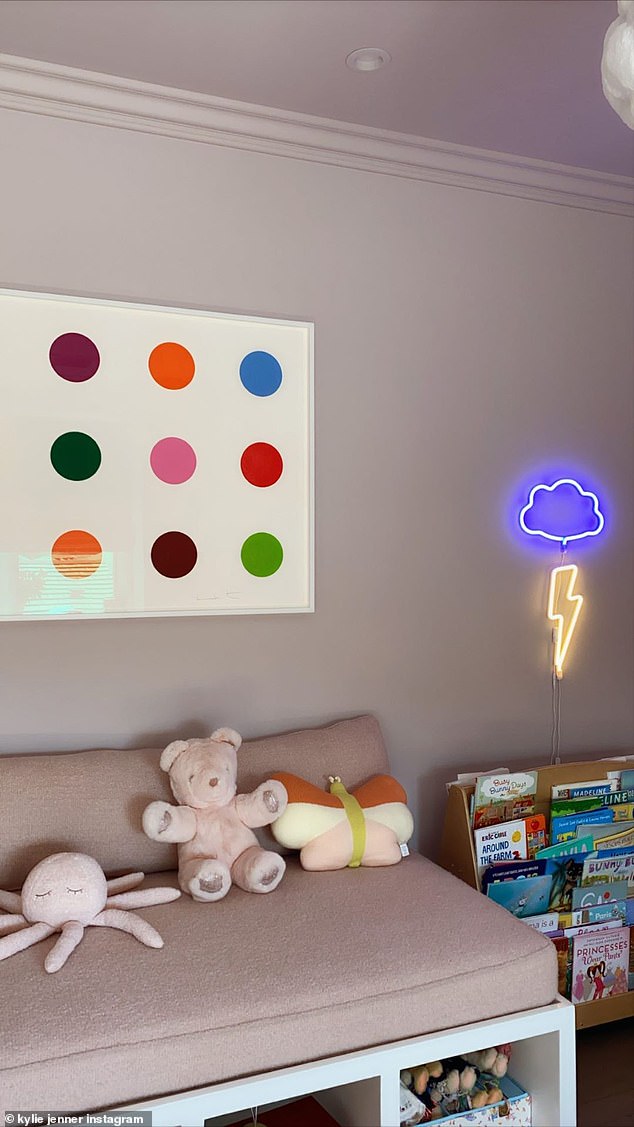 Play room: She also revealed a bench with plush toys and some colorful artwork hanging on the wall

It comes days after Kylie was criticized for giving Stormi a $12,000 Hermes backpack for her first day of school.

Real Housewives of New York alum Bethenny Frankel was one of those most outspoken critics as she wrote on Instagram: ‘I never say anything about this stuff but this is the most transparent humble brag I’ve seen yet. It’s everything wrong with everything.’

However, after receiving some backlash, Bethenny defended her comment on an Us Weekly Instagram post, adding: ‘I’m no stranger to an @Hermes_Paris bag & have a daughter & luxury cars, but flaunting (under the guise of a back to school post) during a pandemic & the greatest unemployment crisis in our lifetime is a choice.’

Shelving: The makeup mogul also showed off some other improvements to the property which is no longer her main residence 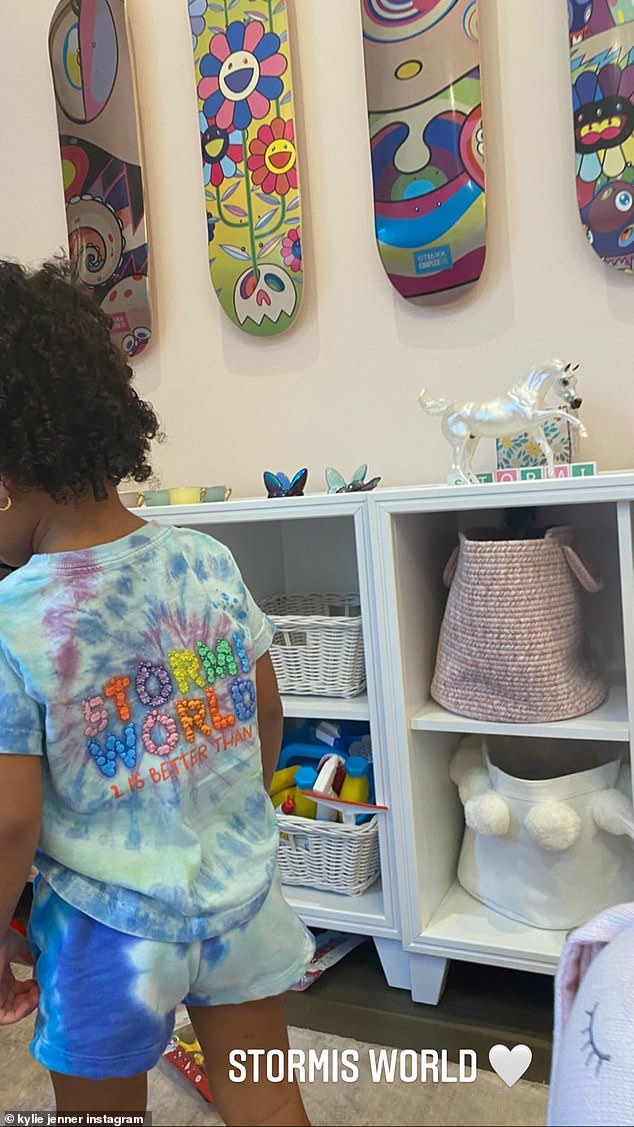 Dream room: The toddler had fun playing with her toys in ‘Stormi’s world’

The Skinnygirl founder was not alone in her feelings on the matter either, as her comment received almost 3,000 likes, as other users quickly chimed in.

‘We are in the middle of a pandemic. Some kids can’t even do distance learning because they are homeless with no computer no WiFi no home! This is disgusting,’ one person wrote.

Another female fan wrote: ‘Sad day when people are struggling with homeschooling their children being out of work or working from home and you are showing off a garage full of expensive cars and an expensive backpack for a child!!!!’

Scenic: Kylie enjoyed a hike near her Hidden Hills property

Adding: ‘There are children starving and families suffering!!! This is horrid! Where is the humbleness? Life isn’t about material things!!!’

Stormi, who Kylie shares with on/off ex Travis Scott, completed her back to school look with Air Jordans and a black dress, and a pair of delicate diamond earrings.

Kylie had captioned the Instagram Story ‘Back to schoooool’ as her daughter began her first day of home schooling at their home in Los Angeles.

Another video of the little one saw her dancing in Kylie’s garage amid her fleet of luxury sports cars, and one fan joked on her post: ‘Stormi wondering which car to choose.’ 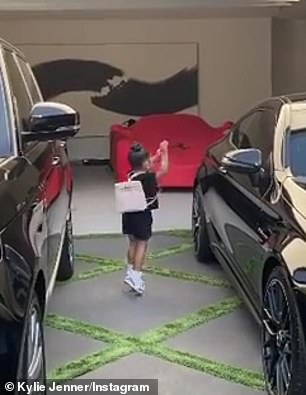 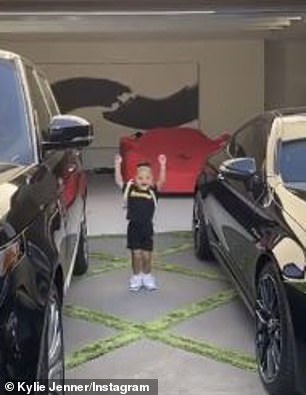 Life of luxury: It comes days after Kylie was criticized for giving Stormi a $12,000 Hermes backpack for her first day of school