She recently shared a selection of snaps of her two-year-old daughter Stormi modelling a tiny blue version of the classic Prada nylon bag.

And Kylie Jenner revealed her little girl has also been treated to a $800 pink version, as she shared a snap of the designer bag on her Instagram Story on Wednesday.

The make-up mogul, 23, posted a picture of her red leather Dior bag beside her daughter’s little pink one, which boasted a small silver chain strap.

‘Mini me’: Kylie Jenner revealed her little girl has also been treated to a $800 pink version, as she shared a snap of the designer bag on her Instagram Story on Wednesday

She simply captioned the fashion snap: ‘mini me [heart].

Kylie regularly shows off her daughter’s designer wardrobe on her Instagram page, and on Wednesday she shared snaps of Stormi wearing a blue Prada bag.

Kylie said she was ‘not ok’ that her daughter, who turns three in February, was growing up so fast as she posted photos of her mini fashionista. 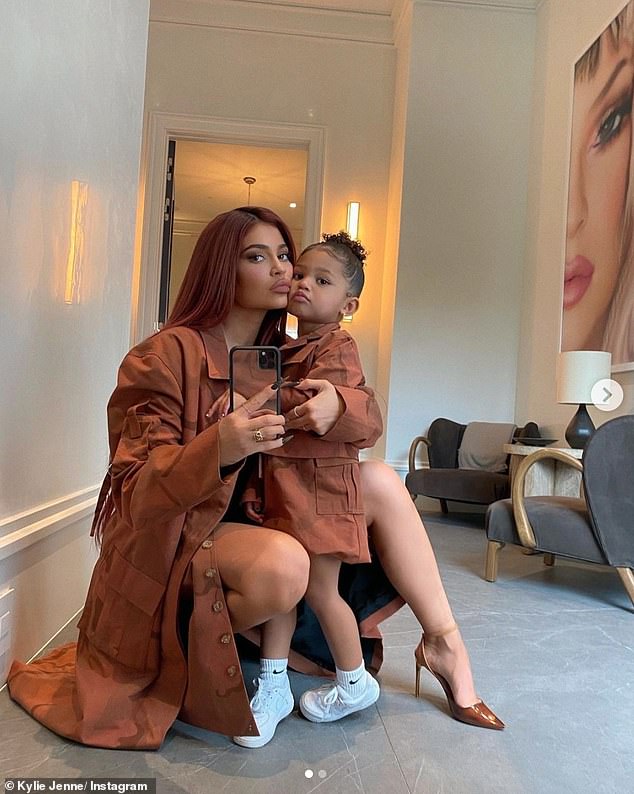 Mommy and daughter: Kylie regularly shows off her daughter’s designer wardrobe on her Instagram page, and on Wednesday she shared snaps of Stormi wearing a blue Prada bag 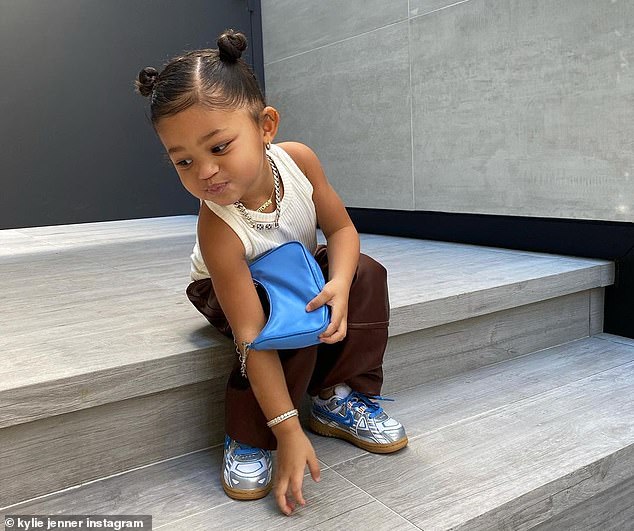 Baby girl: Kylie shared some adorable photos of the fashionable tot flaunting her face and fashion forward style for the camera

Rocking a white knit tank top and a pair of pint-sized brown leather trousers Stormi looked like she was all grown up.

With a pair of eye-catching silver and blue kicks and a blue Prada purse worth $800 to match the only daughter of Kylie and Travis Scott looked as effortlessly cool as her famous parents.

Her hair slicked back into two high buns and an array of custom jewelry to spruce up the outfit, she put on an animated display for the camera.

With the purse draped over her shoulder and a cellphone in hand Stormi looked like a girl on the go. 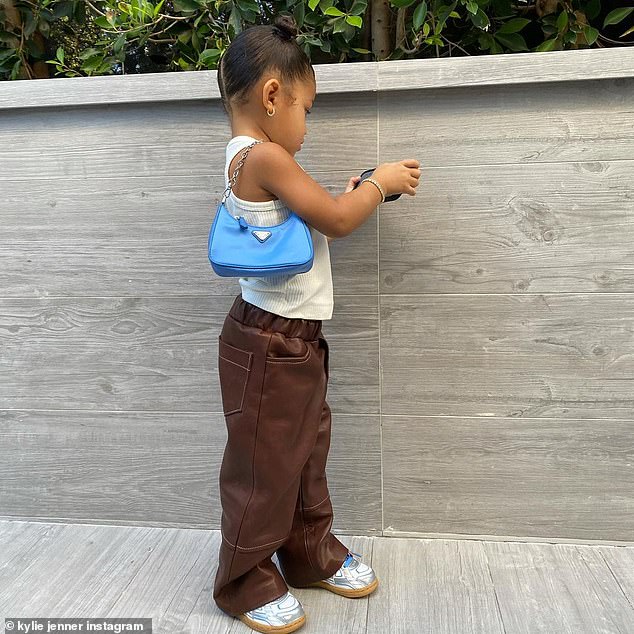 Taking care of business: Stormi played on the phone with the blue Prada purse slung over her shoulder as she looked like a girl on the go 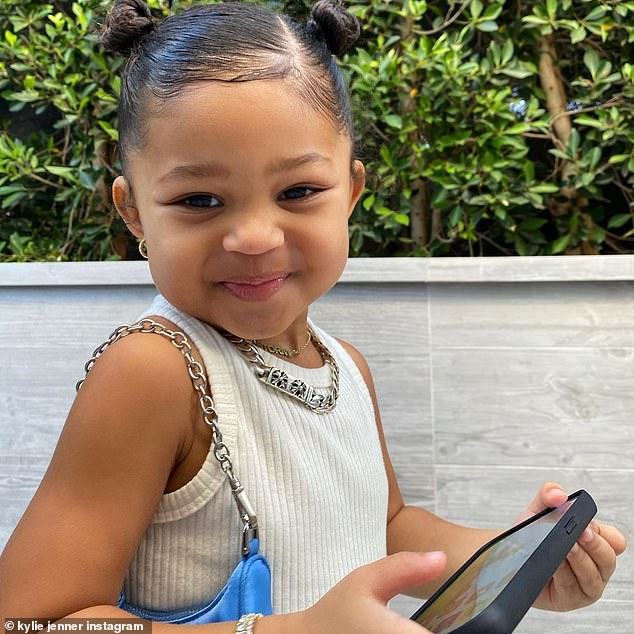 Angelic smile: A close up photo showed Stormi gazing at her mommy as she flashed her sweet smile for the camera

Flashing an angelic smile while angling her body towards the camera she clearly gets her photogenic side from her mama.

She captioned the series, ‘My baby is turning 3 soon and mommy’s not ok!!!!!!,’ with the crying face emoji.

Turning three on February 1, Jenner is known to go all out when it comes to her daughter’s birthday.

Last year they hosted the second annual ‘StormiWorld’ where guests were treated to an over the top display inspired by Scott’s Astroworld as they entered the party through an inflatable version of Stormi’s head. 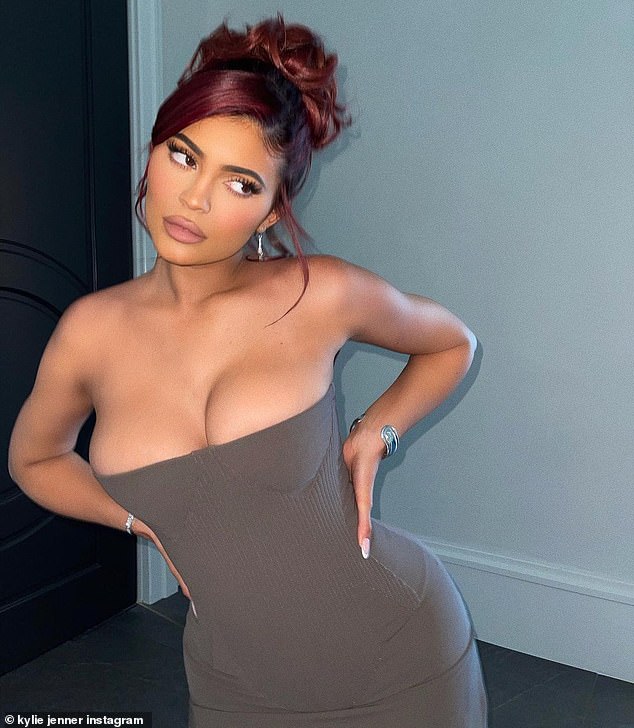 ‘Not ok’: With her only daughter growing up so fast before her very eyes Jenner said ‘mommy’s not ok!!!!!!,’ ahead of her third birthday on February 1 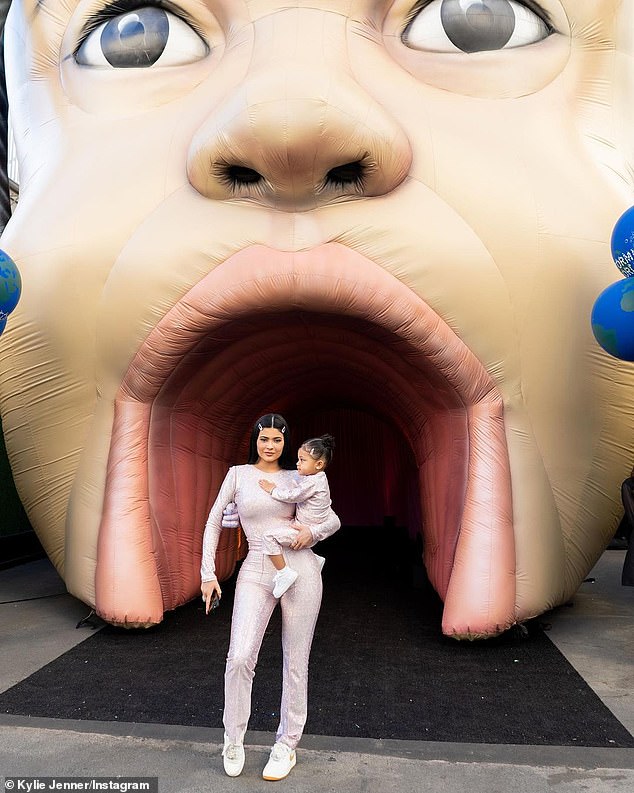 Mini-me: At the second annual StormiWorld party, Jenner went all out as guests entered the party through an inflatable version of Stormi’s head; February 2

The extravagant party featured themed dimensions inspired by Stormi’s love of Trolls and Frozen as well as carnival rides and a wide array of food and drinks for adults and children alike.

Despite a pandemic which has caused them to cancel their upcoming Christmas Eve party, the family has largely pushed the envelope when it comes to celebrating special occasions over the past few months.

Seemingly already gearing up for Stormi’s next birthday, Jenner will nonetheless make it a special occasion even if on a smaller scale due to the COVID-19 virus.

Though she and Scott are currently not romantically involved the two have spent a large portion of quarantine together and have celebrated virtually every holiday together as a family. 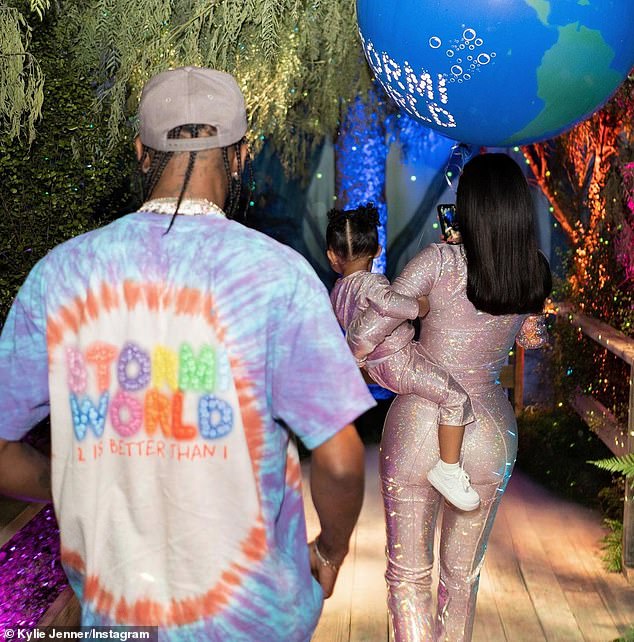 Support system: Despite being platonically involved with baby daddy Travis, Kylie said they are ‘connected and coordinated,’ when it comes to co-parenting; December 21

In a February 2020 interview with Harper’s Bazaar, Kylie said she and her baby daddy will always make sure their daughter is taken care of.

‘We’re like best friends. We both love Stormi and want what’s best for her. We stay connected and coordinated. I think about [my parents] in situations with Stormi, what they would do. They were very hands-on with me, and I want the same for Stormi.’

A natural born starlette who loves the spotlight just like her mom Jenner said being photographed just comes with the territory and Stormi seems to be acclimating accordingly.

‘I’m just trying my best, even though she’s still little, to remind her how blessed we are and that this isn’t normal, the way we live. It’s just our life. People want to take pictures. I think she would feel differently if I was always covering her face like, “Don’t look!”‘