Fans Throw 'Sh*t' At Lil Duvall – He Gets Booed Off Stage!! (Video)


He launched his own Astroworld festival in 2018 to highlight the best in contemporary hip hop.

Now Travis Scott will be headlining the Coachella Valley Music and Arts Festival in Indio, California, one of the biggest and most prestigious musical gatherings in the world, according to Us Weekly.

The 27-year-old former partner to Kylie Jenner, 22, is expected to top the bill with singer Frank Ocean and a reunited Rage Against the Machine. 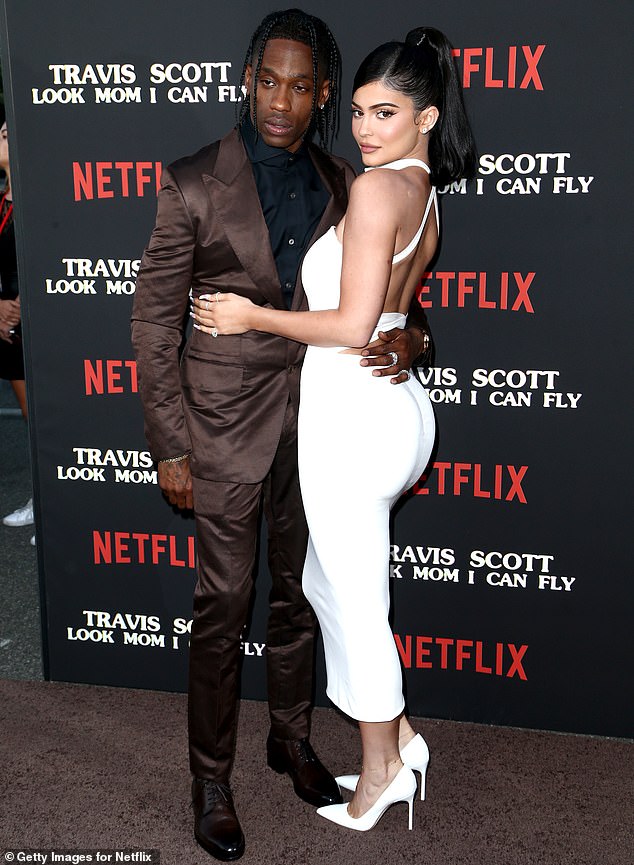 On the marquee: Kylie Jenner’s ex partner Travis Scott, 27, was revealed to be one of the headliners for the Coachella Music Festival in April, along with Frank Ocean and Rage Against the Machine, according to Us Weekly; shown in August

Coachella takes place over two back-to-back weekends, April 10–12 and 17–19, with the same set of musicians, though they might play different each weekend.

Travis last took to the stage at Coachella in 2017, a year before releasing his breakthrough album Astroworld.

That performance also marked another milestone: the debut of his relationship with Keeping Up With The Kardashians star Kylie Jenner.

The celebrity couple ended their two-year relationship in October, though they’ve remained committed co-parents to their one-year-old daughter Stormi Webster since then. 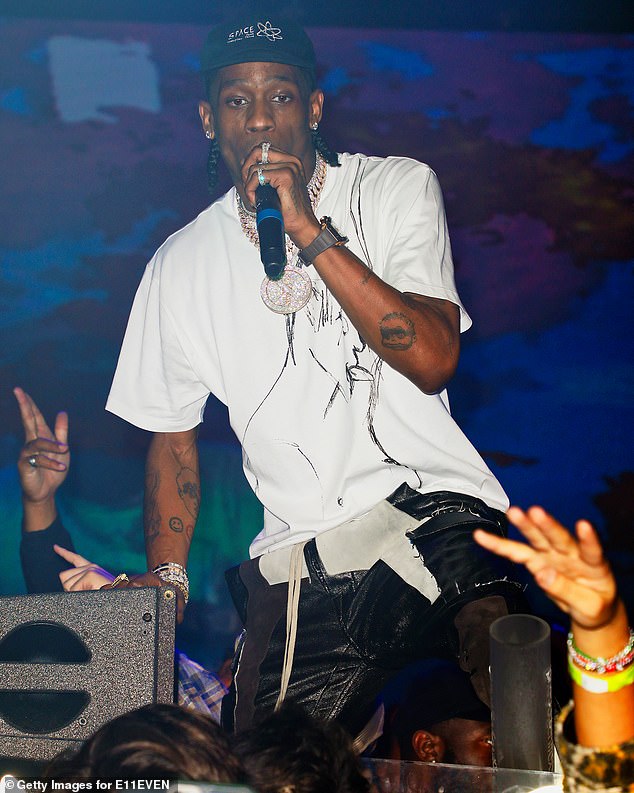 New love: Travis last played at Coachella in 2017, when he debuted his relationship with Kylie; pictured December 6 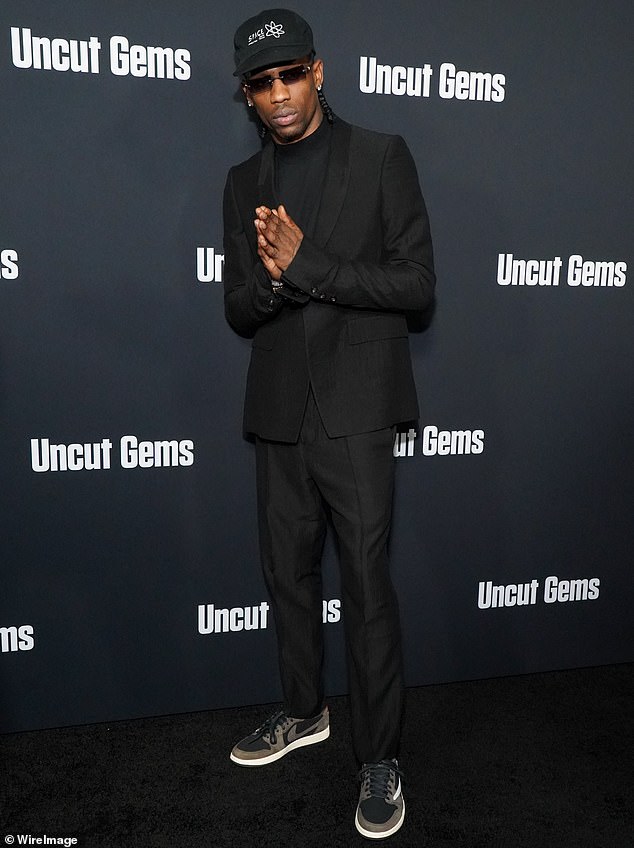 It’s over: The rapper and the reality star reportedly broke up in October, though they’ve remained close friends; shown December 11

At the time of their 2017 Coachella sighting, People reported that it might have been part of ploy to make her ex-boyfriend Tyga jealous ‘by hanging out with other guys.’

The two quickly became inseparable, and Travis posted, ‘Legit happiest day of my life,’ in June, which fans later interpreted as the moment he learned that Kylie was pregnant with Stormi.

They welcomed their daughter on February 1, after staying largely silent about the pregnancy.

Though things were initially positive after the birth of their daughter, the following year was marred by rumors of Travis’ cheating, and the couple called it quits in October.

They were the subject of engagement rumors recently after Kylie was spotted wearing a large diamond ring. 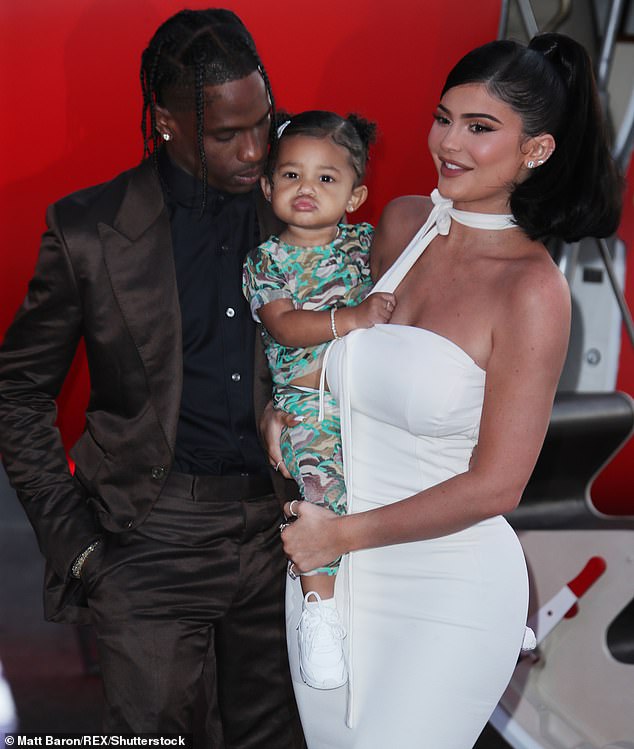 Happy family: Travis and Kylie share a one-year-old Daughter Stormi, and they’ve been committed co-parents to her; picture in August 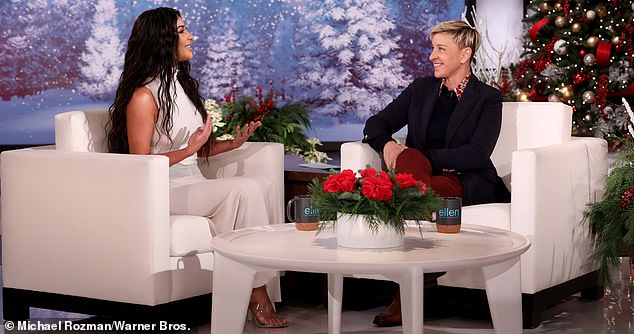 Nope: Fans thought Kylie might have gotten engaged to Travis when she sported a diamond ring, but Kim Kardashian told Ellen DeGeneres they were just ‘close friends’ on Tuesday

But her older sister Kim Kardashian poured cold water on that proposition during a Tuesday appearance on The Ellen DeGeneres Show.

‘The big ring, definitely they’re not engaged,’ she said. ‘And I think she’s wearing it on a different finger. I do know that she — I think she bought that herself…’

‘I honestly don’t know, but I think that they are just really close friends and co-parenting amazingly, I don’t know the status if they’re together or not. I don’t think they are,’ she added. 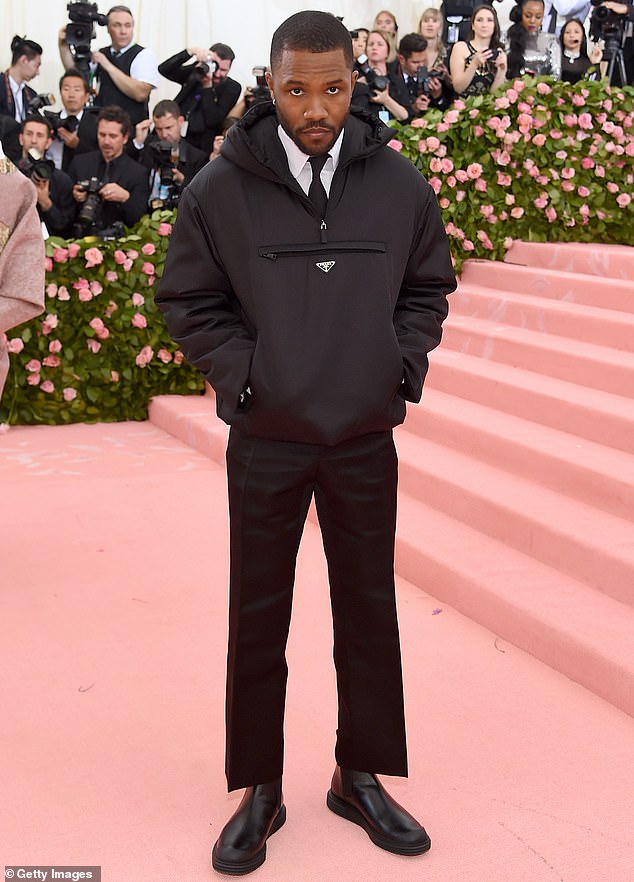 Old pals: Frank Ocean will also headline the festival. He and Travis disagreed last year over his vocals on Astroworld and politics, though they found common ground; pictured in May

In addition to Travis, R&B singer Frank Ocean will reportedly headline one of the weekend dates.

He previously played the desert festival in 2011 as part of the rap collective Odd Future, as well as solo in 2012 to lead in to his hit album Channel Orange.

Frank has a bit of history with Travis, who previously rapped on a version of his single Lens in 2017.

In 2018, the singer made an uncredited appearance on the Astroworld track Carousel. He later filed a cease and desist against Scott to have the vocals removed, which were reportedly processed with autotune and pitch shifted in ways he didn’t approve of, according to The Fader.

Ocean later claimed his disagreements weren’t musical at all, but rather over social issues, though he revealed in September 18 that the two had resolved their differences amicably.

‘I THINK THE SONG SOUNDS COOL, I DID IT IN LIKE 20 MINUTES AND THE MIX SOUNDS THE WAY TRAVIS WANTED IT TO SOUND FOR HIS RECORD,’ he wrote on Tumblr.

Travis subsequently shared a photo of Frank Ocean merchandise he owned and saluted his collaborator in the caption.

‘Someone I call family and always will. Has taught me a ton. And a true inspiration…’ he captioned the image. 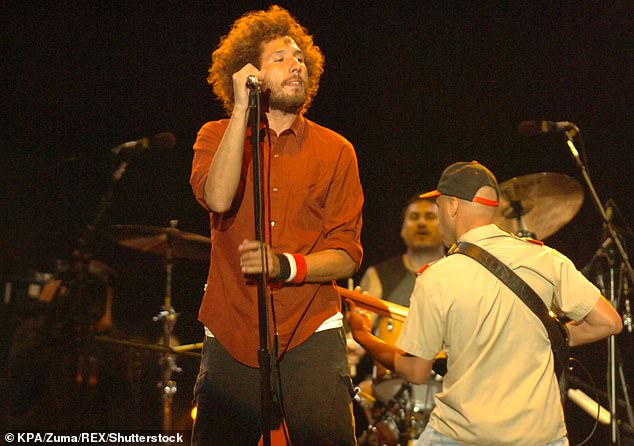 Rocking out: The politically active rock group Rage Against the Machine will reunite to play the festival; pictured in 2007 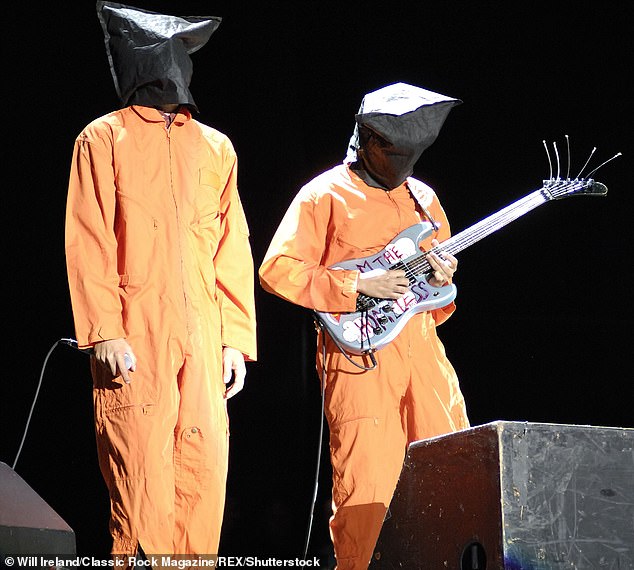 The politically outspoken Rage Against the Machine will round out the headliner spots.

They’re Coachella royalty, having performed at the festival’s first installment in 1999.

Rage reunited in 2007 and again played Coachella that year. They continued playing live before taking another hiatus in 2011, though they haven’t released a new studio album since 2000’s Renegades.

The band announced their reunion in November of this year and confirmed they would be playing Coachella after announcing dates in Indio during the festival.