Rochelle Humes’ sister Sophie led the girls into the villa in the first look pictures from Sunday’s night upcoming launch show of the winter series of Love Island.

However, noticeably missing from the lineup are rumoured ‘bombshell’ twins Jess and Eve Gale, which has fuelled further rumours they could make a surprise entrance at the end of the show.

Sophie, 21, looks stunning in a black bikini with white piping along the top as she joined the first five girls heading into the stunning South African villa.

Making her entrance: Rochelle Humes’ sister Sophie leads the girls into the villa in the first look of the eagerly anticipated winter Love Island, which is set to return on Sunday night

The beauty, wears her long raven tresses loose as she strutted her stuff into the villa of dreams for the start of her journey to hopefully finding love.

Next is Shaughna Phillips, 25, who opts for a yellow and pink bikini to make her debut as she prepares to find love in the villa.

Serving some vintage vibes, the blonde bombshell ties a sarong around her hips as she arrives looking for love. 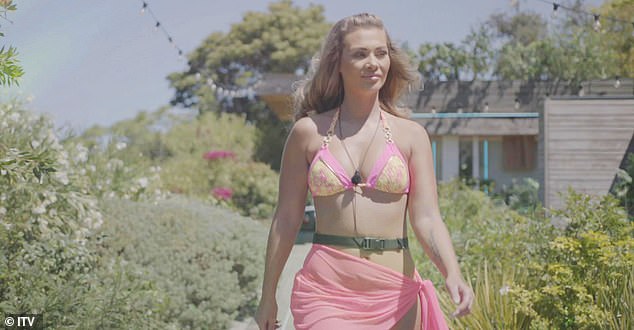 Vintage vibes: Next is Shaughna Phillips, 25, who opts for a yellow and pink bikini to make her debut in the brand new £5.3 million villa in South Africa 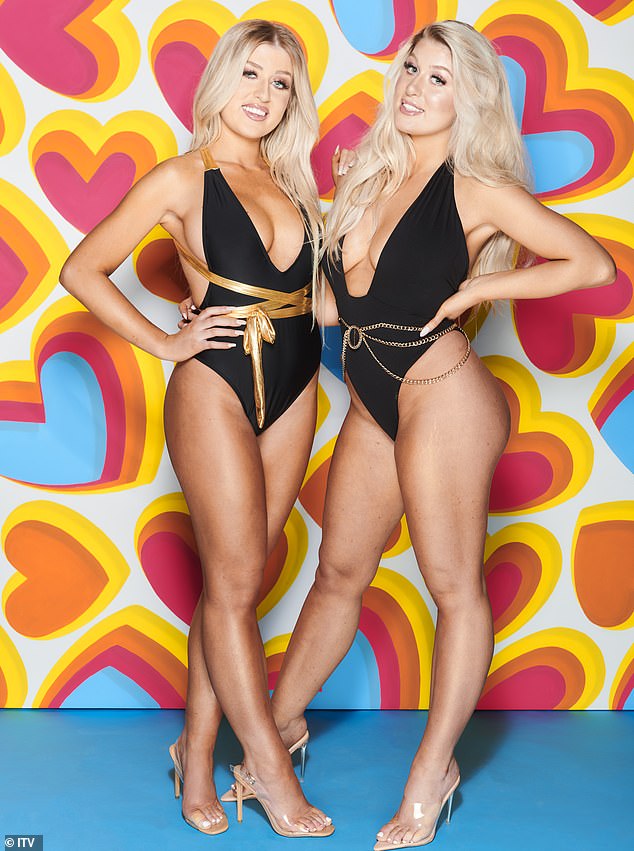 Twin thing: However, noticeably missing from the lineup are ‘bombshell’ twins Jess and Eve Gale, 20, hinting that perhaps they could enter later in the show

Leanne Amaning, 22, ups the glamour ante with a studded shawl over her red bikini. She leaves her sleek raven tresses loose cascading down her torso.

Once inside the ladies meet Paige Turley, also 22, who is the ex-girlfriend of Lewis Capaldi and Siânnise Fudge, 25, who opts for a sexy one piece costume.

They gather around the famous fire pit before new host Laura Whitmore drops in to greet the ladies.

Looking sensational in an embroidered yellow and white jumpsuit, the blonde beauty elongates her lithe legs in a pair of killer wedges.

Gorgeous gal: Leanne Amaning, 22, ups the glamour ante with a studded shawl over her red bikini. She leaves her sleek raven tresses loose 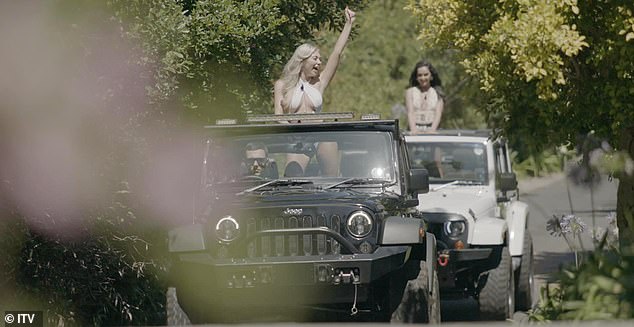 Woo hoo: The ladies enter in their usual fashion – riding on top of open jeeps with their arms in the air, ready to meet the first male Islanders

First meet: Once inside the ladies meet Paige Turley, the ex-girlfriend of Lewis Capaldi, and Siânnise Fudge, 25, who opted for a sexy one piece costume

Famous fire-pit: They gather around the famous fire pit before new host Laura Whitmore drops in to introduce them to the men

After gathering round the fire pit, the ladies line up in formation – ready to meet the guys.

However the mysterious missing twins means fans can probably expect a surprise at the end of Sunday night’s show.

Last year, boxer Tommy Fury and dancer Curtis Pritchard set hearts racing when they surprised the villa at the end of the first episode after the girls had already coupled up.

And after the twins were absent from a recent photo shoot showing the full cast of ladies by the pool, some eagle eyed viewers took to Twitter to speculate they may be making a late entrance. 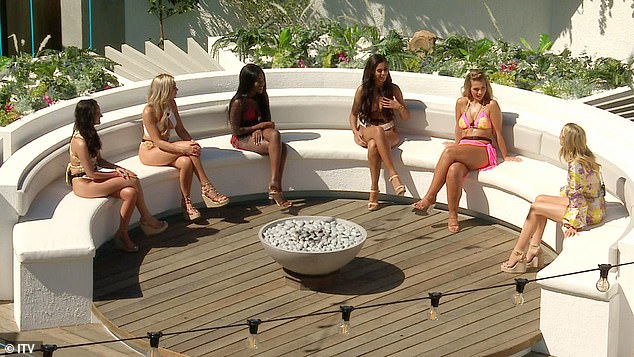 Secrets revealed: The gorgeous line up of ladies all opt for wedges with their bikinis, no doubt all hiding their nerves as they prepare to meet the guys 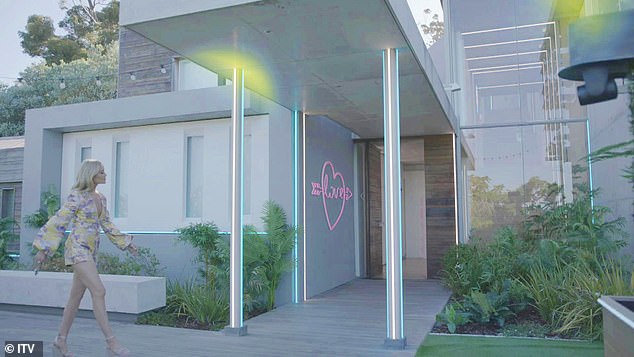 There she goes: Looking sensational in an embroidered yellow and white jumpsuit, Laura  elongates her lithe legs in a pair of killer wedges 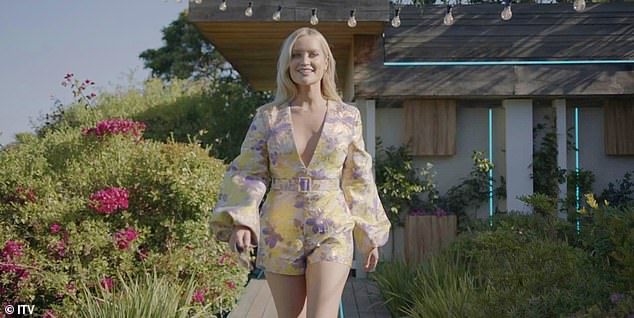 Making her entrance:  She hilariously reveals that she had been practising her slow motion walk earlier on Saturday 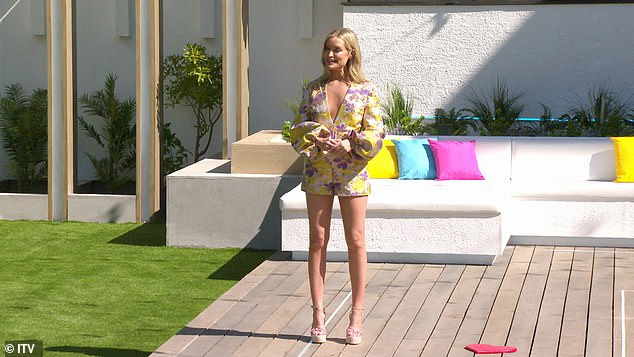 Sexy lady: The presenter looks sensational as she met the ladies then prepared to introduce them to the guys 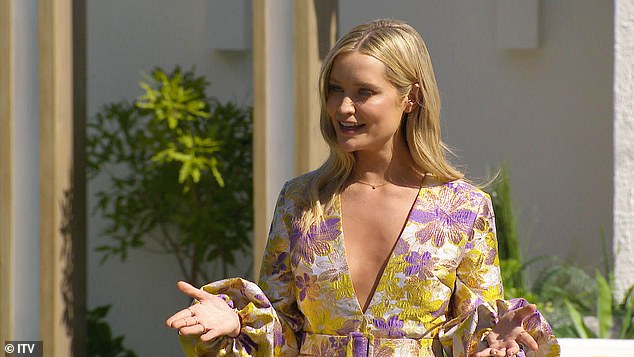 Summer of love: She is already sporting a glowing tan as she has been in South Africa preparing for the show to start

One fan wrote: ‘I just can’t wait for the drama on Sundays Love Island. Also, why do I feel like the twins are going to be added in later just so they can say something along the lines of ”oh oh here comes double trouble” followed by a slow mo of them entering the villa?’

Another added: ‘If you notice there are more girls than boys so I think the twins will come in at the end of episode one just like how Tommy and Curtis did last season.’

One fan predicted: ‘Imagine if the @LoveIsland producers sent the twins in as bombshells without revealing them. THE SCENES #loveisland’.

Here we go: The ladies line up in formation as the prepare to meet the guys who are also looking for love