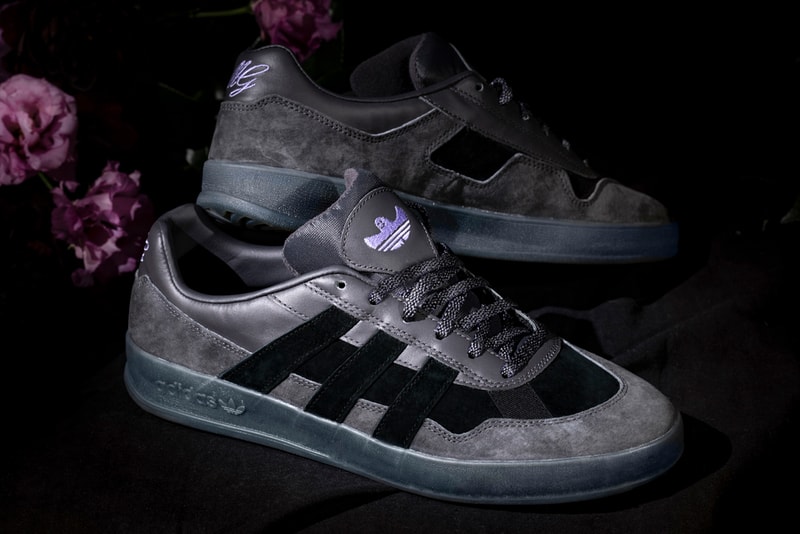 Influential skateboarder/artist Mark Gonzales and adidas Skateboarding have presented a new black, gray and purple colorway of the Aloha Super. Inspired by the custom-dyed fencing suit Gonzales wore during a 2018 re-creation of his historic 1998 Städtisches Museum performance, the design is equal parts skate and art — much like the interpretive piece it was inspired by. Uppers are constructed of premium materials. Black suede appears around the midfoot and toebox as well as on the sizable Three Stripe graphic. Grey suede takes its place on the mudguard and heel, with grey full-grain leather appearing on the collar, eyestays and tongue. Punchy purple accents are present on both the tongue badge and heel — the former of which features Gonz and adidas‘s hybrid Shmoofoil graphic, the latter his embroidered initials.

Sturdy nylon laces provide a snug fit, and a molded adiPRENE sockliner ensures excellent impact absorption. The semi-translucent grey midsole/outsole is constructed of a sticky rubber for maximum board feel and features embossed adidas graphics on the lateral heel.

The Mark Gonzales x adidas Skateboarding Aloha Super “Black/Gray/Purple” will release on the adidas webstore February 22, and retail for $90 USD.