The  25-year-old hitmaker took to Instagram to share a snap of herself trying on a sample of a ripped pair of blue jeans she was sent to test out for the range, which she teased is ‘coming soon’.

She captioned the post with ‘Nothing REAL can be threatened,’ appearing to shade Tory Lanez, who shamelessly used the shooting drama to unveil his new album Daystar on Thursday.

Strike a pose: Megan Thee Stallion has joined forces with Fashion Nova to create a denim line for tall women. The 25-year-old hitmaker took to Instagram to share a snap of herself trying on a sample of a ripped pair of blue jeans she was sent to test out for the range, which she teased is ‘coming soon’

Adding: ‘Oh yeah and remember when I said I was collaborating with @fashionnova to make jeans for tall women. These are the first samples coming soon.’

There’s no official word on when the line will be released.

The rapper is making a name for herself in the fashion industry, having already starred in Coach’s Spring 2021 campaign, as well as the designer label’s holiday launch last year, alongside the likes of Yara Shahidi, Fernanda Ly, Kate Moss and Miles Heizer.

The caption of Megan’s Instagram post seemingly shaded Tory Lanez; he had shamelessly used the drama surrounding the shocking shooting to hype up the release of his new album Daystar.

‘There is a time to stay silent . And a time to speak ….. I said all I could say on this … ALL PLATFORMS … ….. #DAYSTAR … I’ll be back to y’all soon …. respectfully …..’ wrote Tory, 28, who released the album on all streaming platforms Thursday night. 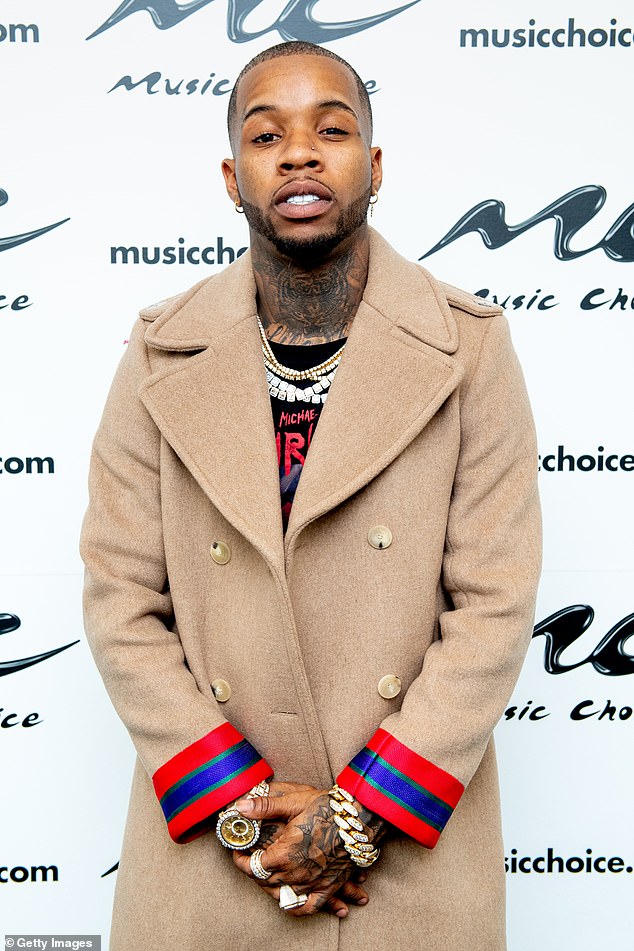 Drama: She captioned the post: ‘Nothing REAL can be threatened,’ appearing to shade Tory Lanez, who shamelessly used the shooting drama to unveil his new album Daystar; pictured December 13, 2018 in NYC 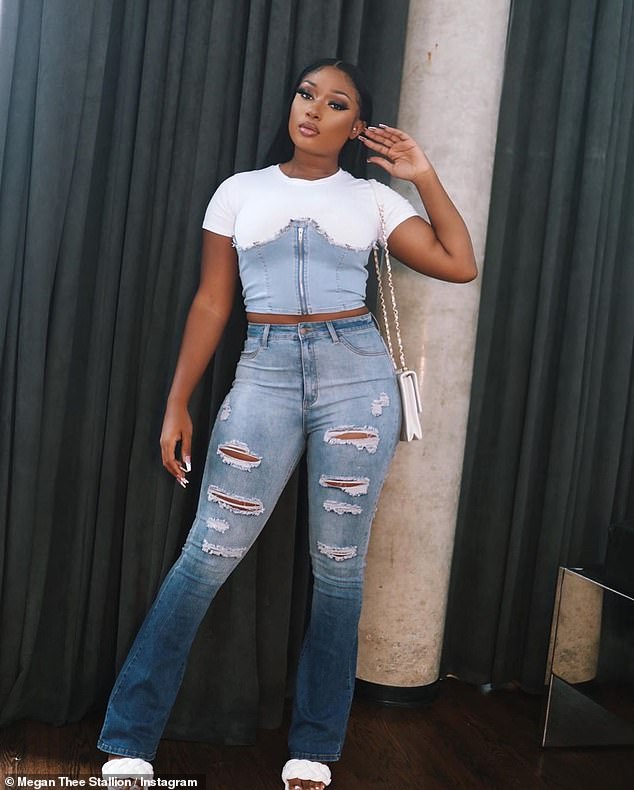 Vibes: Adding: ‘Oh yeah and remember when I said I was collaborating with @fashionnova to make jeans for tall women. These are the first samples coming soon. (sic)’

Looking amazing: There’s no official word on when the line will be released

Lanez was reportedly arrested and charged with a felony count of carrying a concealed weapon in a vehicle, according to TMZ at the time.

‘How the f**k you get shot in your foot but don’t hit no bones or tendons?’ raps Lanez at one point, as he appears to question the validity of Megan’s injuries.

He then went on to claim that he was ‘framed’ for the shooting as he raps: ‘Megan’s people trynna frame me for a shooting, but them boys ain’t cleanin’ up.’

Tory then directly calls out Megan for a statement she issued to Instagram on July 15, where revealed that ‘a crime was committed against [her] and done with the intention to harm [her].’

He continues: ‘I know I ain’t do it, but they people in your ear, they’re the ones that I fear / Do you think Tory Lanez would do you in for real?’

In a series of more emotionally-charged lyrics, Lanez begs Megan to ‘look at how [she] doing [him]’ as he seems to suggest they were linked romantically.

The first thirty-seconds of the album’s premiere song Money Over Fallouts features a compilation of audio clips taken directly from news reports regarding the July 12 shooting where Megan was allegedly shot twice in the foot by Lanez.

Tory, maintaining his innocence, offers to ‘renegotiate the unity’ with Megan, despite lambasting her actions and claiming her allegations are fabricated. 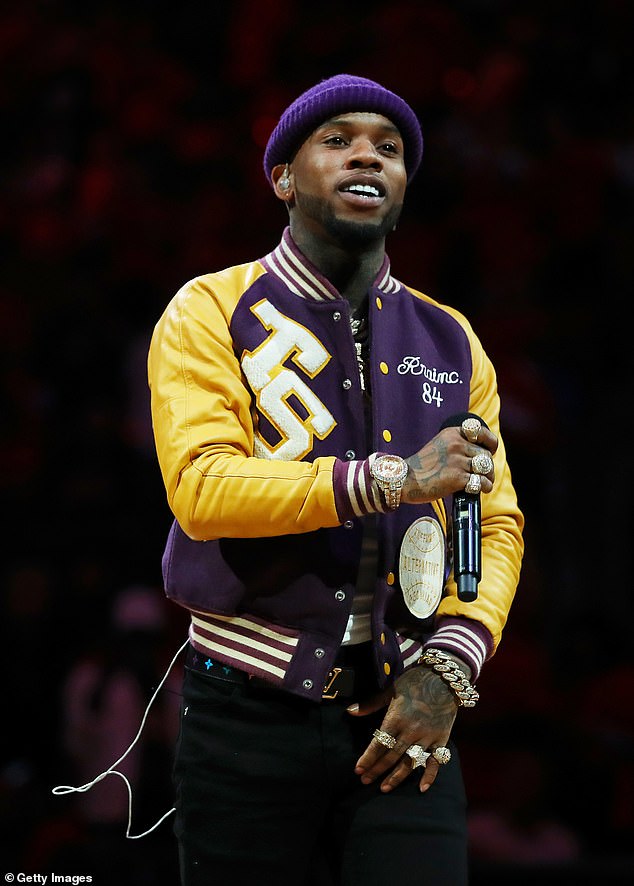 Abruptly flipping the script, Tory poses the question: ‘How the f**k your team is trynna play me as some whole menace?’

Upon the song’s close, Lanez claimed that all of the negative press from the shooting made him lose out on ‘$10million.’

In another song on Daystar titled Friends Become Strangers, Tory references to a string of text messages between him and Megan that were leaked to TMZ earlier this month.

We both know what happened that night and what I did,’ he raps at one point.

Earlier in the day, Lanez, who had never spoken publicly about the shooting, alluded to the incident in a tweet where he apologized ‘for [his] silence’ on the matter and encouraged fans to return to his social media platforms at ‘9PM PST’ for further explanation.

After his album’s release, Megan’s attorneys hit back at Tory, accusing him of launching a smear campaign against her, after she publicly named him as her shooter last month.

They appear to be accusing his team sending false emails, some of which allegedly included doctored text messages, to the press.

Her attorney Alex Spiro told Page Six: ‘We have been made aware of manipulated text messages and invented email accounts that have been disseminated to the media in a calculated attempt to peddle a false narrative about the events that occurred on July the 12th. A smear campaign can’t change the truth.’

Lanez’s reps responded with: ‘The only commentary which has been made on this topic was the creative output on the album. We are investigating who could be sending these false emails and intend to take action against them.’

Lanez’s tasteless album announcement on Thursday comes less than a month after TMZ published a series of apologetic messages allegedly made by him to Megan regarding the incident.

While the Canadian rapper never specifically mentioned the shooting or a gun, he acknowledged Megan would probably ‘never’ speak to him again.

‘I genuinely want u to know I’m sorry from the bottom of my heart,’ the performer wrote to her after the July incident, according to the outlet. ‘I was just too drunk.’

He continued: ‘None the less sh*t should have never happened and I can’t change what did. I just feel horrible.’

The outlet also reported the Houston-based star has not responded to his texts.

A source also confirmed the messages were real to Page Six, which were in reference to her claims Lanez shot her twice in the foot.

In August, she named him as her assailant on an Instagram Live, where she told him to stop ‘lying’ and defended her decision not to tell the cops, at the scene, what happened. 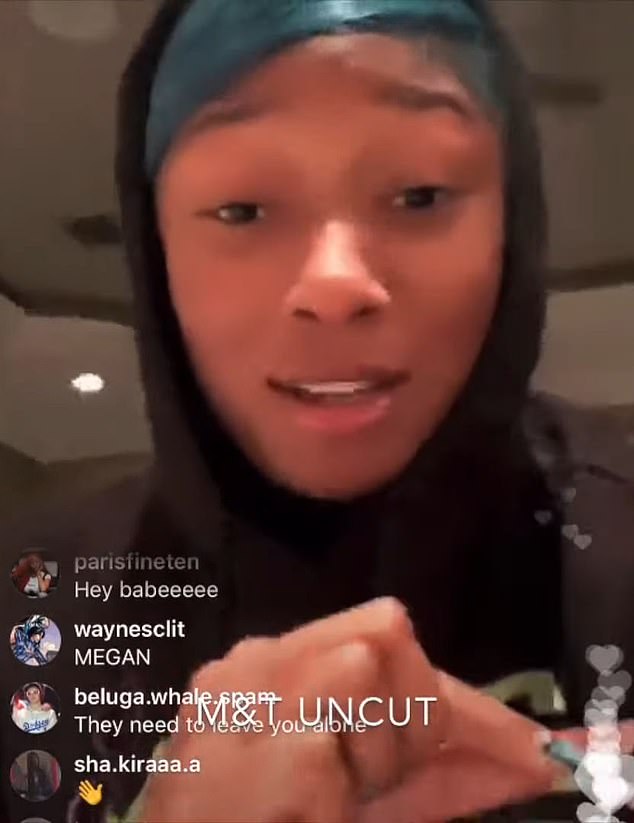 Her side: In an Instagram Live in August, Megan Thee Stallion claimed Canadian rapper Tory Lanez shot her in the foot on July 12 after they had an argument and she tried to leave the ca

The rap star said she thought cops would kill them if they learned there was a gun in the car and claims she made an attempt to ‘spare’ Lanez by holding back the truth.

Yet, Meg said she was now ‘tired’ of the rumors being spread by Lanez’ team, telling her followers ‘stop acting like black women is the m***********g problem.’

Her Instagram Story, which occurred more than a month later, was the first time she directly used Lanez’ name to accuse him of being the shooter.

‘You shot me and you got got your publicist and your people going to these blogs lying and s**t. Stop lying. Why lie.’

She then blasted some of the rumors circulating that she had hit him before she was shot, claiming that there was a witness who saw how she got out of the car and was walking away when Lanez, whose real name is Daystar Peterson, allegedly began shooting at her from the back seat.

She also hit out at claims that it happened at Kylie Jenner’s house, where the pair had been partying earlier that evening, saying that they were five minutes from where she was staying when she decided she had enough of an argument and tried to leave the vehicle. 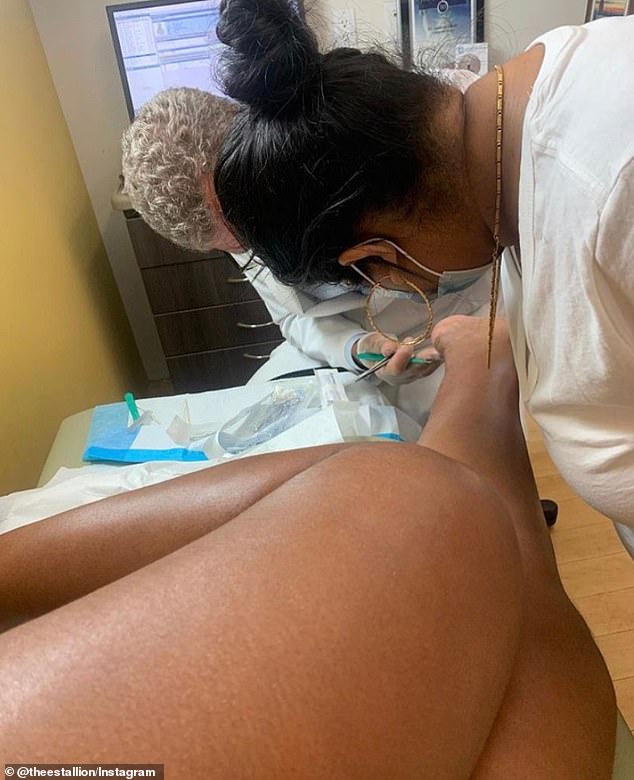 Painful: She hit back at those that said she is lying but still did not name Lanez as she showed the stitches being taken out of her injuries. The rapper said she is ‘tired’ of the lies

‘I get out, I’m walking away and this n**** from out the backseat of the car starts shooting me. You shot me. I didn’t get cut by no glass but I’ll tell you why they’re saying that.’

The WAP rapper then explained why she hadn’t told the cops that Lanez shot her even when she was taken to the hospital, saying it was because she ‘didn’t want to die.’

‘I didn’t want the police to shoot me because there’s a gun in the car.’

She said that the three others who were in the car with her – her friend, Lanez and his security guard – were taken to jail, but she went to the hospital.

‘You want me to be a bad person so bad, y’all want to believe the lie before you believe the truth,’ she added. 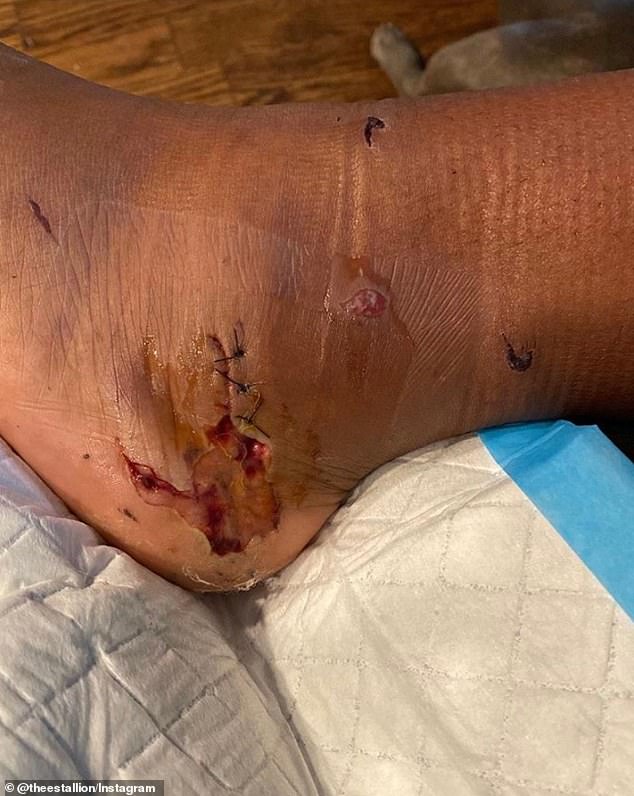 Graphic: Megan Thee Stallion posted pictures of her injuries to Instagram on Wenesday

She then accused Lanez of being scared to tell people that he shot her and so had his team spreading lies.

‘Truth is you shot me. You’re scared to tell people you shot me and you got your whole team on the internet lying trying to cover your a**.

‘And I’m tired of it. Stop doing that, stop dragging me.

TMZ had previously reported that Lanez shot Megan Thee Stallion in the foot twice after an argument on July 12 in which she and her friend attempted to get out of the SUV they were all traveling in.

The group left together from a house party in the Hollywood Hills in the early hours of the morning, but Megan and her friend Kelsey Nicole at some point wanted to leave the chauffeur-driven car. 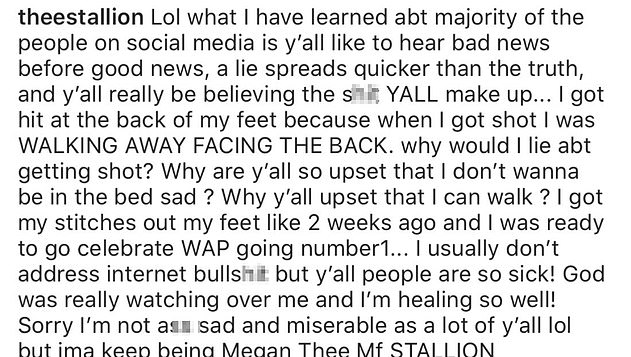 In the video, police are seen ordering the music sensation to get out of an SUV with her friend and fellow rapper Tory.

As she makes her way along the concrete with her hands in the air, blood is seen coming from her feet. Tory was seen lying on the road near the side of the vehicle with his hands in the air.

Tory was arrested on a concealed weapons charge as he was found with a handgun under his seat and is currently out on bond after posting a $35,000 bail. He is scheduled to appear in court in October.

At the time of her Instagram Live, Billboard revealed that the Los Angeles District Attorney’s office was still considering whether to file charges against Lanez.

LAPD spokesperson Richardo Santiago said they had asked law enforcement to provide a further investigation before they decide if a felony assault with a semiautomatic firearm charges will be brought against him.

Megan has been extremely vocal when speaking out against those who have promoted false rumors about what happened when she was shot after leaving the Hollywood Hills party.

‘Why are y’all so upset that I don’t wanna be in the bed sad? Why y’all upset that I can walk? I got my stitches out my feet like 2 weeks ago and I was ready to go celebrate WAP going number 1.’ 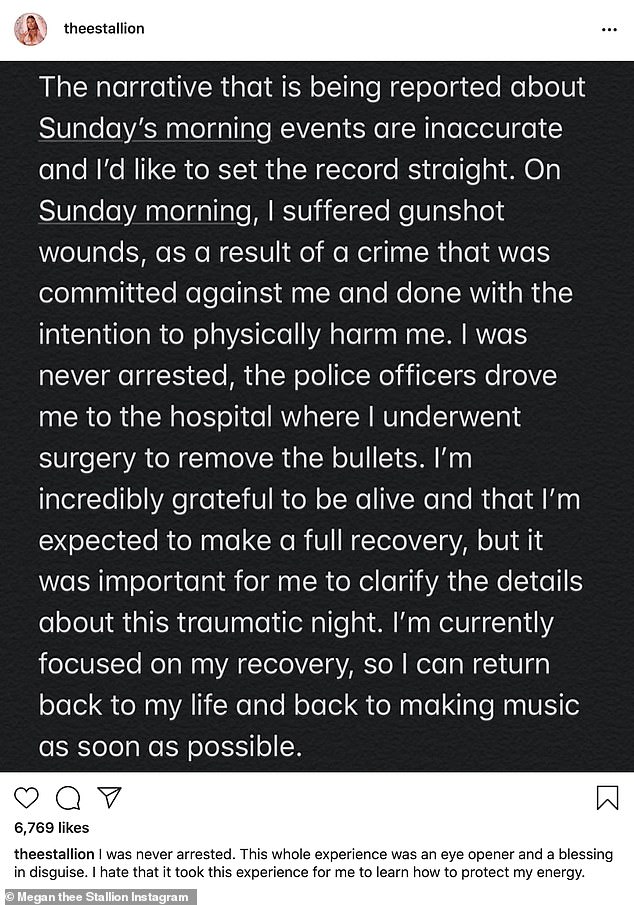 Setting the record straight: In July, Megan took to her Instagram account a few days after the incident to tell her side of the story and claimed that she was deliberately shot