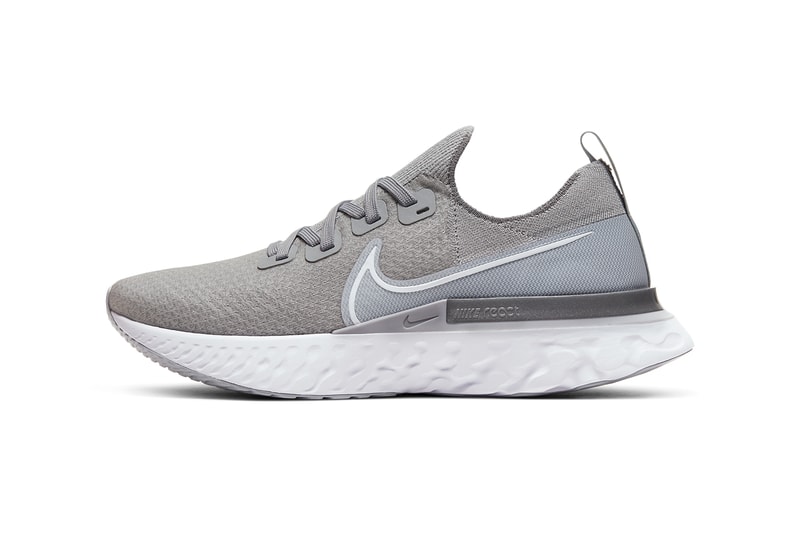 Nike‘s new React Infinity Run is an ultra-cushioned shoe designed to reduce injuries, and after making its retail debut earlier this month, it now appears in two timeless colorways: “Wolf Grey” and “Black,” the latter of which was first unveiled as a wear test makeup. The styles may be clean and simple, however, the performance features are anything but.

Each pair’s upper is constructed of a snug, single-colored Flykint forefoot and midfoot with a molded lacing system. This is contrasted by a reinforced synthetic that wraps around the heel and extends to the quarter, serving a dual purpose by increasing the stability and providing the base for a white outlined Swoosh graphic. Under this sits a slightly raised plastic heel shank with React branding.

Although the uppers may provide a sleek look, the meat and bones of the React Infinity Run’s performance features arrive via the midsole. Featuring a wide footbed, a rocker that puts the foot in a forward position and 24% more React foam than previous models like the Epic React Flyknit 2, the midsole’s cushion may be soft, but its performance is decidedly sturdy: it’s been certified for 500-600 miles, when most runners tend to bottom out between 300-350 miles. Textured rubber outsoles complete each look.

The Nike React Infinity Run “Wolf Grey” and “Black” are both available on the Nike webstore now, and retail for $160 USD.

For more from Nike Running, be sure to check out the recently released ZoomX Vaporfly NEXT% “Blue Ribbon Sports,” a shoe that nods to the Swoosh Brand’s earliest days.