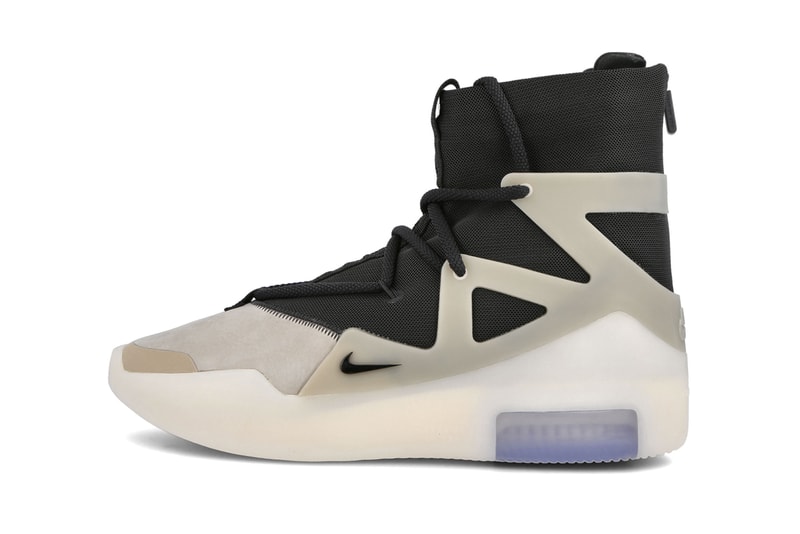 UPDATE: After early images began circulating at the start of the month, various retailers have loaded Jerry Lorenzo and Nike’s new Air Fear of God 1 “String” onto their webpages. Breaking from the single-color style offered by most of Lorenzo’s past Nike releases, the “String” combines a black ballistic mesh collar and midfoot with a supple sandy suede toebox and a jagged plastic support cage. More tan tones are present on the midsole, and double-stacked icy blue Zoom Air units in the heel provide basketball-inspired cushioning.

Barring any unforeseen delays or last-minute changes, the Air Fear Of God 1 “String” will drop on February 28 at retailers like Overkill and BSTN, 18 days later than the rumored February 10 date of arrival. Get an official look at the two-tone creation directly above and expect a retail price of $350 USD, in line with the MSRP of previous FOG 1s.

ORIGINAL STORY (February 3, 2020): The Fear of God x Nike partnership could be starting 2020 with a new iteration of the Nike Air Fear of God 1. Images provided by @upcycle.sneaks on Instagram offer a first look at what could be the silhouette’s “String” model, also dubbed as “Cream Toes” by Jerry Lorenzo himself.

Offered in earthy tones, the Nike Air Fear of God 1 “String” is constructed with a breathable mesh upper in stark black, quickly contrasted by a cream toe box and beige detailing on the TPU cage. Similar to its predecessors, branding hits can be found on the cage’s black mini Swoosh, the embossed Fear of God print on the midsole and a Nike insignia on the heel. The shoe rests on its typical double-stacked Zoom Air sole unit, highlighted by the icy blue pop on the sole window and tied together with tonal black laces.

An official release date and pricing details are yet to be confirmed, but sources point out a drop date of February 10 and a price point of $350 USD. Stay tuned more details.

In other footwear news, the adidas YEEZY BOOST 700 MNVN “Triple Black” is set to drop in-stores only.