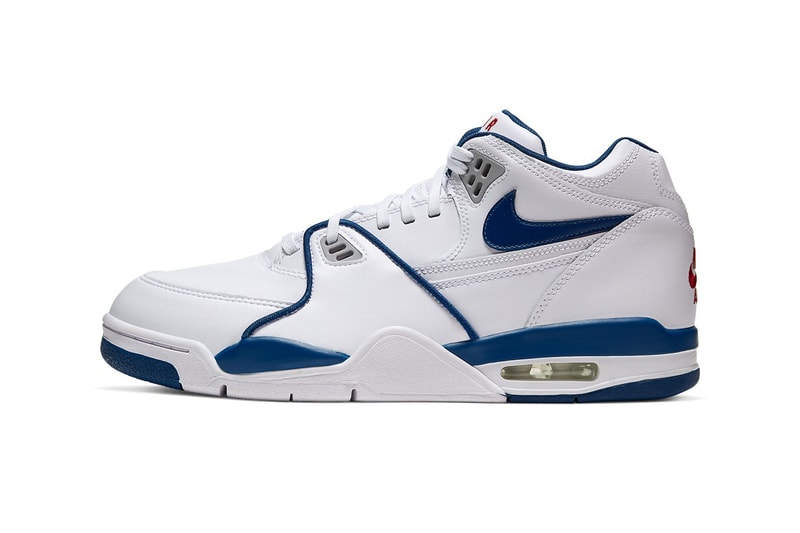 Nike has been bringing back classic colorways of the oft-underappreciated Air Flight ’89 over the past few months, and the latest to join the fray is “True Blue.” Arguably the most memorable style of the throwback hoops shoe once worn by Scottie Pippen, the “True Blue” draws palette and name inspiration from the Air Jordan 3 “True Blue” — which released in 1988, a year before the Flight ’89 debuted in 1989. This specific colorway was even a onetime favorite of none other than Kanye West, and was spotted on his feet multiple times in the pre-adidas YEEZY years.

A 5/8 cut silhouette with an ethos that’s almost Air Jordan 4-esque and an interesting layered look, the Flight ’89 is constructed of smooth leather. Here, that timeless base layer is dressed in a crisp white hue and accented by plenty of sporty blue details. These arrive via the high-perched Swoosh directly below the collar, the thick piping around the forefoot overlay and the trim on the tongue/collar. A bright “Varsity Red” is present on the heel’s Nike Air branding, and both accenting colors collide on the tongue’s “Air Flight” text hit.

Silver top and bottom eyelets proffer a serious contrast, and down below the Air Jordan 4-style midsole is split in between white and blue. An exposed heel Air unit handling the cushioning, with a red, white and blue outsole finalizing the look.

The Nike Air Flight ’89 “True Blue” is available now on the Nike webstore for $120 USD.

In modern-day basketball shoe news, Russell Westbrook‘s Jordan Why Not Zer0.3 “The Family” is set to release on January 9.