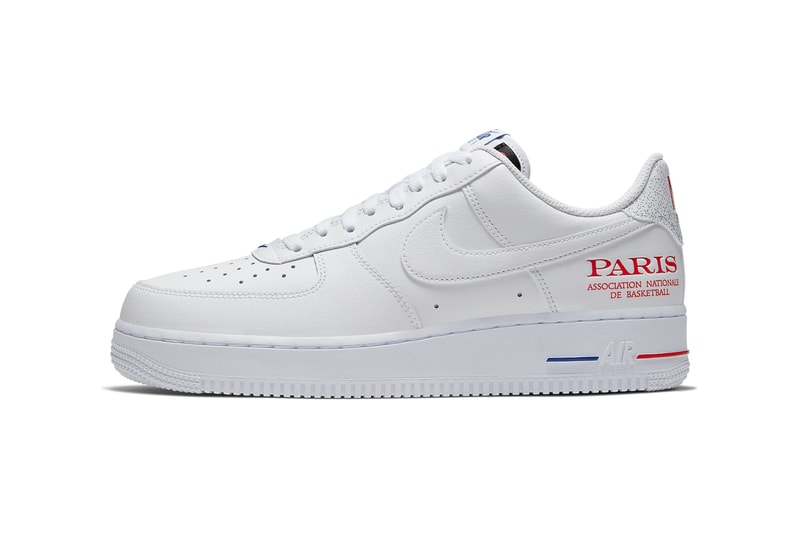 Paris is set to host its first-ever regular season NBA game between the Milwaukee Bucks and Charlotte Hornets this February, so Nike is paying homage to the momentous contest by way of a special Air Force 1. With a crisp colorway inspired by the French flag, the shoe is an elegant nod to Parisian culture and France’s love for basketball.

In classic Air Force 1 style, the upper is formed from a smooth white leather and equipped with a tonal Swoosh. “Association Nationale De Basketball” is stamped in red on the lateral heel counter — and it doesn’t take a jet-setting detective to deduce that that’s French for “National Basketball Association.” Heels feature more text, with “NBA Paris” appearing in red over a blue dotted print. A classic Air Force 1 tag is front and center on the tongue, with a rectangular black and red NBA tag present on the lateral half, partially hidden by the collar.

Small embroidered blue Swooshes placed at the bottom of the throat provide a slight touch of color to the forefoot. Even the insoles get in on the action, splitting between a Paris/NBA graphic on the left foot and a cursive “20” on the right foot. Last but not least, the white midsole features alternating blue and red piping around its white Air graphic for the shoe’s most direct nod to the French flag.

The Nike Air Force 1 “NBA Paris Game” will release at international sites like Nike France in the coming weeks. The MSRP is set at €110 (approximately $122 USD). The game itself is set for January 24 at the AccorHotels Arena.

While the Force salutes France, the Air Jordan 1 Low is nodding to the Chinese New Year with a patterned patchwork-style makeup.