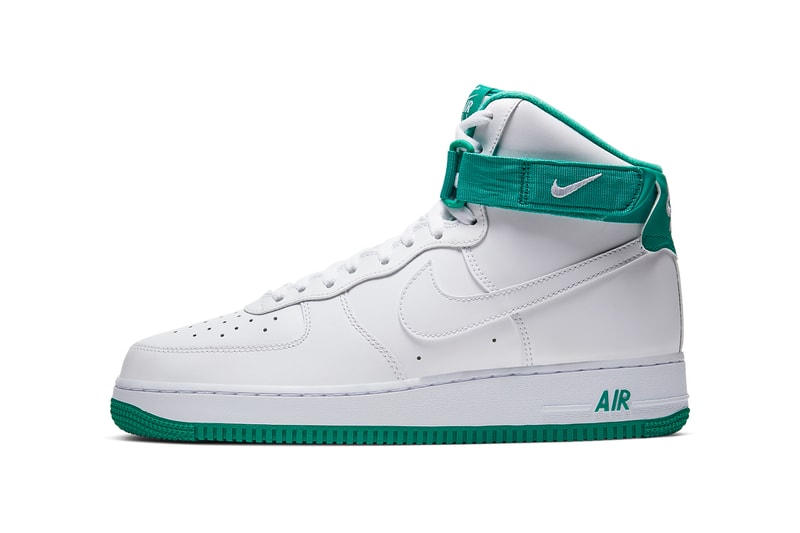 Still standing strong nearly four decades after it first debuted, Nike‘s Air Force 1 High has released in a retro “Neptune Green” makeup. Combining crisp colorblocking and classic construction, the “Neptune Green” offers a summer-ready palette and a sturdy construction that can certainly be worn through the winter, making for an all-season style.

Although the shoe’s upper panels and midfoot Swoosh are composed almost entirely of smooth and simple white leather, the design is not without its touches of flair. The shade of green that gives it its name is present on the tongue tag, heel tab, and sockliner. It’s also used on the strap — or proprioceptus belt, as designer Bruce Killgore called it. Embroidered white Swoosh graphics provide pops of style on the strap and heel. Down below, a white rubber midsole with green Air branding and a green cup outsole complete the look.

It’s not difficult to picture the Air Force 1 High “Neptune Green” gracing an NBA court in the ’80s. However, since Rasheed Wallace retired the High has become strictly a casual sneaker, and if you’re looking to add a pair to your rotation, you can get them at Nike’s webstore now for a reasonable $100 USD.

If you prefer a bit more flair on your Forces, there’s also a new “Satin Pack” inspired by US Army jackets, and early images of a new CLOT collaboration dressed in rose gold silk recently surfaced as well.