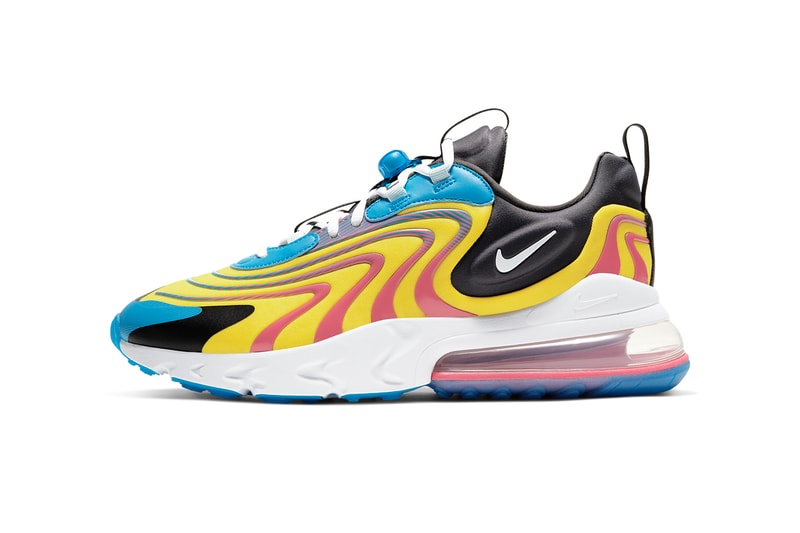 When the omnipresent Travis Scott‘s Nike Air Max 270 React collaboration debuted in December, its bold, wavy look surprised and delighted Cactus Jack loyalists and Nike Sportswear buffs alike. Now it’s been revealed that the uncommon design is not a one-off — it’s in fact a new model dubbed the Air Max 270 React ENG. Essentially the second iteration of the Air Max 270 React, the ENG expounds upon the design ethos proffered by its predecessor, moving the model forward by offering a healthy dose of retro flair to contrast with its modern tech. It’s set to kick things off with a duo of bold colorways: “Laser Blue” and “Eggplant.”

“Laser Blue” opts for a cotton candy-esque mix of bright yellow, blue and pink hues, while “Eggplant” gives off Joker — the original comic book version, not the Todd Phillips/Joaquin Phoenix iteration — vibes with a mixture of purple and neon green shades. The 270 React ENG’s design is mostly centered around the wavy lines on its upper, which are slightly reminiscent of the classic Air Max Plus but use gradient fades to add bold detailing.

Swooshes are kept significantly smaller as well, appearing on a raised oval below the neoprene collar. Each style also features a translucent lace toggle and extended tongue pull tab for extra texture. Although the upper is entirely new, the bottom half is left unchanged with cored-out React foam in the forefoot and an Air Max 270 cushioning unit in the heel. Outsoles with a nubbed traction pattern finalize the stylings.

The Nike Air Max 270 React ENG will debut on January 16 at stockists like Nike SNKRS Japan, with a retail price of ¥18,700 (approximately $171 USD). A Western release will follow shortly thereafter.