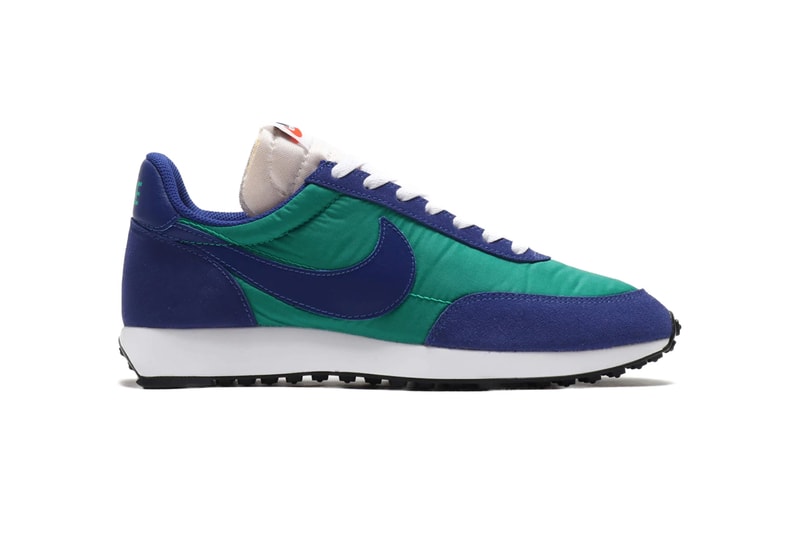 One of Nike‘s most influential running shoes from its early days, the Air Tailwind 79 has since morphed into a lifestyle favorite, and now it’s appeared in a crisp “Neptune Green” colorway. Sleek, simple and stately, the Tailwind is a versatile piece of casual footwear, so here it plays up its retro style with bold colorblocking and traditional materials.

Where some Tailwinds opt for a mesh upper, the “Neptune Green” instead leans on a smooth nylon. This richly colored base is quickly accented by a plentiful helping of navy overlays that switch between a duo of materials: heel clips and mudguards use suede, eyestays and Swooshes a smooth leather. More navy is present on the sockliner, while white laces and an exposed foam tongue with a classic Nike graphic hit finalize the top half.

Down below, the slim white midsole may appear to be nothing more than a simple chunk of EVA foam at first, but within its heel’s folds is a concealed Air Max cushioning unit. This is of special note: the Air Tailwind 79 was the first-ever shoe to use aerospace engineer M. Frank Rudy’s now-quintessential Air cushioning system — almost a decade before it was made visible for the first time on Tinker Hatfield‘s Air Max 1. A black waffle outsole completes the look.

The Nike Air Tailwind 79 “Neptune Green” is available now at retailers like atmos Tokyo, with an MSRP of ¥9,900 JPY (approximately $91 USD).

On another front in the ever-expanding world of the Swoosh, the Air Jordan 1 React has been dressed up in a “Bred”-style colorway.