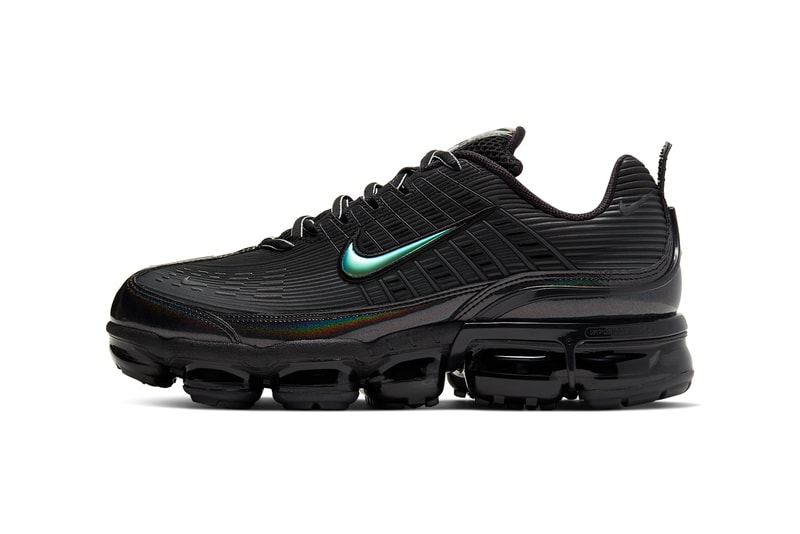 Sleek and speedy, the upper is a true-to-the-original recreation of the Air Max 360’s striking style thanks to its ribbed textures and swooping lines. This black synthetic base is offset by iridescent patent leather accents on the mudguard and tongue, the latter of which also features a modified Air VaporMax 360 text graphic. This hit is fully reflective, as is the trim running down the throat and toebox.

Another interesting tweak that Air Max aficionados are sure to appreciate is the tonal “2020” graphic climbing up the eyestays — this replaces the “2006” embellishment that was present on the original 360 design. Metallic green Swooshes surrounded by thickly stitched black embroidery provide branded flair and texture, while a rubberized heel tab, tonal black heel/forefoot Swooshes and silver-trimmed laces complete the look.

Where the top half mixes heritage and innovation in equal measures, the bottom half is all future-forward. A full-foot jet black VaporMax cushioning unit sits under a layer of soft black Cushlon foam, all of which is held in place by a black plastic heel clip with tonal branding.

This isn’t the first time Nike has mixed Air Max silhouettes — the Air Max Plus, Air Max 95 and Air Max 97 have all received the VaporMax treatment. However, as the Air Max 360 was the first-ever shoe to offer a true full foot Air cushioning unit, this shoe is a homage to an influential yet often under-explored piece of the technology’s lineage.

The Nike Air VaporMax 360 “Black/Anthracite” is available at Nike Japan and atmos now for a tax-included price of ¥24,750 JPY (approximately $226 USD).

For more Max news, check out how Nike turned the Air Max 90 into a slide sandal.