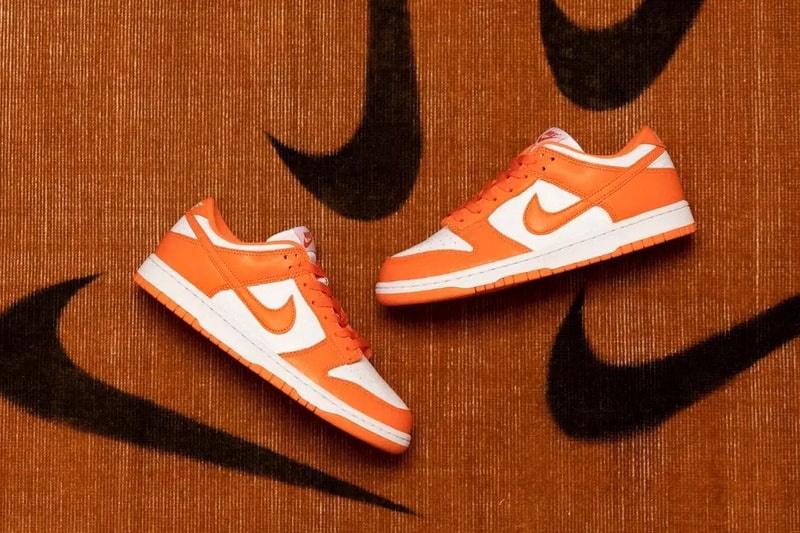 Nike‘s ever-influential Dunk is turning 35 this year, and as part of its anniversary celebrations the recognizable “Syracuse” style is returning in Dunk Low form. A colorway that originally debuted on a Dunk High as part of Nike’s 1985 Be True To Your School — BTTYS for short — pack alongside 11 other collegiate-themed styles for schools like UNLV and Michigan, the “Syracuse” offers a simple-yet-effective take on the Orangemen’s signature palette.

Although this Dunk Low lacks the high-cut construction of its famous forefather, colorblocking, proportions and shape are all recreated in a masterful fashion. Crisp white leather is used on the quarter, toebox and heel, while vivid orange hits the mudguard, eyestays, midfoot Swooshes, rear pieces and heel tabs — which also feature an embroidered Nike text hit. White nylon tongues equip a orange-accented tag and are covered by crisscrossing orange laces. White rubber midsoles and orange outsoles complete the look.

2020 has already been a busy year for the Dunk, both on the Nike Sportswear and Nike SB front. The Dunk Low “Plum” released to great fanfare earlier in February, and was accompanied by a Valentine’s Day-inspired StrangeLove Skateboards SB Dunk Low. Travis Scott‘s highly anticipated SB Dunk Low collaboration is set to release later in February, and AMBUSH premiered a dashing Dunk High at Nike’s recent Future Sport Forum as well.

Originally previewed on Instagram by Don C, the Nike Dunk Low “Syracuse” is set to release at Australian retailers like Subtype on February 15, retailing for $140 AUD (approximately $94 USD). A North American release is likely to follow later this spring, and you can expect other BTTYS pack-inspired styles to arrive over the course of the year.