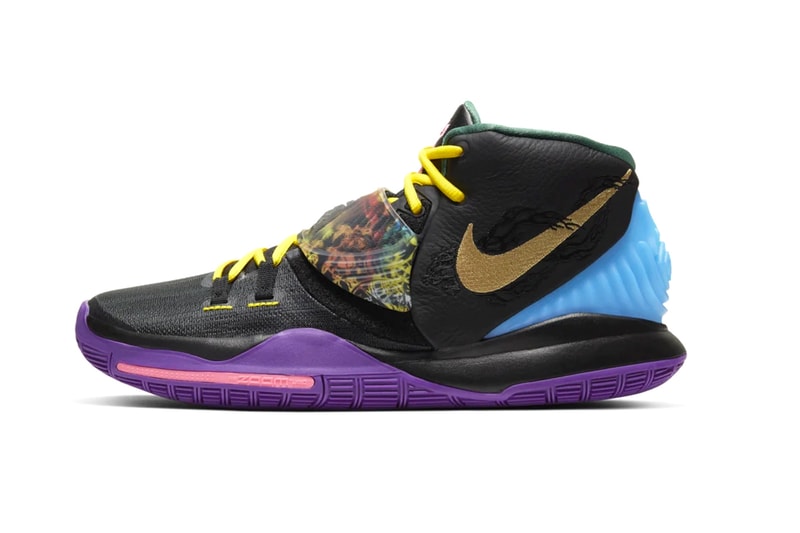 In celebration of the upcoming Lunar New Year and the Year of the Rat, Nike is releasing two special colorways of the Kyrie 6. Aftering debuting the first yellow-clad pair, Beaverton is now offering a closer look at the second colorway, retaining a psychedelic aesthetic inspired by the traditional Chinese folk-art of “Jianzhi” (paper cutting).

In contrast with the first colorway unveiled previously, this second colorway opts for darker shades with contrasting elements. The upper is constructed with a black mesh forefoot with tumbled leather of the same color making up the tongue and the ankle region, providing a stark contrast with the collage-print midfoot strap featuring the Kyrie’s Seeing Eye motif — which also graces the heel in a vibrant icy blue color. Bright yellow laces run up the throat and tongue to add an extra touch of contrast along with the pink embroidered tongue logo and gold Swoosh logos at the lateral side. Completing the look is a forest green collar and lining, and a purple outsole complemented by a streak of pink.

For those interested, the second Kyrie 6 “Chinese New Year” colorway will be available January 15 over at Nike’s online store, with a retail price of $110 USD.

Elsewhere in sneakers, ASICS has dressed its GEL-Nandi 360 in “Carrier Grey/Smoke Blue.”