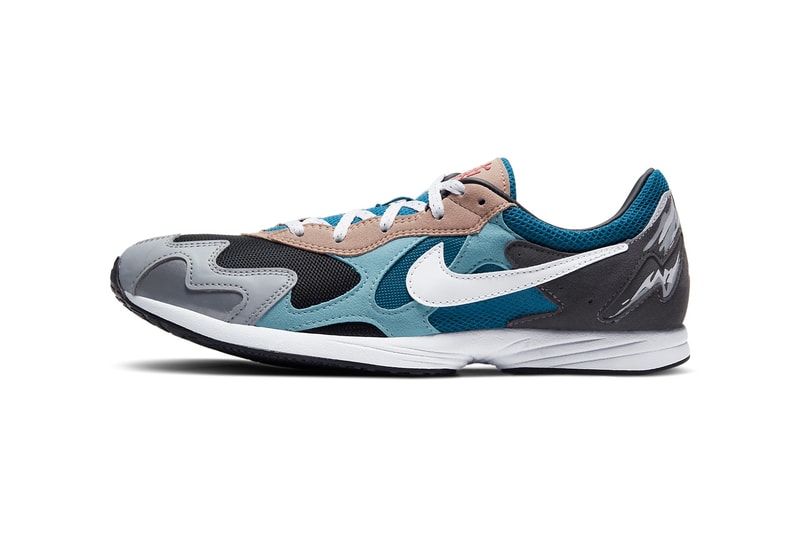 Nike has revived its Air Streak Lite, a sleek running shoe that originally released in 1995. Combining a low-slung silhouette with plenty of unique detailing, the Air Streak Lite has served as the launch point for many of Nike Running‘s modern-day silhouettes like the Air Streak 7 and Air Streak Lite 4. Now it’s set to settle into a comfortable second life as a casual sneaker, starting off with this “Back On Track” style.

Still strikingly slim almost 25 years after it came to market, the Streak Lite’s upper is constructed of blue and black mesh. This is quickly overlaid with wavy leather and suede accents, dressed in light blue and two different shades of grey. Each piece provides an air of rapid motion — most noticeably, the toebox overlay almost looks like it’s being blown back by an intense gust of wind. White Swooshes provide branding, and the heel equips mountain graphics by way of its printed peaks, cut-out lightning bolts and a circular embroidered badge.

Tan is added into the mix on the eyestays and tongue, the latter of which features a large red Japanese kanji character that translates to “speed” in English. Insoles offer the same circular mountain stamp as the heel, and surround it with a topographical map-style print. An ultra-slim white midsole and pebbled black rubber outsole complete the look.

The Air Streak Lite is an interesting touchpoint in the history of Swoosh Brand running footwear, as high-end styles of today like the ZoomX Vaporfly NEXT% discard sleek midsoles in favor of thick, cushioned designs with carbon fiber plates. This shows how much footwear tech — and our understanding of — it can change in a quarter century. If you’re looking to pick up this piece of running footwear history, you’ll be able to do so when it releases on Nike SNKRS Japan come December 27 for ¥12,100 JPY (approximately $110 USD).

Elsewhere in the world of retro runners, ASICS presented two new colorways of the GEL-Kayano 5 OG.