She is a singer and model who often sets pulses racing with her eye-catching ensembles.

But Pia Mia preferred a more casual look as she left Japanese restaurant Nobu in Malibu with her friend on Monday evening.

The blonde bombshell, 24, showed off her toned legs in an oversize dark green flannel shirt, worn over a grey crop top.

Casual: Pia Mia preferred a more relaxed look as she left Japanese restaurant Nobu in Malibu with her friend on Monday evening

She paired her stylish outfit with a pair of tan Timberland boots and slung a Louis Vuitton purse across her shoulder.

Pia pulled back her wavy blonde locks in a high ponytail and opted for a full coverage make-up look.

The Do It Again hitmaker made sure to protect herself with a black face mask during her night out on the town.

Pia’s appearance came after she teased her Instagram followers about a new ‘project’ over the weekend, sharing a snap of her behind a microphone in the studio. 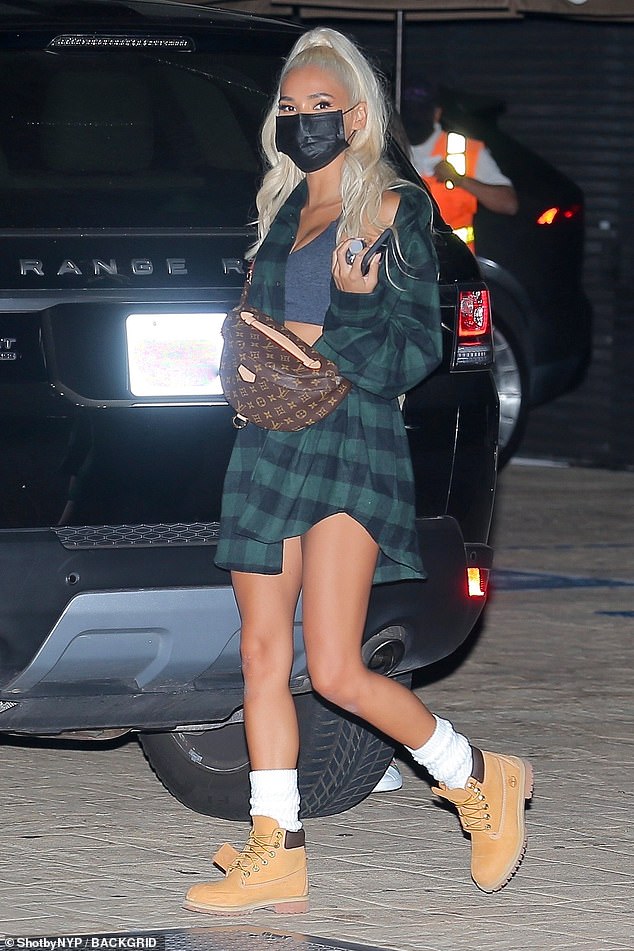 Bombshell: The Do It Again hitmaker, 24, showed off her toned legs in a long dark green flannel shirt, worn over a grey crop top

She wrote alongside the picture: ‘Love my guys and the project we made over the past couple weeks… can’t wait to give it to you.’

Fans were delighted by her intriguing post, which raked in more than 36,000 likes and hundreds of comments.

The Guamanian singer made the announcement on Instagram alongside a sexy post which saw her posing in skimpy lingerie.

Taking to social media, she wrote: ‘Baby, check me out I’m finally free!! Only Fans.’ 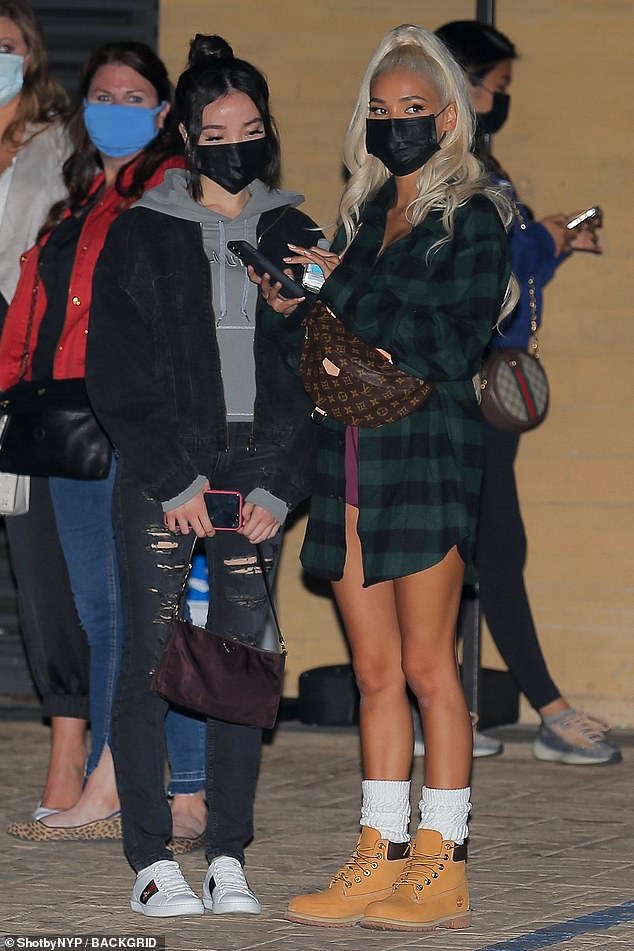 Night out: Pia styled her wavy blonde locks pulled back in a high ponytail and opted for a full coverage make-up look as she enjoyed Japanese food with her friend

Keen to plug her new venture, she shared even more sultry snaps the following day.

OnlyFans is an online service that allows for public figures to charge fans a subscription to their site, where they often share content usually deemed too provocative for other social media platforms.

Since launching in September 2016, OnlyFans has reportedly paid out more than $1billion to creators, according to the company. 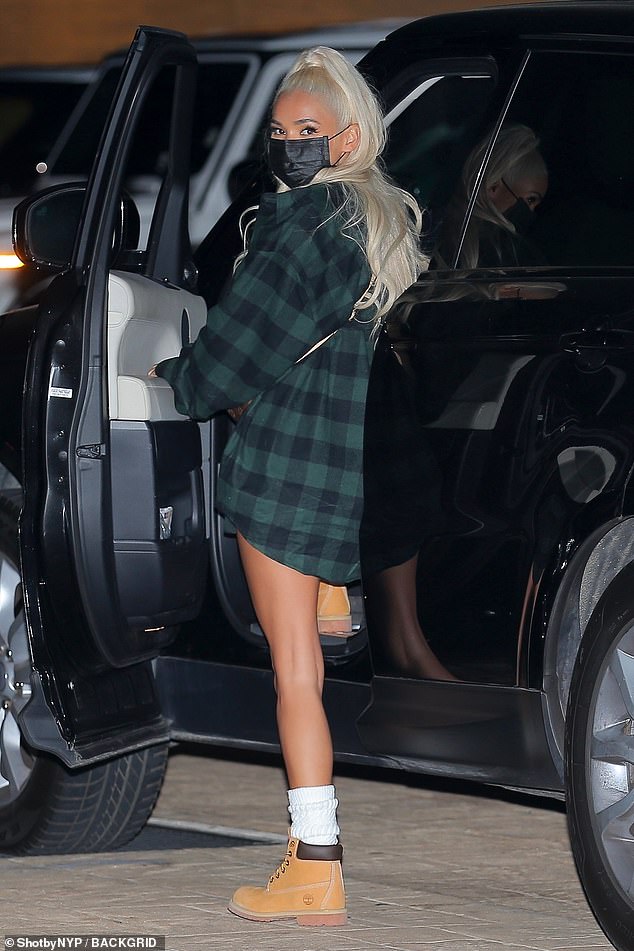 Safety: Pia made sure to protect herself with a black face mask during her night out on the town

The X-rated service currently has over 50 million registered users and 700,000 content creators.

She is often spotted out with her childhood friend Sofia Richie and has even appeared on pal Kylie Jenner’s family reality show Keeping Up With The Kardashians. 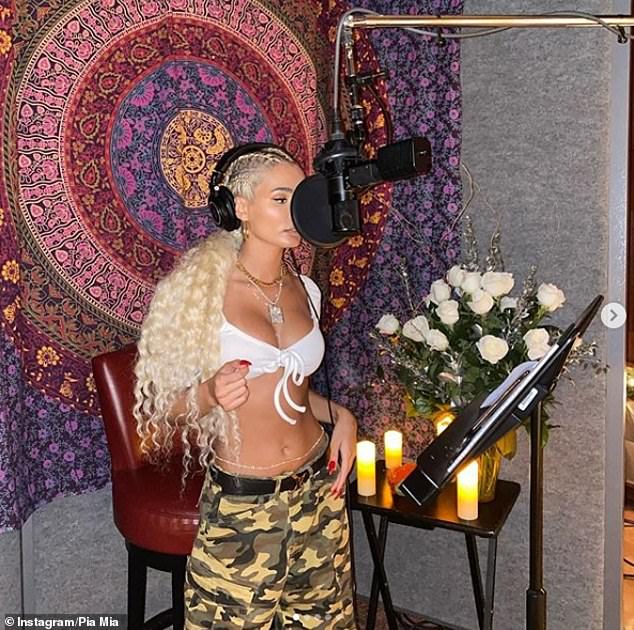 Intrigue: Pia she teased her fans about a new ‘project’ over the weekend, sharing a snap on her Instagram account of her behind a microphone in the studio

Pia has previously revealed to Daily Mail Australia how she deals with online trolls.

The social media sensation said that she does not take negative comments to heart and tries not to let things affect her.

Instead, she confessed that she focuses on the positive aspects of life by ensuring she does what makes her happy.

She explained: ‘I’ve never really been one on social media to take things to heart. I’m on there just to share life and be positive and happy. I don’t let things affect me. I do what I want and I do what makes me happy.’ 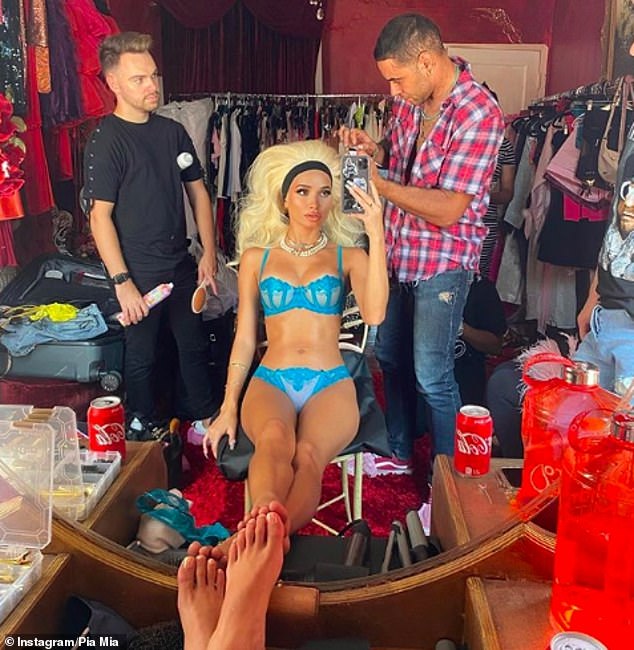 Racy: Last month, Pia announced that she had joined X-rated subscription site OnlyFans, revealing her big news in a sexy Instagram post which saw her posing in skimpy lingerie