She’s expecting her third child in March next year with fiancé Scott Sinclair.

And Helen Flanagan, 30, showcased her growing baby bump as she revealed that she is still suffering from nausea in an update for her fans on Sunday.

The former EastEnders star has been suffering from Hyperemesis – a pregnancy complication characterised by nausea, vomiting, dehydration and weight loss. 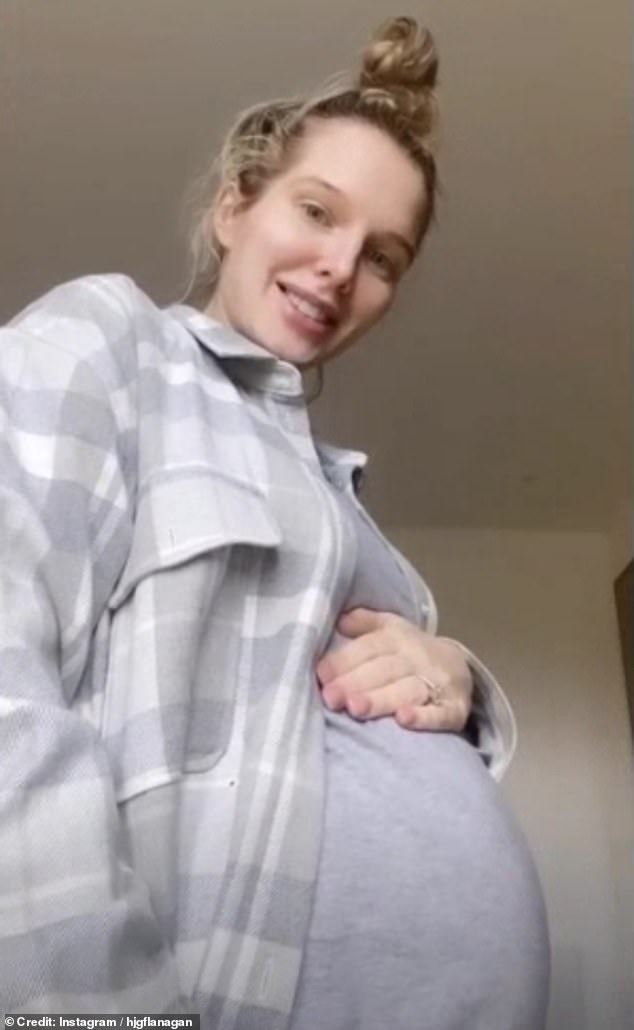 Growing bump:  Helen Flanagan, 30, showcased her growing baby bump as she revealed that she is still suffering from nausea in an update for her fans on Sunday

Taking to her Instagram stories on Sunday, she admitted that she feels she has ‘to eat all the time’ as it makes her feel better.

The actress said: ‘I’m going to make a vegan lasagna. Also, I still have nausea in this pregnancy. It’s nothing like it was but yeah constantly feel nauseous.

‘So I just feel like I’ve got to eat all the time and eating always makes me feel better. Joys.

‘Also I don’t know if you can see but honestly bump feels like I’m getting really, really big now. 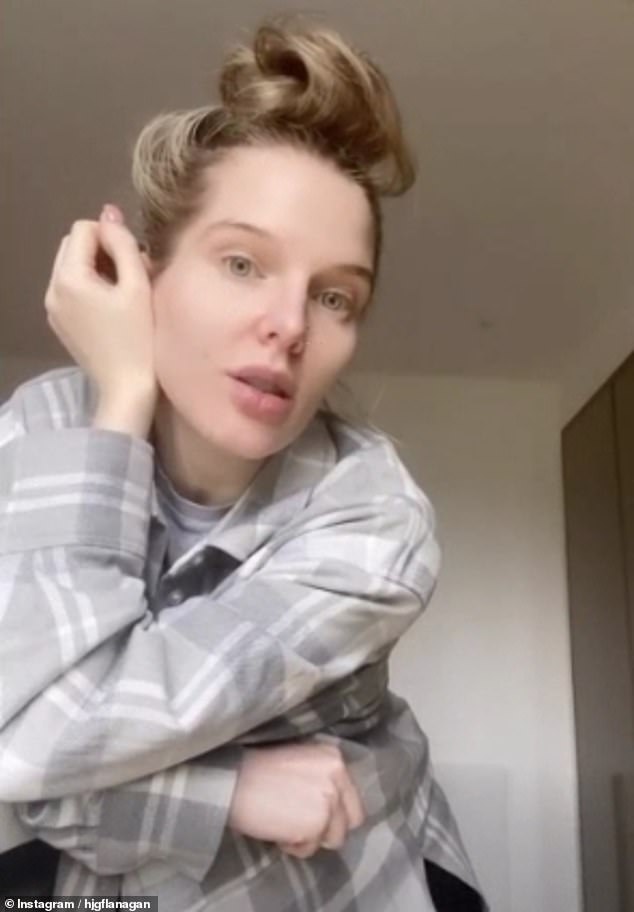 Nauseous: The former EastEnders star has been suffering from Hyperemesis – a pregnancy complication characterised by nausea, vomiting, dehydration and weight loss

Helen is already mum to daughters Matilda, five, and Delilah, two, with her footballer fiancé Scott.

On Thursday, Helen celebrated the milestone of her 20-week scan and said she’s convinced she’s expecting another baby girl.

Stroking her bump, she said on Instagram stories: ‘I think I’m carrying a girl but going to have a surprise, so tempted to find out.’ 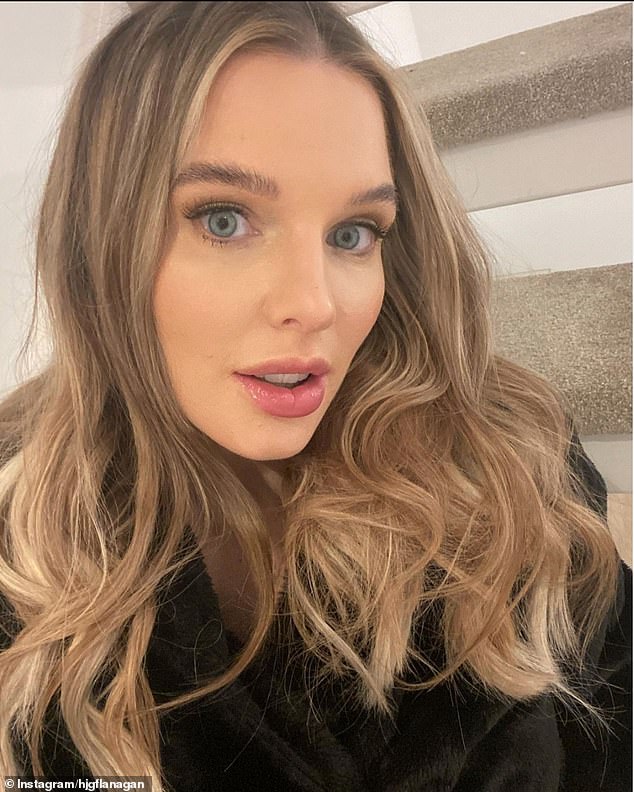 More food: The former EastEnders actress admitted that she feels she has ‘to eat all the time’ as it makes her feel better

Earlier this month, the TV star admitted that she hasn’t been enjoying her third pregnancy.

Helen shared the message in the caption of a bikini snap posted to her grid on Sunday.   She explained that while she is ‘super grateful’ to be expecting her third child, she has struggled throughout her pregnancy because of hyperemesis.

‘Can’t wait to meet you my little darling bring on March ,’ Helen began her caption. ‘Super grateful for my pregnancy and I can’t wait to hold my little one but to be honest I’m not really enjoying this pregnancy.’

Reflecting on her pregnancies with daughters Matilda, five, and Delilah, two, Helen continued: ‘I loved being pregnant with Matilda and Delilah.’

‘I think with Matilda everything was just so new and super exciting and with Delilah I just loved having my bump and everything about it after I got over the hyperemesis each time.’

‘This time round I just don’t feel like I’m enjoying it the same. Maybe because it’s my third and I just feel super tired and I know it’s going to be full on, I always just feel nauseas a lot and I just dont feel myself since I fell pregnant.’ 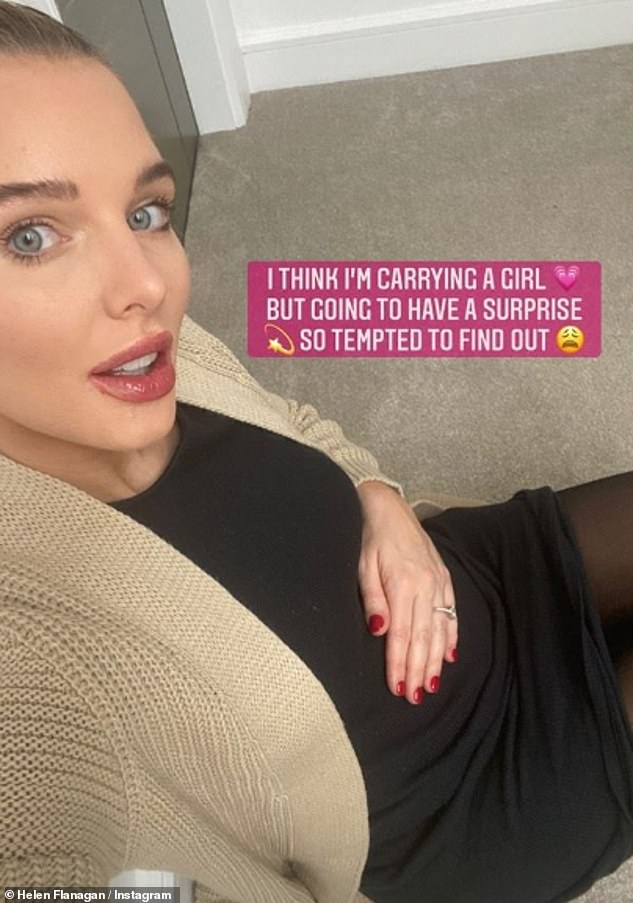 Milestone: On Thursday Helen celebrated the milestone of her 20 week scan, revealing she suspects she is expecting a girl

Helen wanted to clarify that she is happy to be expecting, explaining: ‘It’s not that I’m ungrateful and I think it’s okay to feel however you feel in pregnancy.’

‘One of my close friends felt super anxious her whole pregnancy about the baby being okay and my mum said she felt pretty down in all her pregnancies ( I am one of four) but was on cloud 9 when the baby arrived.’

‘It’s okay to feel however you feel, pregnancy or after the baby is born, all is okay. My mum keeps telling me to enjoy it as it’s extremely likely this is my last pregnancy.’

Helen went on to explain that she had been forced to move back in with her parents during early pregnancy as her footballer fiancé Scott Sinclair was busy training and she needed help with her girls. 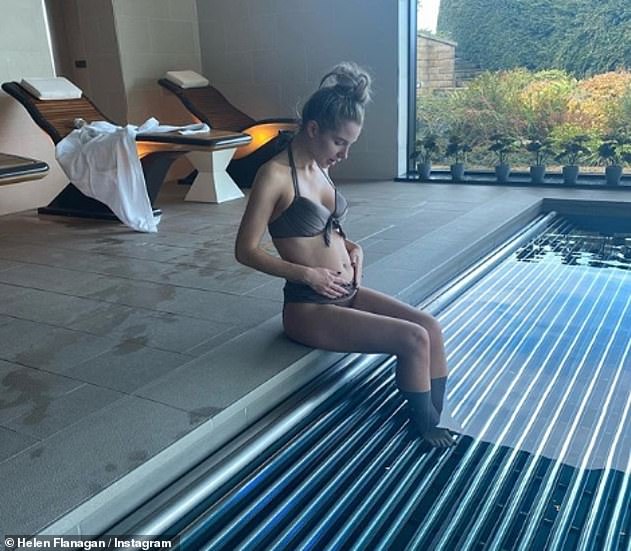 Expecting: Helen Flanagan updated her followers earlier this month in an Instagram post in which she admitted that she has so far not been enjoying her third pregnancy

‘I was really unwell this pregnancy with hyperemesis and had to move back to my parents house as I was so unwell and couldn’t look after the children and scott was training. ( I was allowed a support bubble with my parents, I was in and out of the early pregnancy ward ),’ she wrote.

‘I don’t think I could ever go through hyperemesis again and I had it each pregnancy and wiped me each time.

‘It was really miserable and this time round so strong, wouldn’t want to do that to the children I already have, and I relied on my mum for everything.’

Helen concluded by revealing she expecting this pregnancy to be her last, partly due to her experiences with hyperemesis.

‘I think there’s a sadness for women when they know it’s their last however for me that’s being taken away by the hyperemesis so that’s one positive,’ she said. 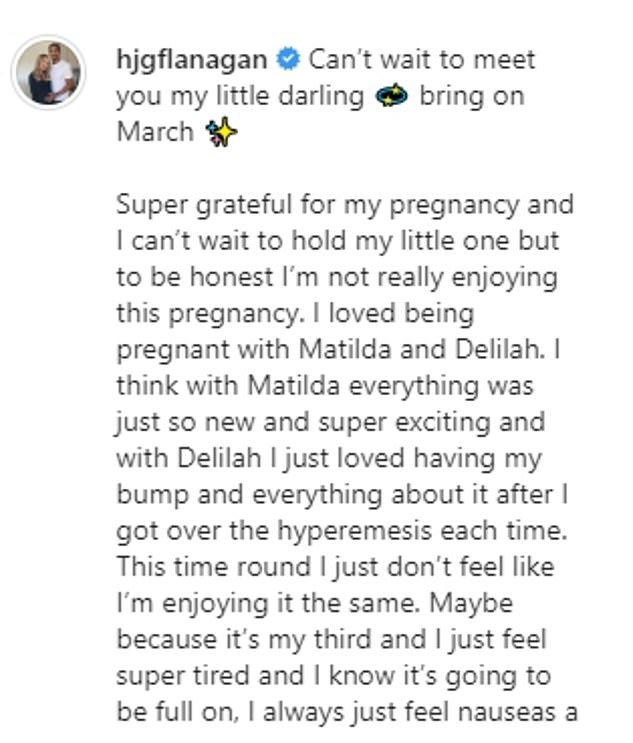 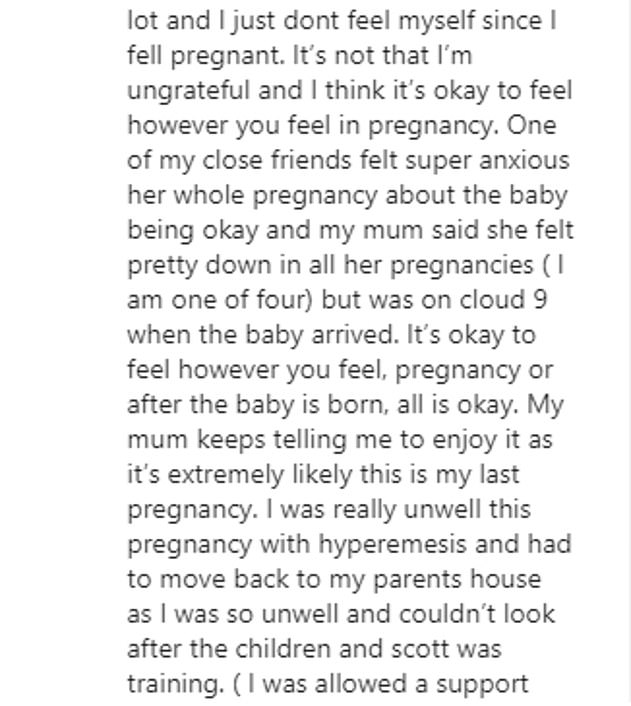 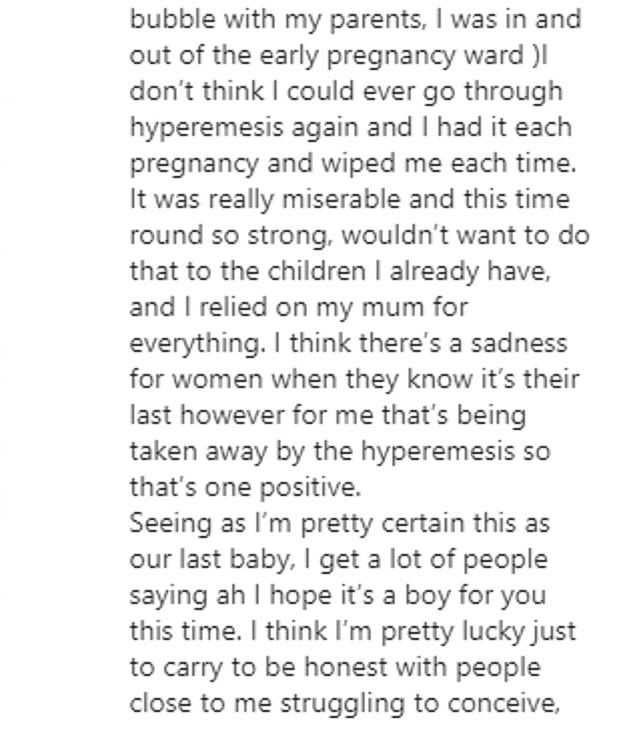 Tough: Helen explained that while she is ‘super grateful’ to be expecting her third child, she has struggled throughout her pregnancy because of hyperemesis

‘Seeing as I’m pretty certain this as our last baby, I get a lot of people saying ah I hope it’s a boy for you this time. I think I’m pretty lucky just to carry to be honest with people close to me struggling to conceive, I’m just grateful to carry a baby.’

The soap star excitedly revealed she is expecting her third child with footballer fiancé Scott Sinclair, 31, in September.

The couple had planned to tie the knot this year after getting engaged in 2018, but have been forced to put their wedding on hold due to the coronavirus pandemic.

They are yet to discover the sex of their unborn baby but have told daughters Matilda and Delilah whatever they have will be perfect for the family.