The fashion mogul, 31, went Instagram official with his stunning new girlfriend, 26, on Tuesday, after splitting from long-term girlfriend Amy Reddish in 2019.

The hot new couple looked smitten as they posed up at The Great Mosque, Abu Dhabi, with Nada putting on a glamorous display as she embraced her love. 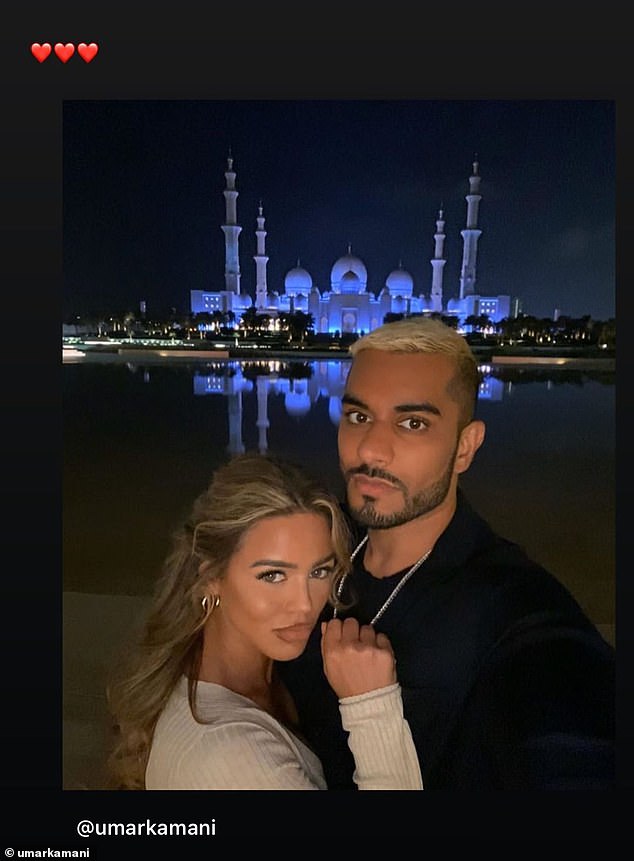 Hot couple: The fashion mogul, 31, went Instagram official with his stunning new girlfriend, 26, on Tuesday, after splitting from long-term girlfriend Amy Reddish in 2019

Manchester-based Nada is no stranger to putting on a sizzling display on social media for her 249,000 Instagram followers.

One snap shows her exhibit her ample cleavage and honed midriff in a yellow crochet bikini while standing seductively at a patio door.

A pair of matching high-rise bottoms draw the eye to her toned legs, while teasing a glimpse of her pert derriere.

Her caramel tresses were styled in soft beachy waves while her pretty features were enhanced with a radiant palette of make-up. 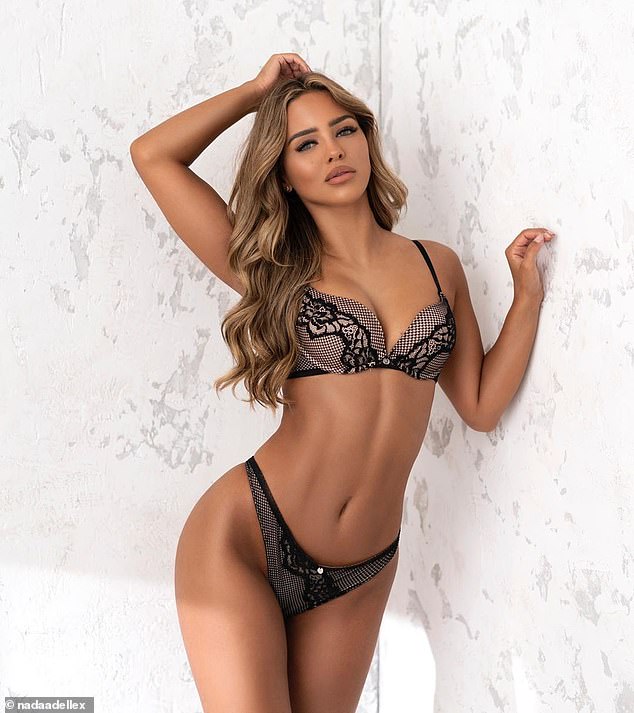 Racy: Manchester-based Nada is no stranger to putting on a sizzling display on social media for her 249,000 Instagram followers 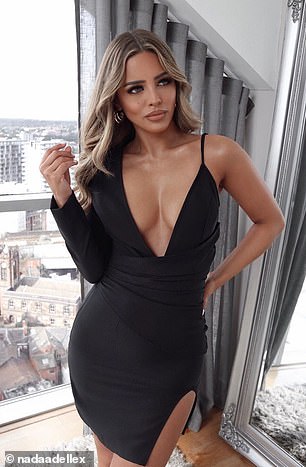 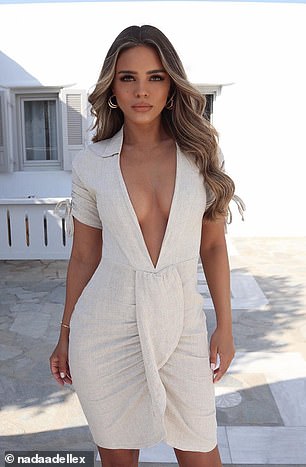 Model moment: The beauty looks incredible in her social media snaps, and puts on a very busty display 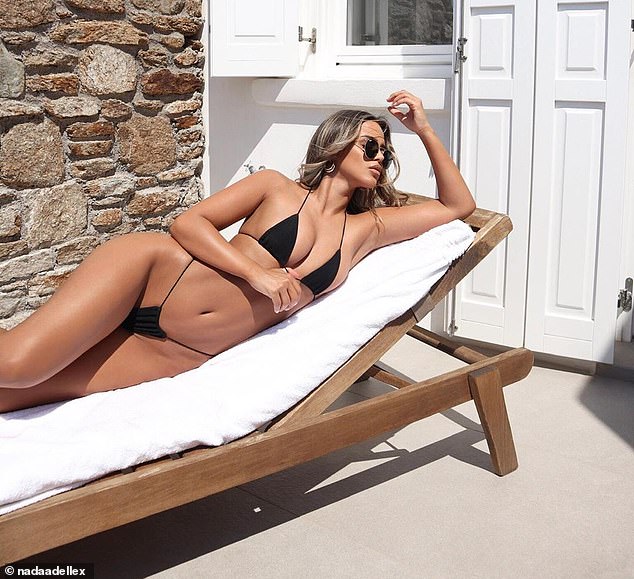 Beach babe; The star put on a sizzling display in a tiny string bikini

A second sizzling snap saw the star don racy lace lingerie which showcased her enviably toned frame as she posed up.

The law graduate oozed confidence as she showed off her peachy posterior in thong bikini bottoms for a further high-fashion photo, modelling sexy swimwear in further snaps.

Showing she can nail glamorous looks too, the star showcased her braless cleavage in a perilously plunging dress, while also revealing her washboard abs in a variety of crop-tops. 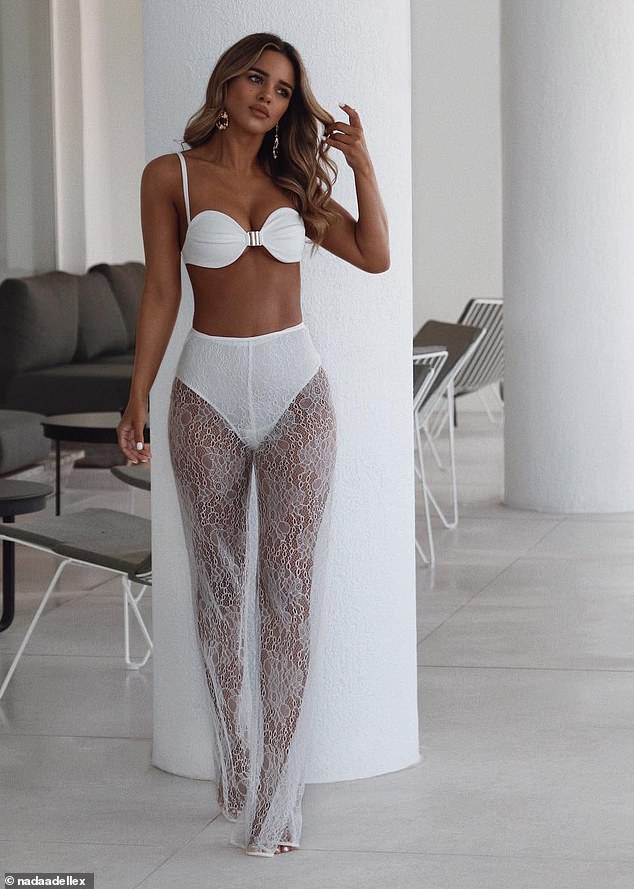 Fashionista: Model Nada has been featured in magazines such as Look Magazine and Harpers Bazaar 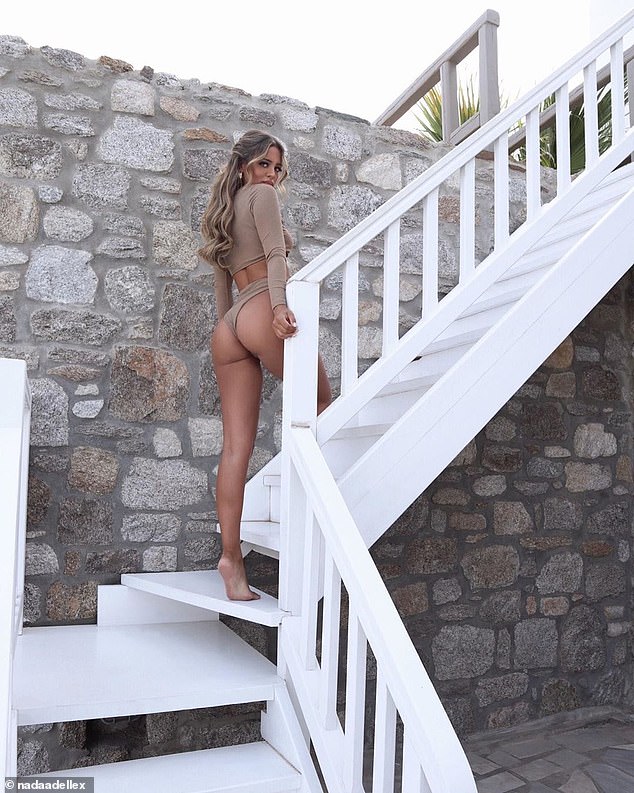 Cheeky: The star oozed confidence as she showed off her peachy posterior in thong bikini bottoms for a further high-fashion photo 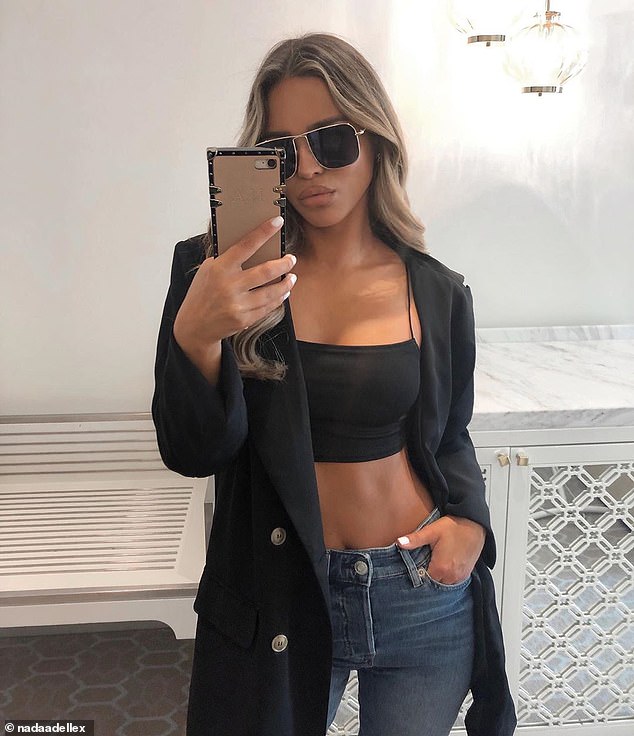 Honed: The star showed off her honed midriff in a tiny crop-top

Model Nada has been featured in magazines such as Look Magazine and Harpers Bazaar.

She has also fronted a campaign for Beyonce’s Ivy Park brand campaign, and has worked with make-up brand L’Oreal.

Umar, from Manchester,  is the son of billionaire Boohoo founder Mahmud Kamani.

In 2012, Umar and his brother Adam co-founded PrettyLittleThing after witnessing the phenomenal success of Boohoo. 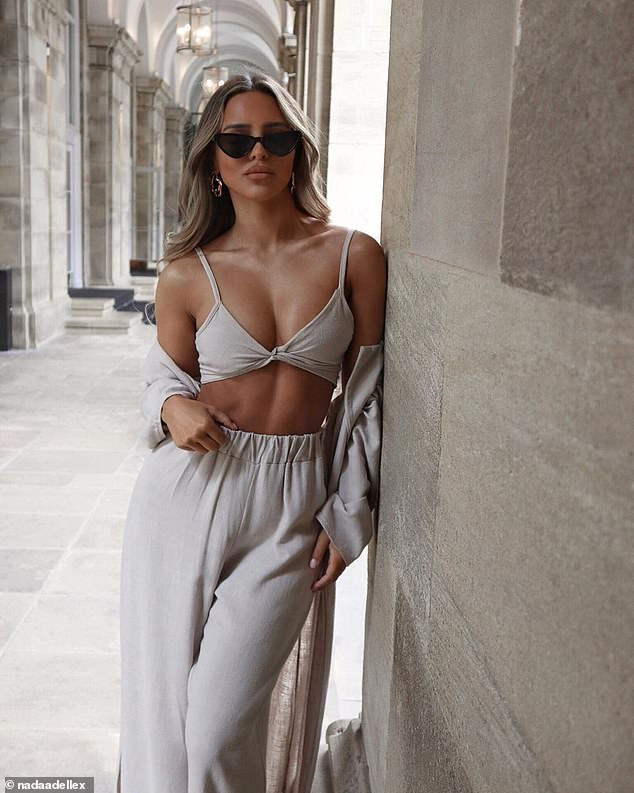 Amy has since been involved in the creative and styling side of the site and has always shared the couple’s enviable lifestyle with her 35k Instagram followers.

The Kamani family has a rags to riches back story, with Indian immigrant Mahmud managing to grow his market stall into a multi-billion pound business.

Mahmud’s father Abdullah moved the family to Kenya, where many Indian families had prospered under the British Empire.

Mahmud was born there in 1964, but four years later the Kamanis were forced to flee to Britain by increasing unrest and draconian employment laws that favoured native Kenyans. 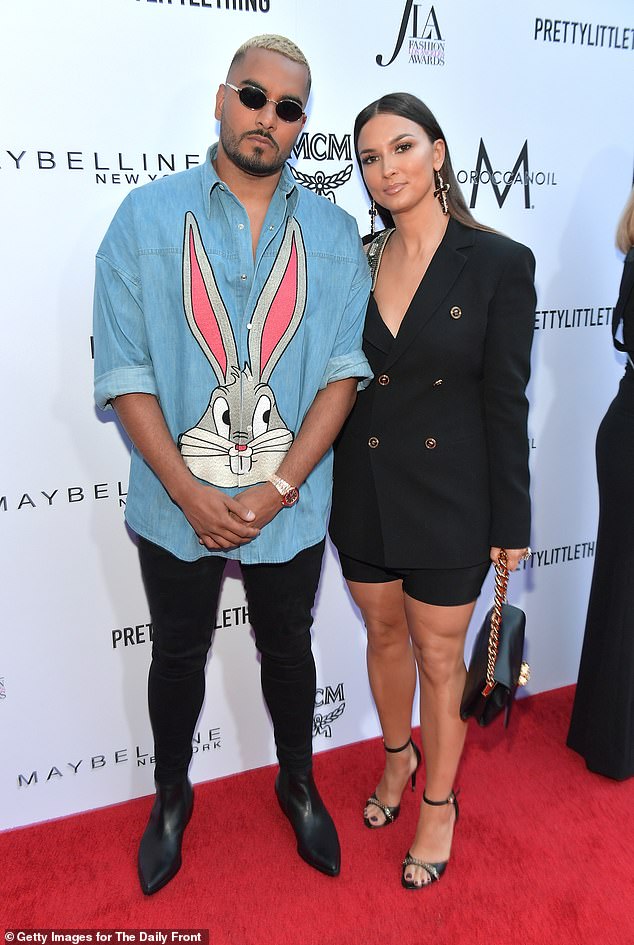 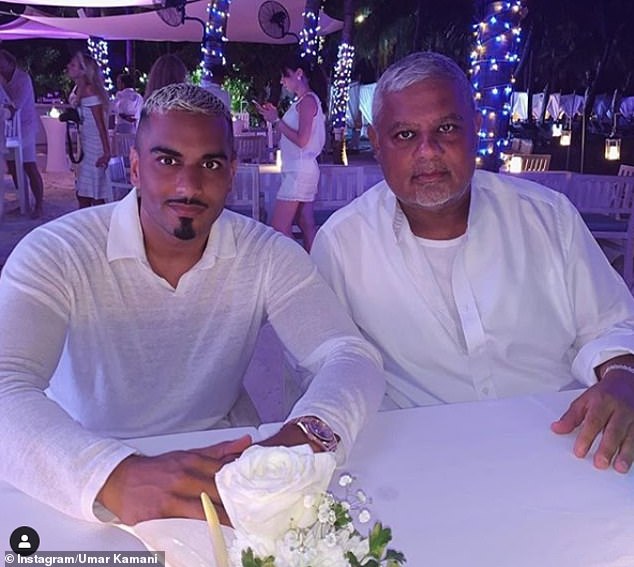 They settled in Manchester, where the entrepreneurial Abdullah sold handbags on a market stall to feed his family, before investing in property and founding the wholesale textile business Pinstripe, where Mahmud worked, using family connections in India to source garments.

By the early 2000s, the firm was selling nearly £50 million of clothing a year to High Street names such as New Look, Primark and Philip Green’s Topshop.

Spotting the potential in the growth of the internet, Mahmud set up his online retailer in 2006 that would deliver their own-branded fashion at rock bottom prices, starting out with just three staff and operating out of a Manchester warehouse.

Today it has a workforce of more than 2,900, and celebrity advocates including everyone from Little Mix to Tallia Storm. 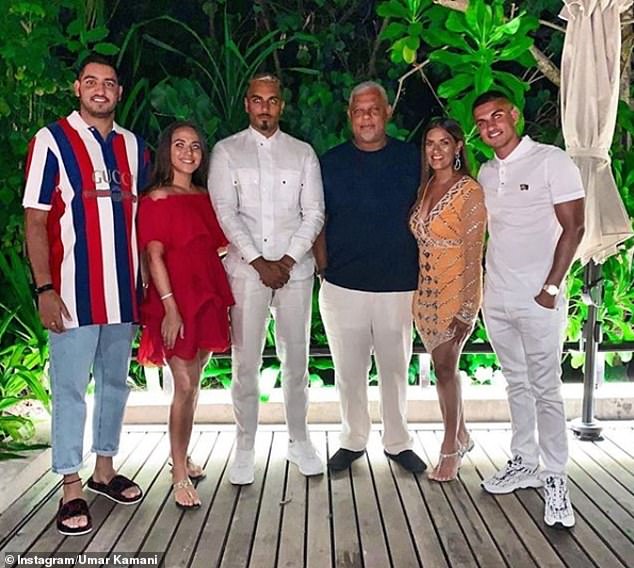 WHO IS UMAR KAMANI?

Umar is the son of Mahmud Kamani, 52, who managed to turn a Manchester market stall into a vast fortune.

He set up Boohoo in 2006 with the intention of selling up-to-date clothes for low prices.

Today, Boohoo has a workforce of 1,415, with teams in Manchester, Burnley, London, New York and Los Angeles.

It is endorsed by celebrities like Little Mix and the cast of TOWIE, and is worth an eye-watering £2.6 billion.

In 2006 Umar started working for the family business as a manager, while attending theatre school.

He went on to study international business at Manchester Metropolitan University, and in 2012 he and his brother Adam co-funded PrettyLittleTthing after witnessing the phenomenal success of Boohoo.

Before he founded PrettyLittleThing, Umar Kamani admits he was an amateur boxer and playboy who cared only about partying and chasing women. Now he calls this rather hedonistic lifestyle ‘work’.

One day he’s ‘topping up his vitamin D’ in the infinity pool at the luxury Monastero Santa Rosa Hotel in Italy, where a sea view suite will set you back nearly £3,000 a night.

The next, he’s at the wheel of a Riva yacht cruising along the Amalfi coast before posing on the bonnet of his £264,000 Rolls-Royce Dawn in Beverly Hills.

Or maybe he’d prefer his £300,000 Lamborghini Aventador roadster or the coupe version with personalised number plate. For more rugged trips, he has two Hummers and a £92,000 customised Mercedes G-class.

You’ll find him lunching at Nobu in Malibu, California, in a pair of £450 Gucci slippers, with a gold Rolex on his arm. He hangs out with rapper P Diddy at the Grammys and Kylie Jenner at the Coachella music festival in California. All events are, naturally, recorded on his smartphone, which has a £790 Louis Vuitton cover.

His five-year plan, he says, is ‘to make as much money as possible’ and escape his father’s shadow, admitting that half the reason Mahmud helped him start PrettyLittleThing was to ‘get me on the right track’.

It employs more than 2,900 staff, made £400 million in sales in 2019 and counts singers Miley Cyrus, Rita Ora and Nicki Minaj among its fans.

‘If you’re going to be in competition, I would rather keep it in the family,’ says Umar.