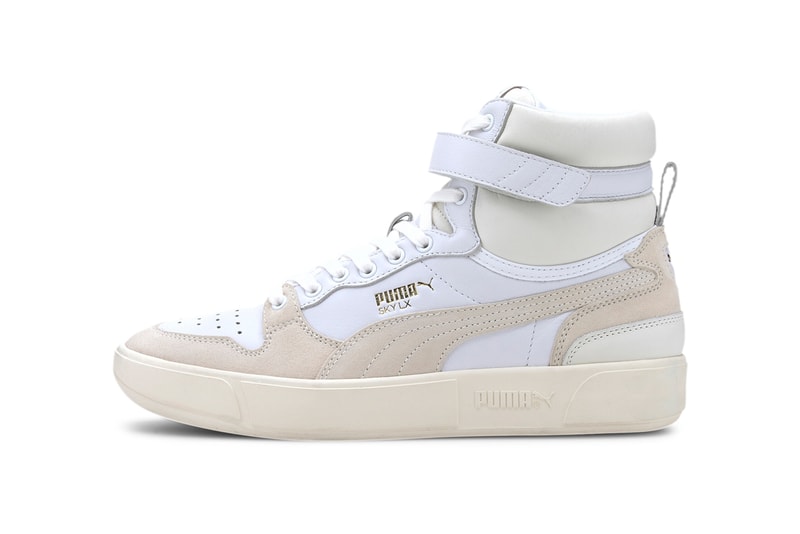 PUMA‘s Sky LX Mid was a popular basketball shoe in the ’80s, worn by the likes of Terry Cummings and Alex English, but now it’s set to serve a second life as a luxurious casual sneaker. Lauded upon its initial release for its premium materials and ankle support, the Sky LX Mid’s performance tech may be a thing of the past, but its classic look still stands out today — especially in simple colorways like this “Puma White/Whisper White.”

With a collar that reaches well above the ankle and a thick polyurethane midsole, the Sky LX Mid cuts a bold look, and it’s one that’s played up further by a healthy dose of layered suede detailing atop its crisp white leather base. Eggshell hues on the strap-equipped collar and aforementioned midsole add another color into the mix, and if the heel’s shape looks eerily familiar, that’s probably because it is — it’s somewhat similar in nature to the modern-day Clyde Court Disrupt. Gold-stamped logos on the lateral midfoot and heel round off the stylings.

Alongside other silhouettes like the Ralph Sampson Demi OG, the Sky LX Mid is helping bring PUMA’s ’80s hoops footwear back into the limelight, and it’ll release on the PUMA webstore come January 18 for $120 USD.

Elsewhere in the world of throwback basketball footwear, the adidas Streetball was recently given a “Core Black/Blue/Carbon” update.