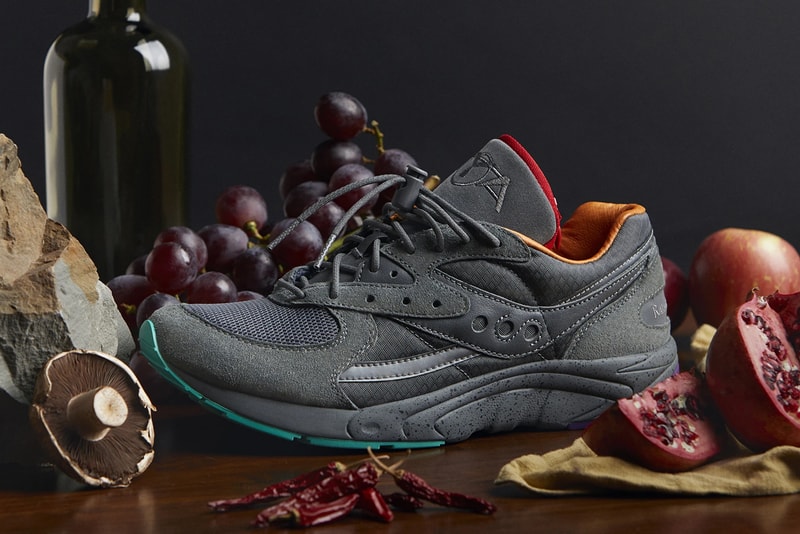 Raised By Wolves and Saucony have teamed up for a fresh “Urban Jungle” take on the AYA, a retro running shoe originally known for its customizable fit and multiple lacing options. With a bold color palette and details inspired by ’90s skateboarding footwear, the “Concrete Jungle” bridges the gap between two deeply divergent activities while presenting several clever details.

Outfitted in a steel grey, the upper makes use of two different meshes on its base layer while using suede and leather alike on the overlays. This inherently industrial base is quickly accented by vivid pops of red and orange on the tongue and leather sockliner. The tongue’s red trim encircles a partially hidden stash pocket, the design’s signature detail. This brings the shoe’s skateboarding inspiration full circle, as influential street skater Chad Muska‘s signature eS footwear from the ’90s featured similarly cheeky stashable stylings.

Multiple layered eyestays and a toggle on the rope lacing system allow for the aforementioned customizable fit. Branding is provided by a hi-vis reflective Raised By Wolves hit on the heels, an AYA — which translates to “fly swiftly” — graphic embroidered on the tongue and a standard Saucony midfoot stripe. A paint-speckled midsole and outsole with pops of soft green and rich purple finalize the look.