Sofia Richie was seen getting very close to her new boyfriend, entrepreneur Matthew Morton, while out for dinner on Monday.

In photos obtain exclusively by DailyMail.com, the 22-year-old model was spotted passionately kissing the 27-year-old Cha Cha Matcha founder and CEO on the patio of the Japanese restaurant Matsuhisa in Beverly Hills.

The daughter of Lionel Richie has been dating the son of Planet Hollywood restaurateur Peter Morton for the past month after splitting from 37-year-old Keeping Up With The Kardashians star Scott Disick in August.

Sealed with a kiss: Sofia Richie was seen getting very close to her new boyfriend, entrepreneur Matthew Morton, while out for dinner at Matsuhisa in Beverly Hills on Monday 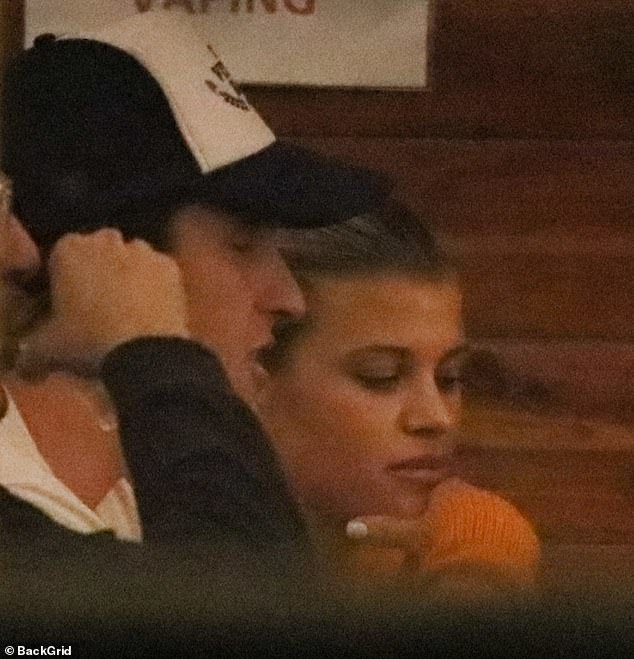 This is the first time the two have been seen kissing. The lip lock took place when they were sitting at a table against a wood paneled wall.

Richie had her blonde hair pulled back with a large clip and s also wore flattering pastel and frosty makeup on for her night out with her new love and several friends.

The Flip It Like Disick star also stood out because of her bright orange sweater which seemed perfect for the fall season. 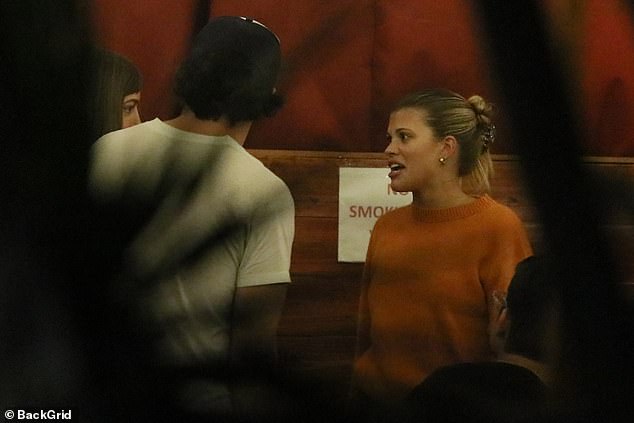 Is love on the menu? The CEO and the cover girl did not leave each other’s side 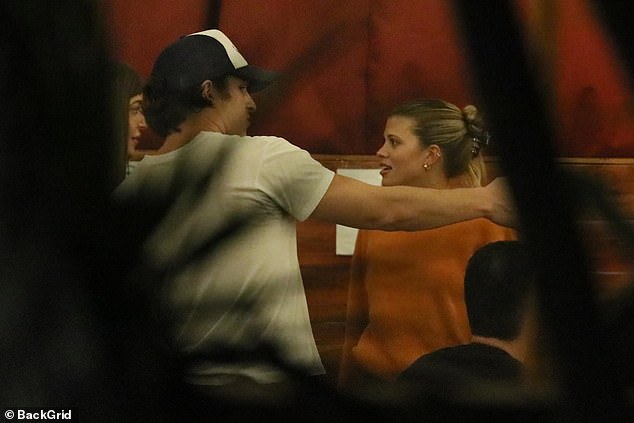 With a group of pals: The lovebirds were not alone as they were joined by several friends

She added dark slacks and a black crossbody purse. When leaving the restaurant, the star had on a face mask.

Her new beau wore a black and off white country style baseball jacket with a white shirt and dark slacks as he seemed glued to the Instagram star’s side.

The New York University graduate also had on a cap that said The Vitamin Barn on front and a black face mask that had CROIT printed in white. 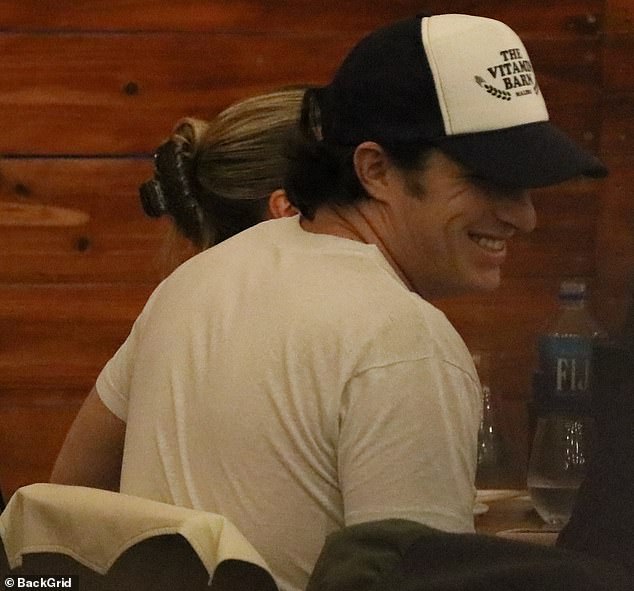 All smiles from this lucky guy: Morton had on The Vitamin Barn cap in black and white as he beamed while at the table on the patio of the restaurant owned by chef Nobu Matsuhisa 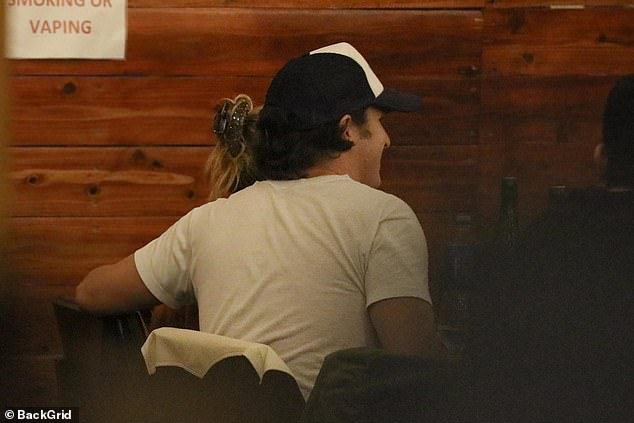 He just can’t keep his hands off the beauty: In this image, the star put his arm around the pal of Kylie Jenner

At one point Sofia was seen talking to a blonde woman, whom she hugged even though the pandemic is still raging.

And while Matthew left ahead of his love, the two were seen inside his black Range Rover while driving away as they continued to wear their face masks.

Last week it was claimed that Richie’s family ‘approve’ of her dating Morton. 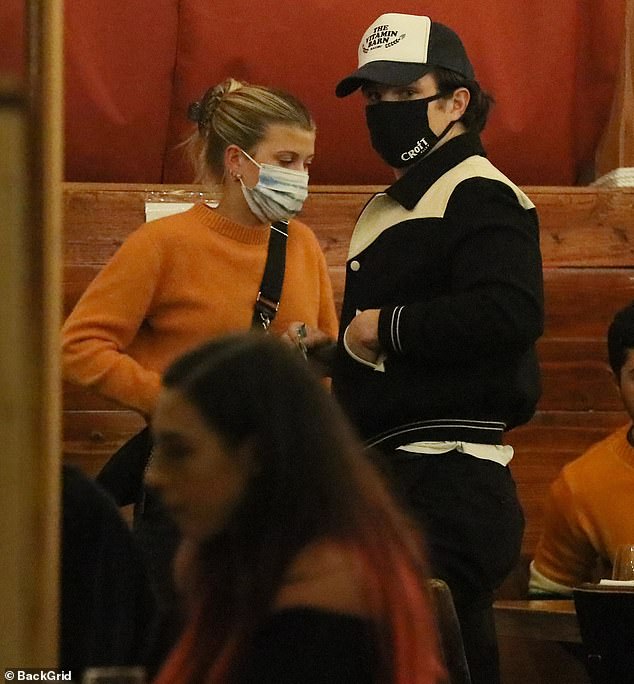 Dressed for autumn: The Flip It Like Disick star also stood out because of her bright orange sweater which is perfect for the fall season 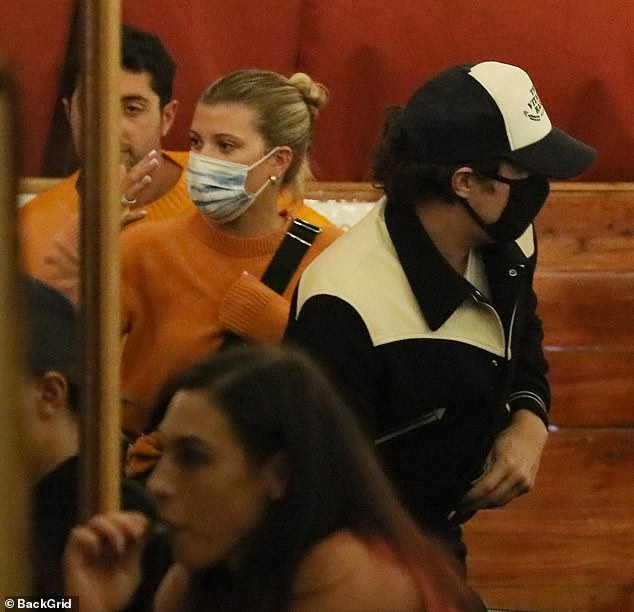 Done up just right: Richie had her blonde hair pulled back with a large clip. She also wore flattering pastel and frosty makeup on for her night out with her new love and friends 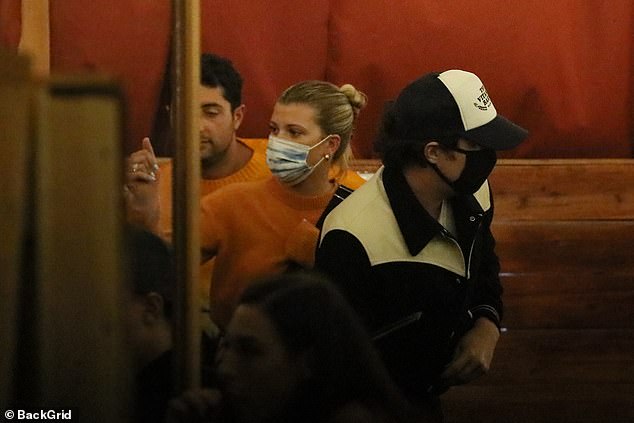 Matchy matchy with a pal: Richie’s male friend seen behind her had on the same cozy orange sweater

The SKIMS model has been romantically linked to Matthew after they were spotted dining together in Malibu in October.

Her family is said to have given a green light to their burgeoning romance.

A source told Us Weekly: ‘Matt and Sofia are totally a thing, and he’s really excited about it.

‘They both run in the same circle and have known each other. So, it’s easy and fun for both of them. Sofia’s family approves of him, which is super nice for her.’ 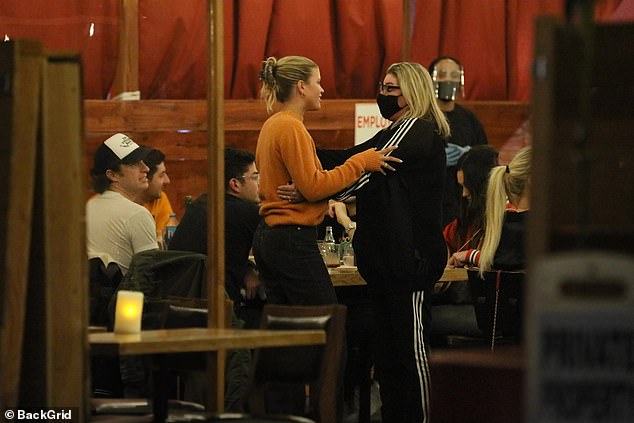 It was a big group of friends: The party took a large table that included at least four pals as Sofia was seen here saying hello to a blonde woman 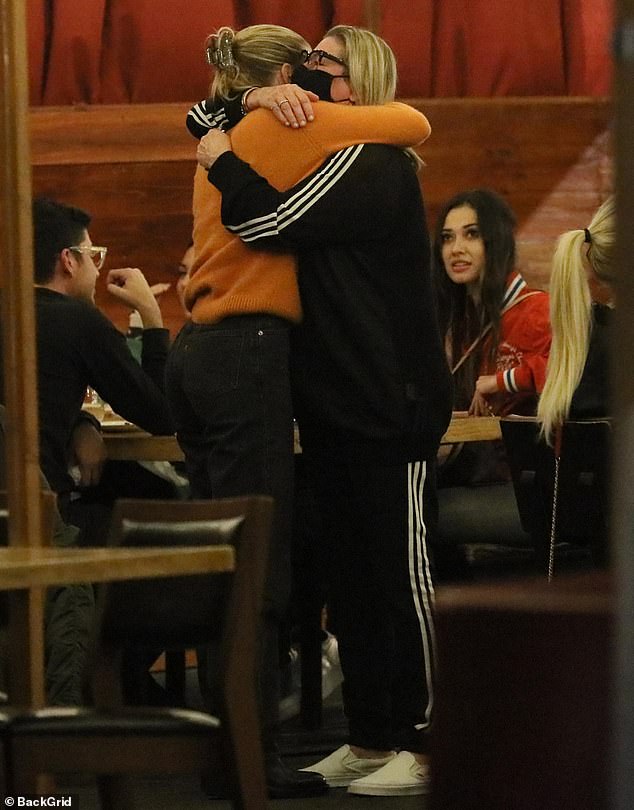 Not worried about COVID-19! The two seemed to not worry about the pandemic as they shared a warm embrace

However, an insider recently insisted that Sofia isn’t ‘looking for anything serious with anyone’ at the moment.

The source explained: ‘She’s not going to rush into anything, but Matthew’s a cool guy and they hit it off.’ 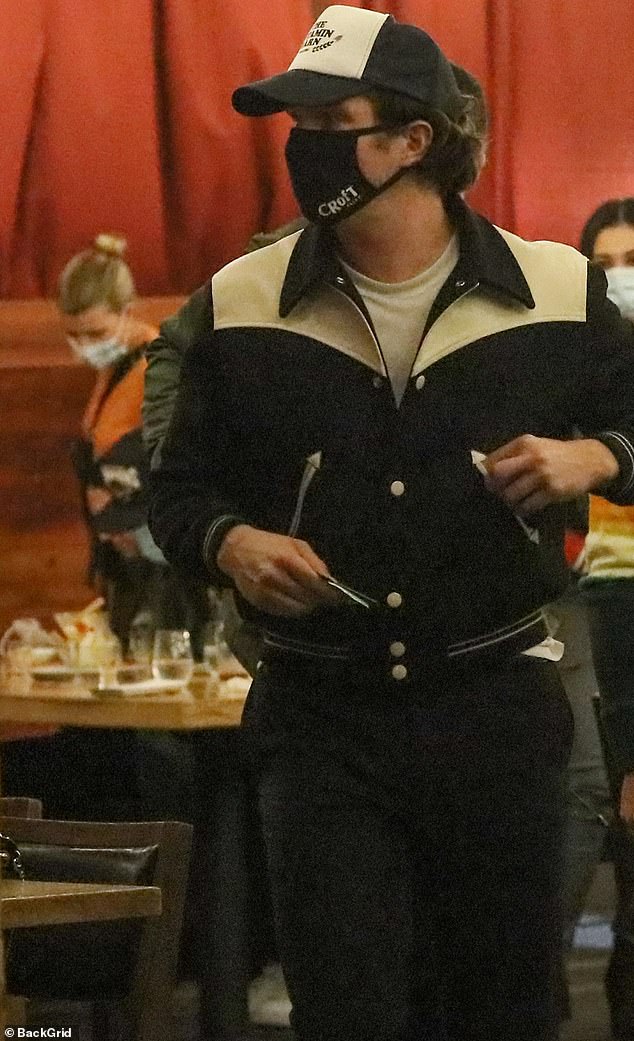 He dressed up for his lady: Morton wore a Western style baseball jacket as his new love was seen behind him on the left 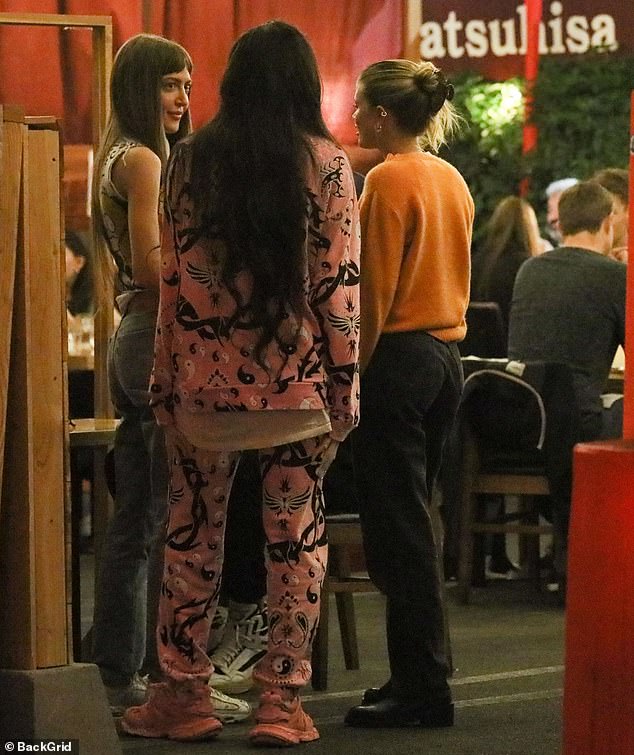 There they are: The pals chatted up the sister of Nicole Richie as they stood by the Matsuhisa sign in the parking lot patio

It was also suggested that Sofia is determined to enjoy the single life for the time being and isn’t looking for a relationship.

Speaking about her links to Matthew, the source shared: ‘They have been texting for a few weeks and decided to go out. She’s having fun and isn’t looking for a relationship.

‘She enjoyed her dinner date with him but it’s super casual.’ 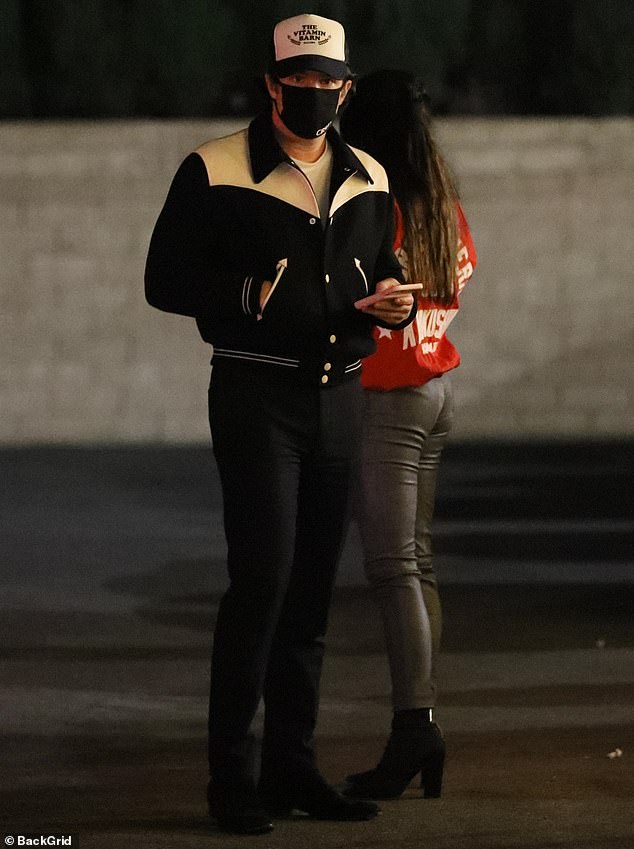 In the parking lot: The CEO looked at his pink cased cell phone as he waited for his car 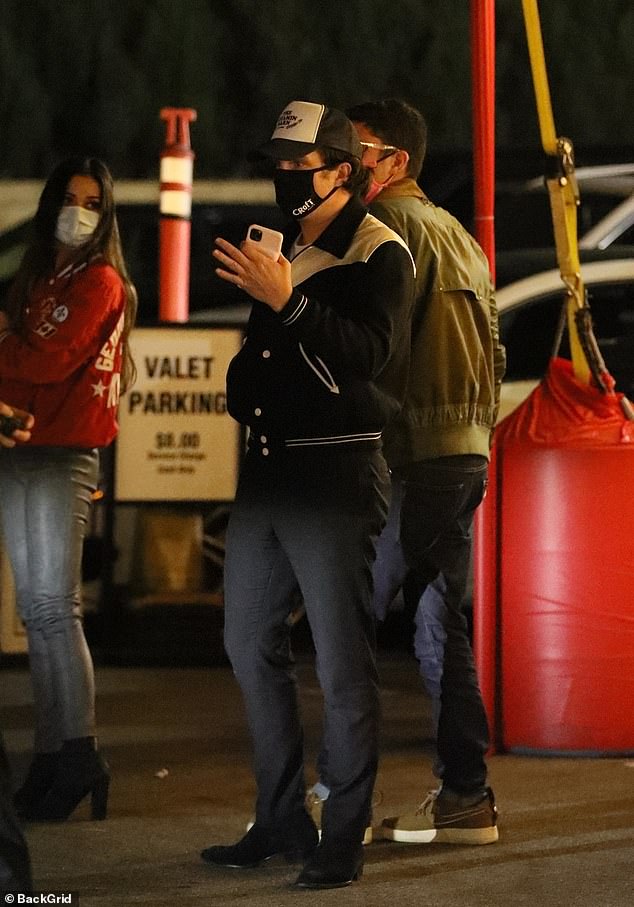 He has $8 to spend: The star was seen in front of the Valet Parking sign as he talked to a pal 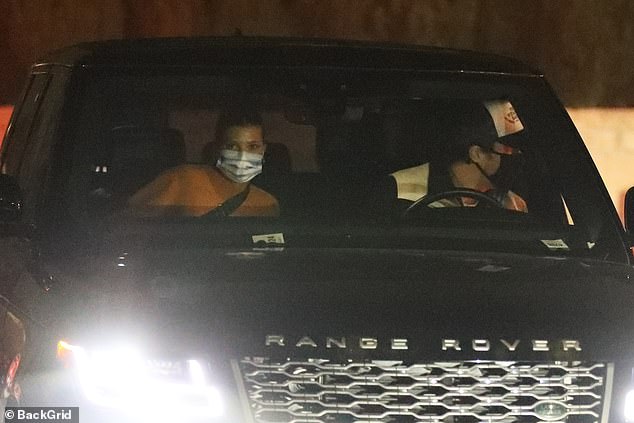 There they go away: The two were seen inside his black Range Rover as they continued to wear their masks

Matthew has not had an easy time in the past 15 years as he has lost several family members.

His mother is the late Tarlton Pauley who died in 2017 at age 55 in Beverly Hills.

His half brother is the late Harry Morton who died in 2019; he was the owner of the Pink Taco chain of restaurants.

And his former stepsister is Domino Harvey, the subject of the October 2005 film Domino starring Keira Knightley and directed by Tony Scott; she died in 2005. 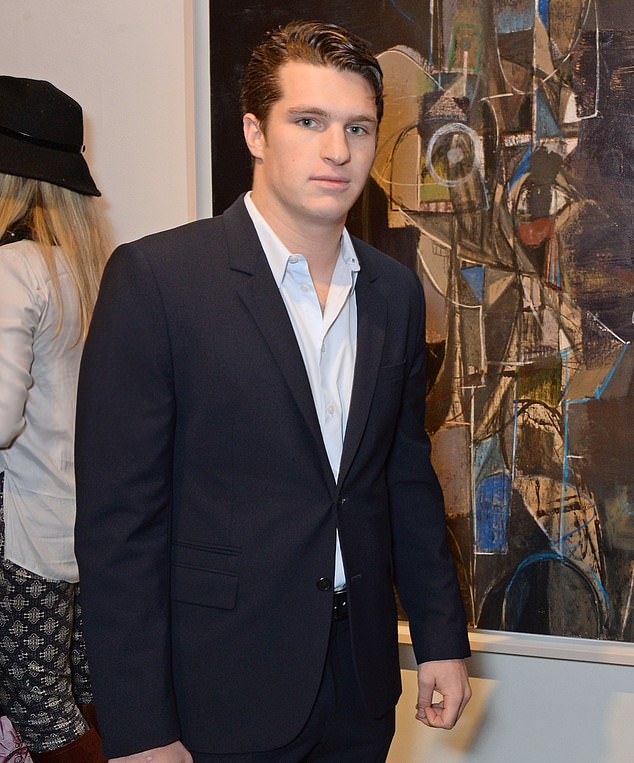 More dressed up: Morton at the opening reception at Simon Lee Gallery for an exhibition of new paintings by American artist George Condo in London in 2014 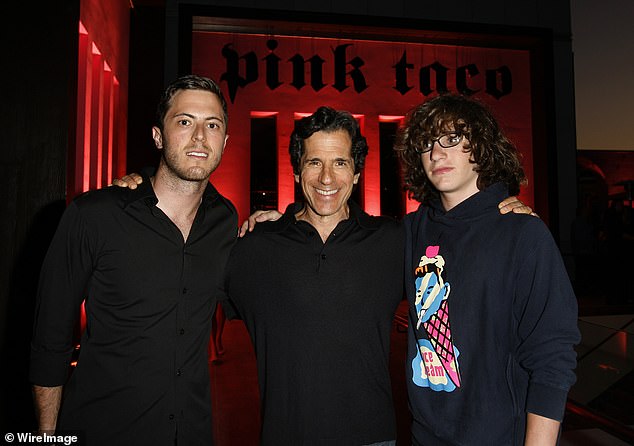 Sofia and Scott had been on and off for three years prior to their final split, and had even called it quits in May this year before rekindling their romance in July.

However, their romance was on the rocks again by August, and the pair have remained separated since.

A source said at the time: ‘Scott and Sofia are spending time apart. She is making it a point to do her own thing.’

She seems to have stayed friends with his ex partner Kourtney Kardashian’s sister Kylie Jenner as they have been seen hanging out since August. 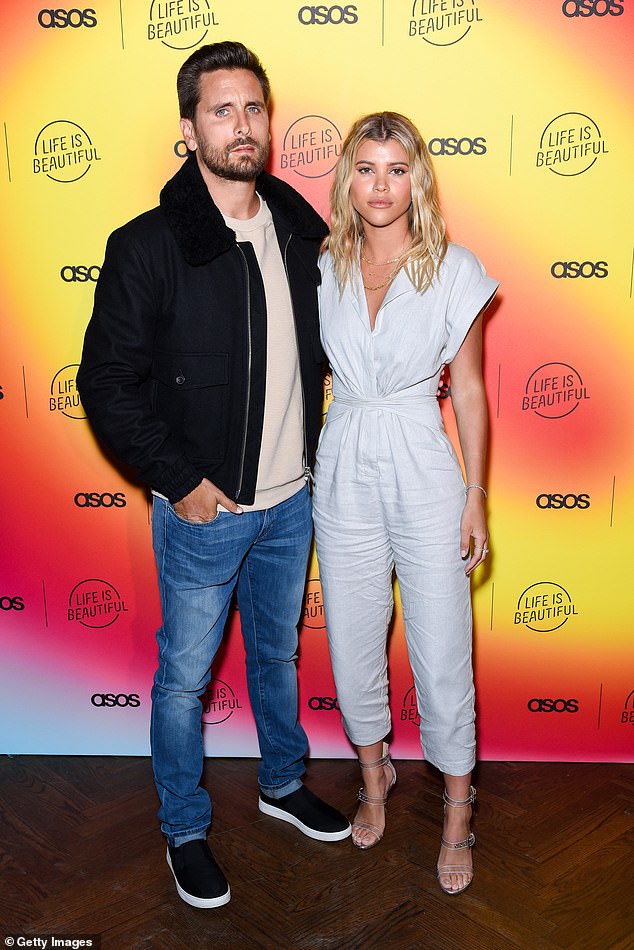 Her ex: Sofia and Scott had been on and off for three years prior to their final split, and had even called it quits in May this year before rekindling their romance in July. They split for good in August. Seen in April 2019

Unlike Scott, Matthew seems to take his career as a Matcha CEO seriously.

On his website he gushes over his love for business: ‘My family has been in food and beverage now for 4 generations. That’s definitely been an inspiration for me.

‘Walking with my dad in his restaurants and hotels was always something I enjoyed.

‘Being young and seeing all of these big operations as I grew up was really special. It’s always been a dream of mine to have a hotel or restaurant,’ he stated.

‘Food and beverage was one of the many things I was interested in growing up. I’ve also always been passionate about art, film, music and literature.’