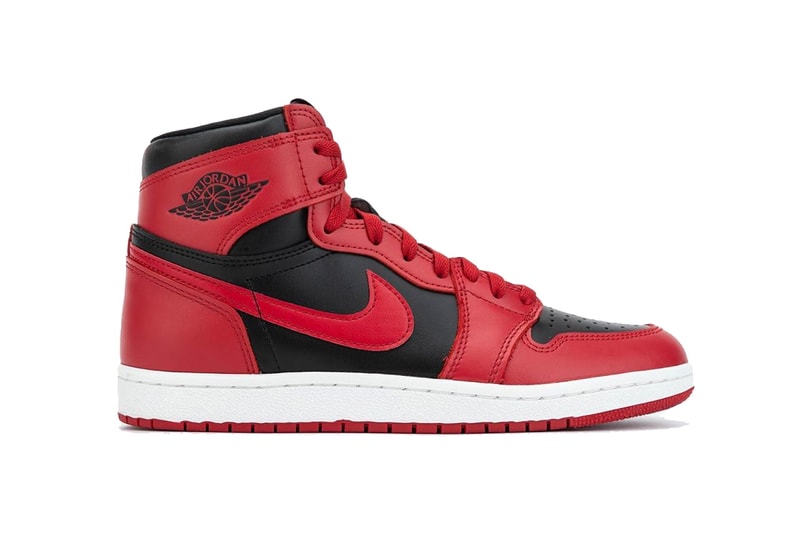 Jordan Brand‘s wildly popular Air Jordan 1 is set to enter its next phrase with the Air Jordan 1 Hi ’85, a true-to-the-original re-creation that will debut in a “Varsity Red” colorway. Essentially a flip of the OG “Banned/Bred” AJ1, the ultra high-cut “Varsity Red” salutes Michael Jordan‘s first-ever signature silhouette with its heritage construction.

Combining black leather quarters and toeboxes with bright red overlays, the “Varsity Red” inverts “Banned/Bred” stylings on its forefoot and midfoot, but leaves the heel, collar and signature red Swoosh unchanged. The sky-high collar provides authentic detailing, as does the hangtag — which features a memorable press photo of MJ soaring for a dunk that would later serve as inspiration for the Jumpman logo. A sail midsole and red outsole round off the look, and the “Varsity Red” also comes packaged in individually numbered dustbags, nodding to its limited production run of 23,000.

Long rumored, the Hi ’85 was first revealed by Hiroshi Fujiwara in “White/Varsity Red,” serving as part of a “New Beginnings” pack that also contained the first-ever Air Ship retro. However, this second colorway only serves to build anticipation further before the Hi ’85’s supposed release around NBA All-Star Weekend in Chicago this February.

Early reports have the price pegged at $200 USD — an undeniably handsome sum, as past Air Jordan 1s have retailed for $160 USD — but nothing has been confirmed by Jordan Brand yet. Have a gander at a full set of images here, and stay tuned for more information as it’s available.

In the meantime, be sure to check out the re-created Air Max 90, an influential silhouette that’s celebrating its 30th anniversary in 2020.