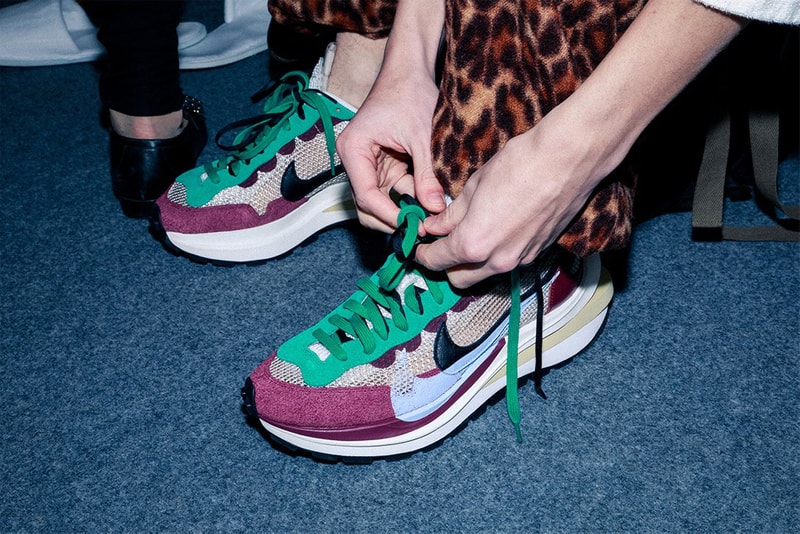 Each fashion week season sees the emergence of a strong crop of covetable kicks. Last season included a variety of wave-making shoes from all the usual names, plus a couple of surprises. This trend carried over to the Fall/Winter 2020 lineup, which marked the return of partnerships from the likes of sacai, Kiko Kostadinov and the reigning king of collaborations, Virgil Abloh. There was also a host of more unexpected joint efforts, which (unsurprisingly) ranged from the unforgettable to the unremarkable, plus a host of in-house kicks that similarly varied in success.

When it came to picking the most notable shoes of a sea of contenders, we weren’t necessarily considering their recognizability, wearability or even quality — instead the deciding factor came down to the impact inherent in each footwear offering, the ones that made a splash or represented a notable moment for the designer. Honorable mentions include OAMC, Craig Green’s adidas collaborations, Pigalle’s multiple partnerships, GMBH’s quirky ASICS and Maison Mihara Yasuhiro’s in-house sneakers, his signature warped canvas sneaker executed in an over-dyed finish.

Read on for our picks for the most impactful footwear to come out of this past Paris Fashion Week. If you disagree — take it to the comments. An unexpected but welcome addition to the PFW runway slate, Valentino’s collaborative take on Onitsuka Tiger’s classic Mexico 66 may well have been the most surprising co-branded footwear silhouette of the week. Aside from doubled-up embellishments on the tongue, midfoot and insoles, the Italian fashion house also added pops of premium leather and hand-printed branding, boosting the shoe’s high-end flair without compromising its original sporty ethos. This “less is more” approach is not often taken in the world of collaborative footwear, but it’s perfectly in line with Valentino’s elevated style. @hypebeastkicks: @rafsimons offers a full look at its new (RUNNER) range. Indebted to distinct sportswear elements, the initial lineup is comprised of eight new styles and iterations done in a number of different colorways. They're expected to hit select retailers in June 2020.⁠⠀ Photo: Raf Simons

Although most footwear fanatics likely know Raf Simons from his myriad of collaborations — most notably his early dabbling with ASICS, revival of the Ozweego and elevation of the Stan Smith — the legendary Belgian designer’s main footwear foray this PFW was a series of in-line silhouettes simply dubbed (RUNNER). The designs are futuristic in both make and moniker, combining details like laceless uppers, rear zippers and striking midsoles with names like “SOLARIS,” “ANTEI,” “CYLON,” “ORION,” and “2001.” Complete with bold colors, Simons’ latest footwear offering makes the perfect finishing touch to the trim slacks and baggy track pants in his FW20 collection.

A selection of footwear styles from Autumn/Winter 2020 by Samuel Ross. Made in Italy & Portugal.

Samuel Ross’ A-COLD-WALL* presented looks that are equal parts conceptual and utilitarian, evoking the feel of minimalist architecture. Though Ross has garnered attention for his collaborative efforts with Nike in years past, FW20 was focused firmly on his own original in-house footwear silhouettes, a continuation of the original designs introduced during his Spring/Summer 2020 show and a step beyond the Shard sneaker. Slip-on shoes and Chelsea boots both featured thick, jagged foam midsoles, while a supple leather high-top gave off basketball flair with its sleek midsole and collar strap. Perhaps the most notable pair was a slip-on moccasin with a neoprene liner, in-line with A-COLD-WALL*’s industrial inclinations. Few designers understand the power of collaboration quite like Virgil Abloh. The Off-White™ creative director has a laundry list of hype-inducing joint efforts, and he presented what was unquestionably the most potent pair of sneakers from PFW with his Off-White™ x Air Jordan 5. A shoe that’s already been feverishly anticipated by the general sneaker-loving public for months, Abloh’s stripped-back take on Michael Jordan’s fifth signature silhouette swapped its normal nubuck for faded synthetics; slapped his signature Helvetica text on the medial midfoot; and even added thin TPE circles that can be cut out to add a textured effect in line with the punched-out holes seen in the menswear offering. This detail also continues the “Ghosting” ethos Abloh debuted on 2017’s “The Ten” collection with Nike and Jordan Brand. Although these AJ5s were unveiled at Fashion Week, the shoes will be released during NBA All-Star Weekend in Abloh’s hometown of Chicago, representing the mix of sport, street and opulence that is Abloh’s signature. 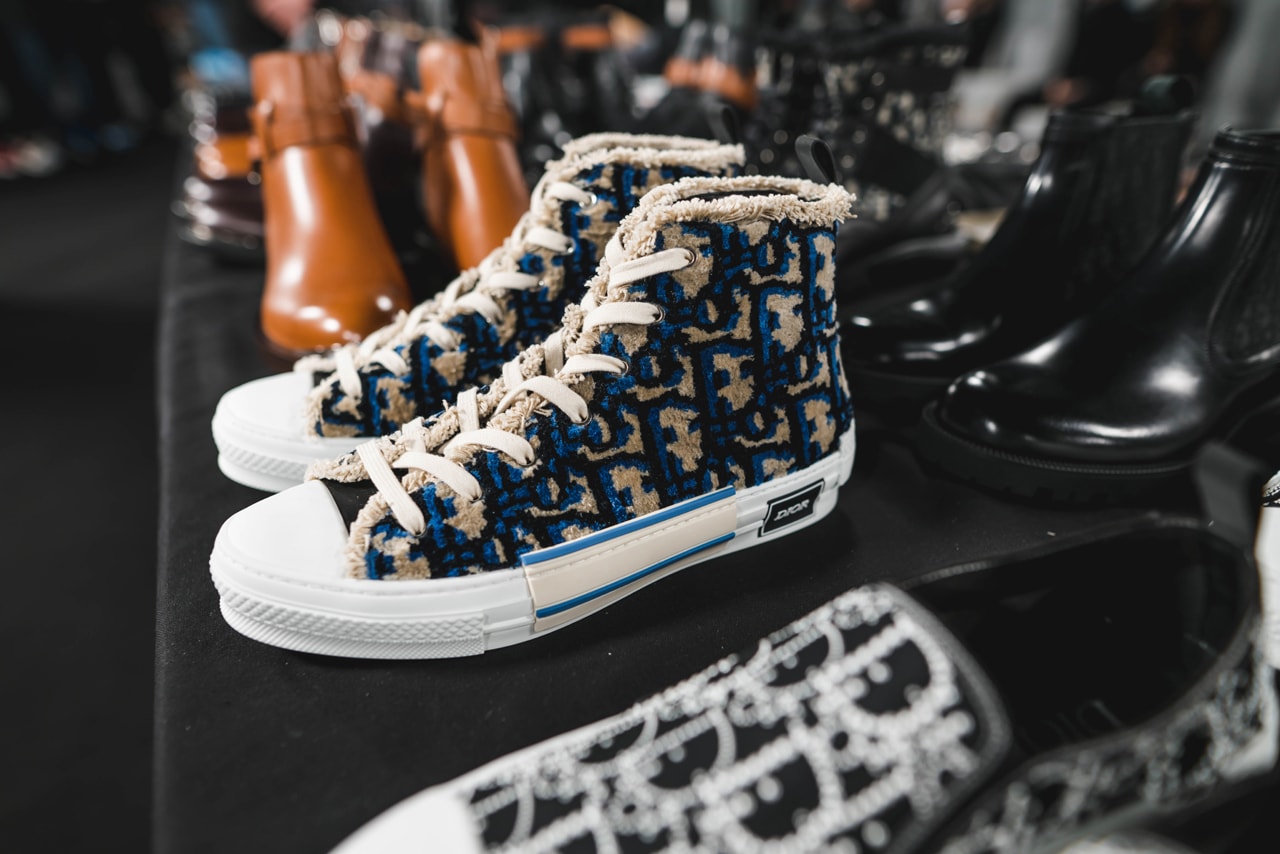 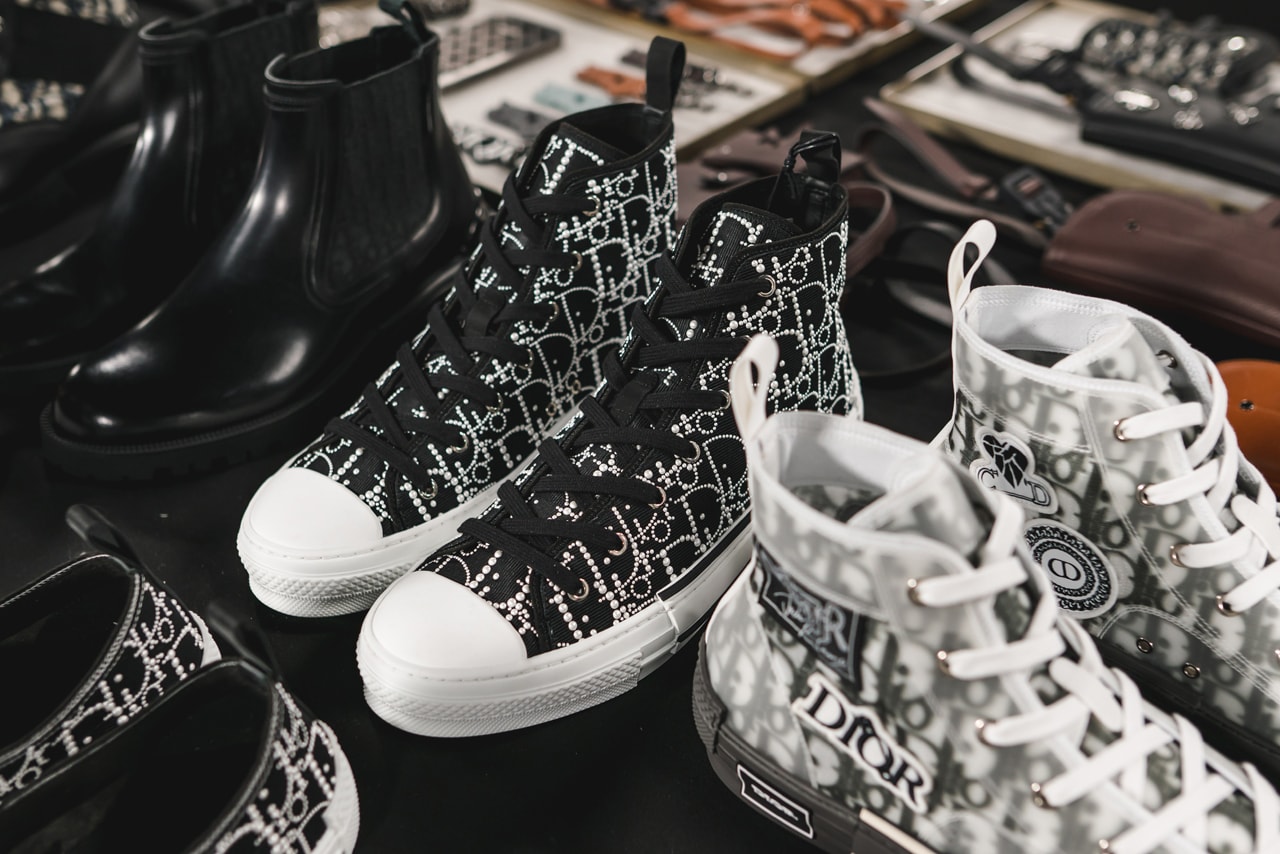 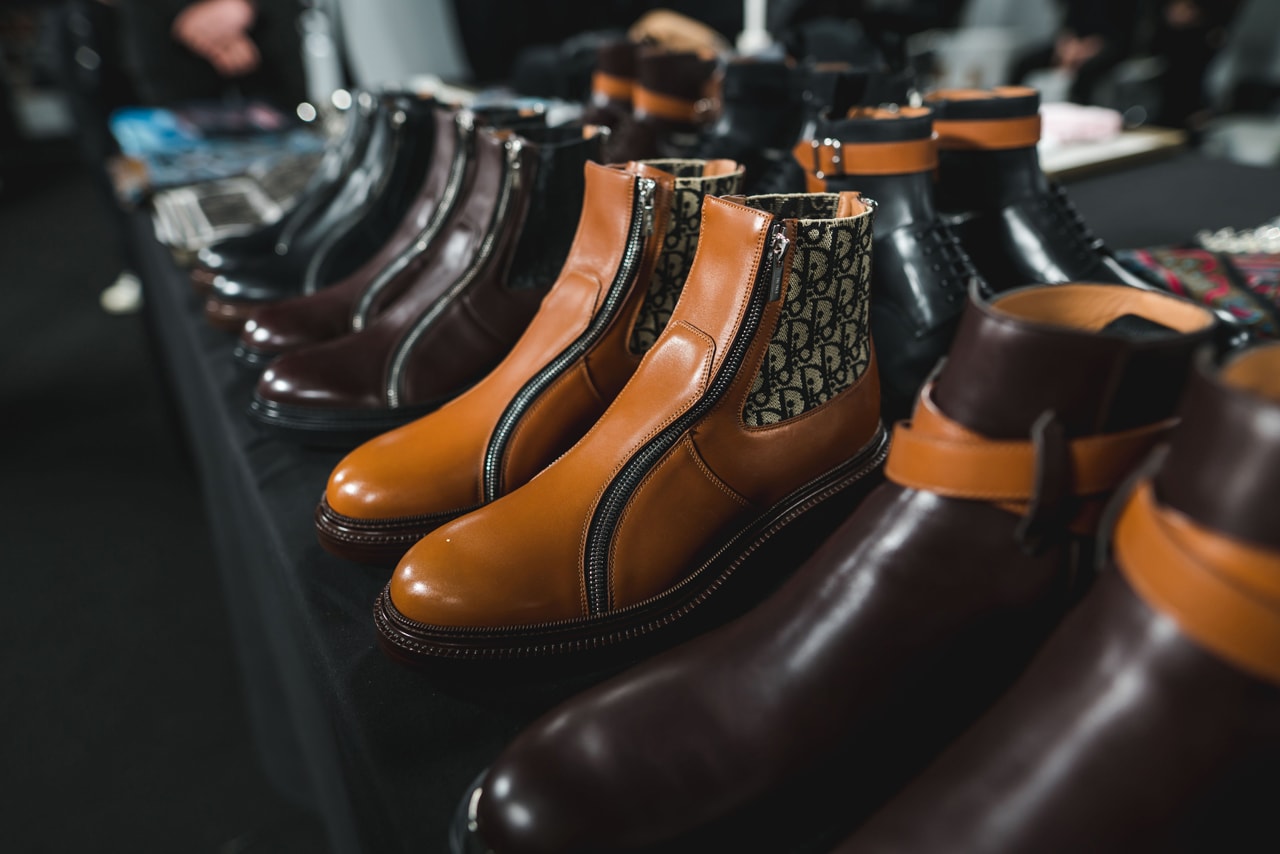 2020 is set to be a big year for Dior and creative director Kim Jones. Although Dior already has the prohibitive favorite for “shoe of the year” under its belt thanks to the sumptuous Air Jordan 1 collaboration that premiered at Miami Art Basel, Jones and men’s head footwear designer Thibo are certainly not resting on their well-tailored laurels. Inspired in part by the late, great Judy Blame, Jones’ Dior offerings for PFW included another B25 running sneaker and a low-cut slip-on silhouette with a sparkling monogram print. Of course, there were multiple takes on the popular B23 as well — including a luxurious fringed terry take with a contrasting monogrammed print, a translucent style punctuated with powerful patches and a corduroy-constructed black pair with the same bejeweled details as the aforementioned slip-ons. It’s more than just sneakers here though: Dior also crafted buttery leather Chelsea boots with hard bottoms and plentiful zippers inspired by Blame’s punk artwork. 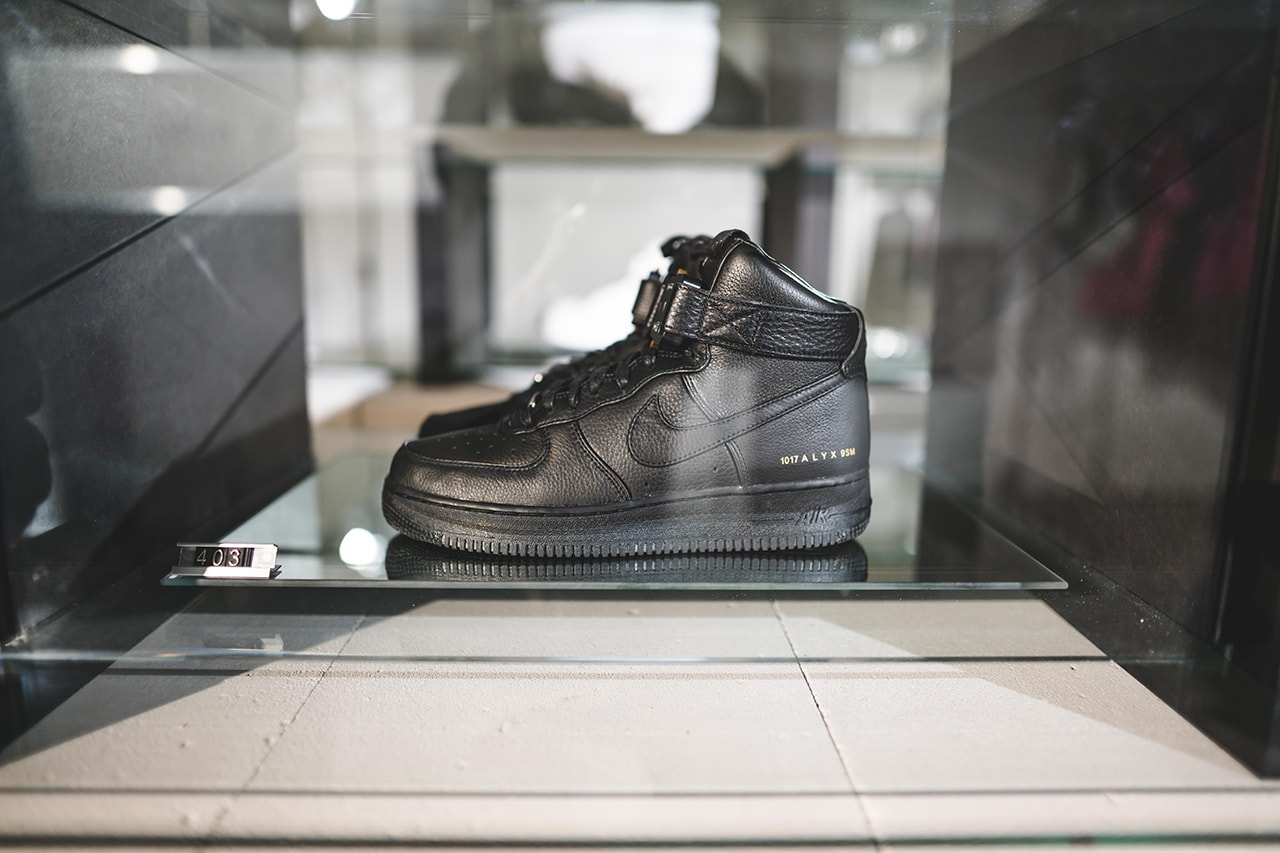 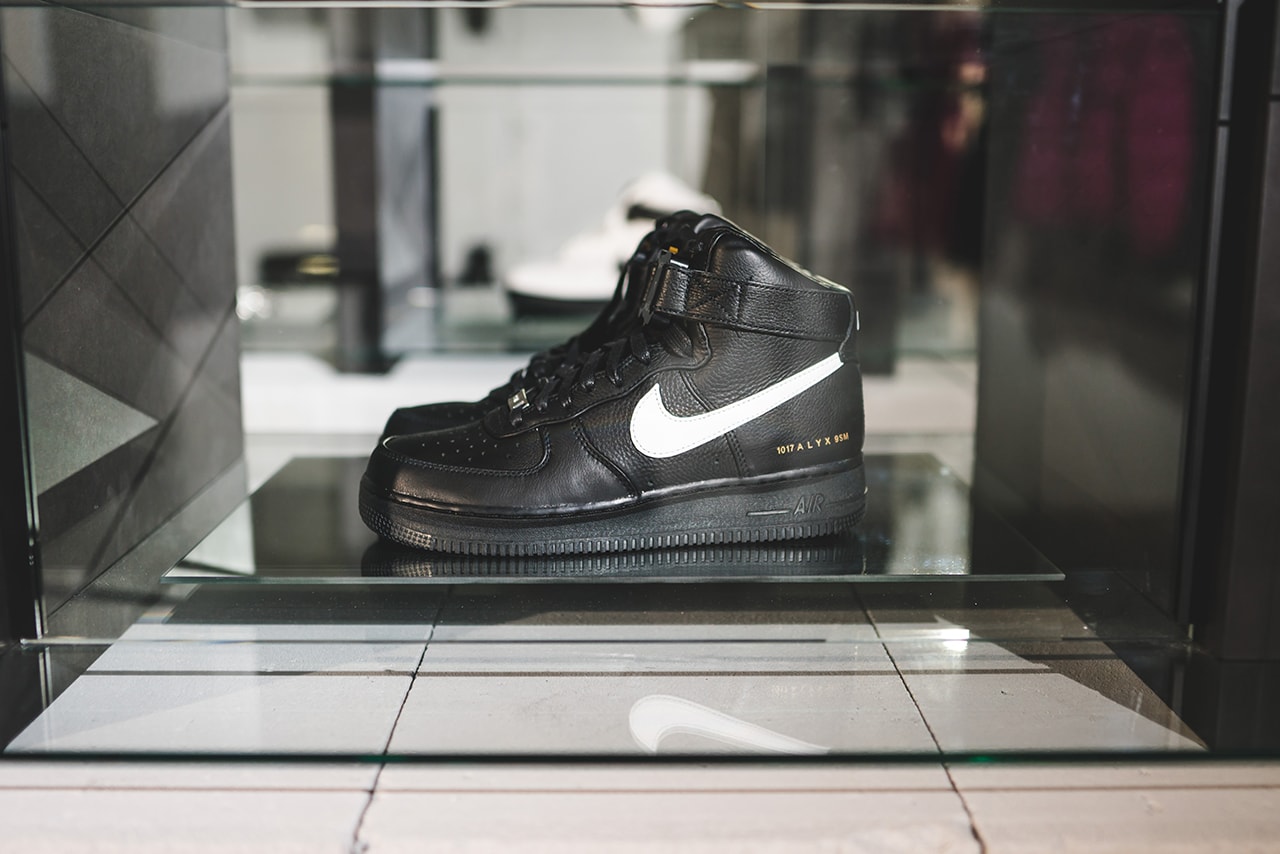 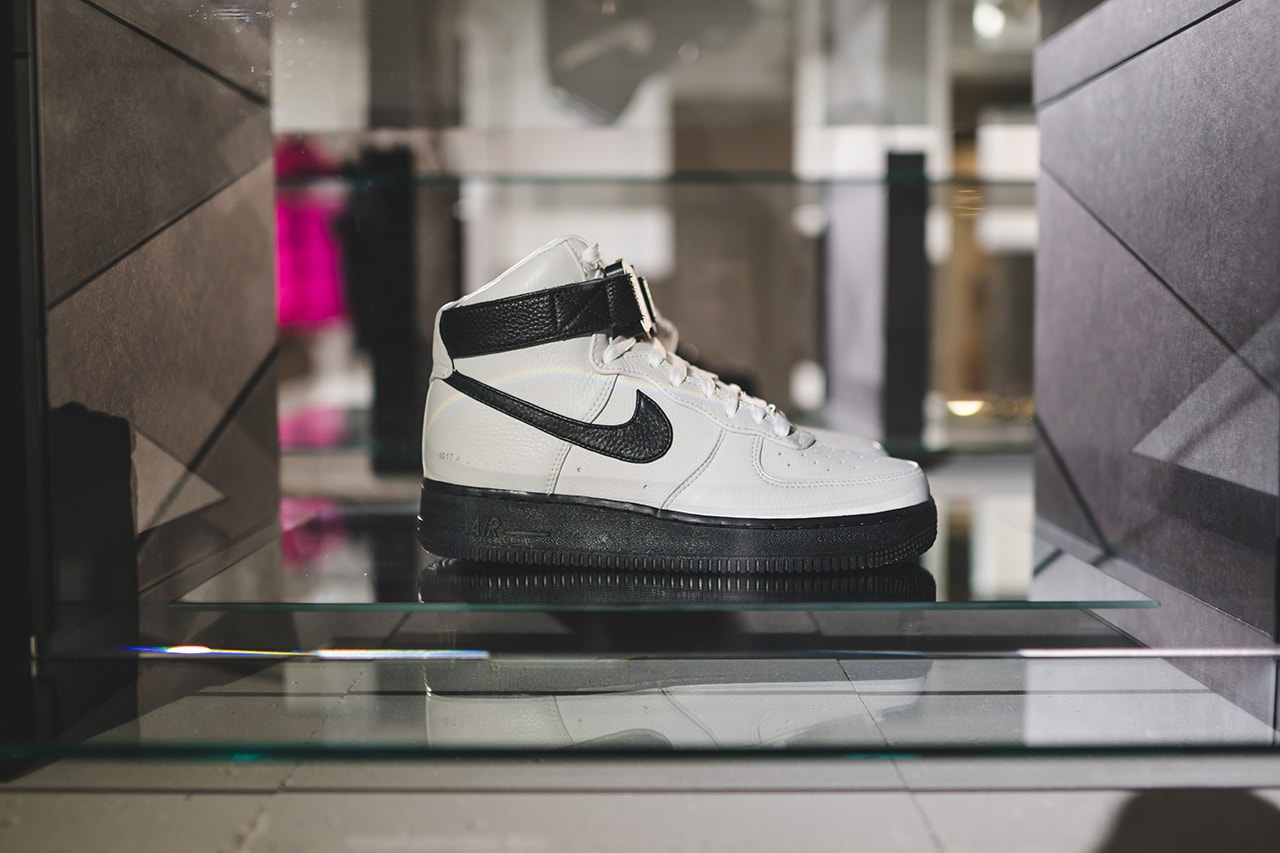 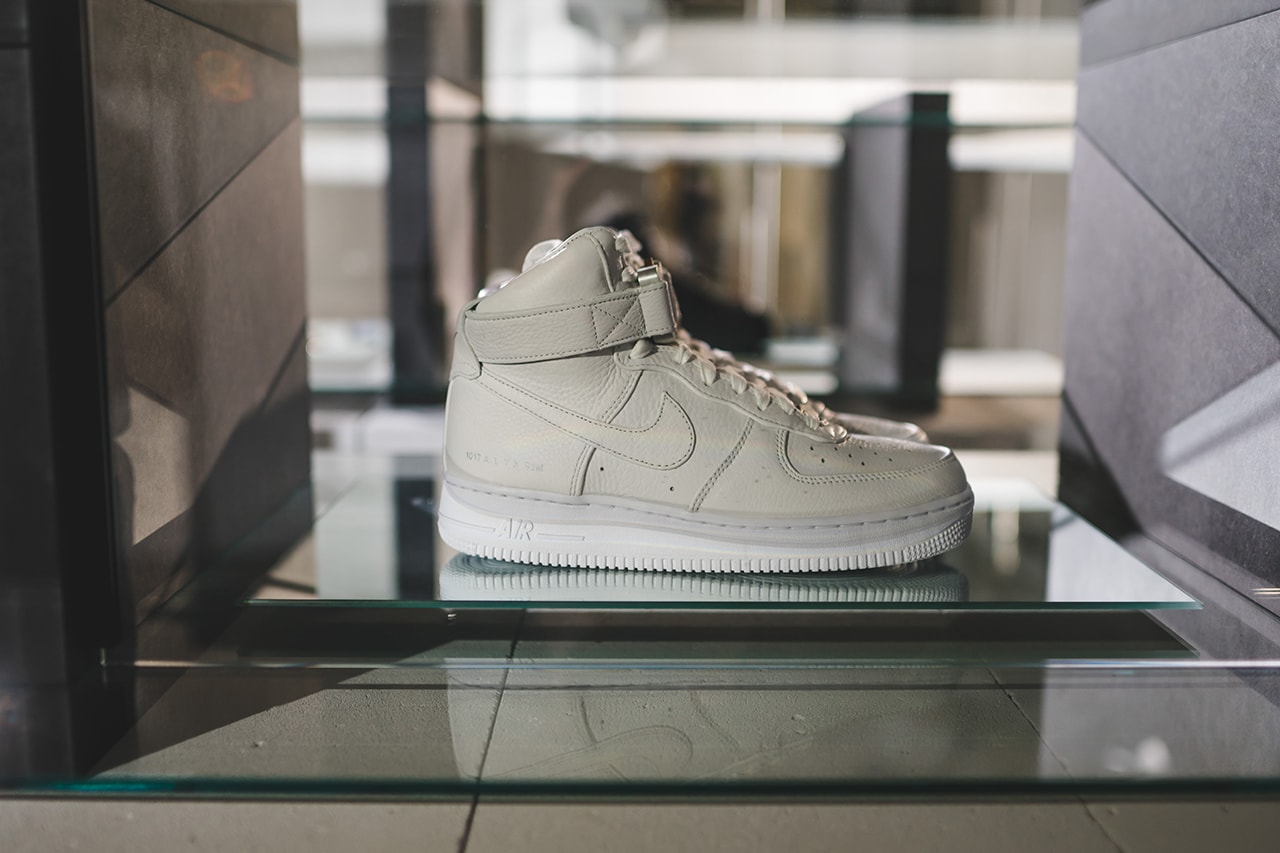 Matthew M. Williams’ 1017 ALYX 9SM continued to lead the neverending charge towards the avant-garde with its long-teased, highly-limited Nike Air Force 1 collaborations that debuted at a pop-up shop held during Paris Fashion Week. First seen at 2018’s HYPEFEST, Williams’ quartet of high-cut Forces use premium tumbled leather and classic black and white colorblocking to great effect. But they also bring the timeless look into a new realm with a signature ALYX rollercoaster buckle securing the recognizable proprioceptus belt. These styles are one of the few on this list to have already been released thanks to the pop-up and a pre-order for two colors on the ALYX webstore, but a wider release may also be forthcoming. Bulgarian-born, British-based Kiko Kostadinov is likely best-known to sneaker lovers for his extensive slate of ASICS collaborations. Indeed, several fresh ASICS models were introduced during his FW20 runway, but Kostadinov also presented a brand new in-house line, also moving away from his long-standing Camper partnership. Kostadinov’s garments abandoned the pattern-heavy styles of his prior collection, so his high-tech ASICS runners were crafted to match; he executed the laceless sneakers in tonal makeups with highly technical accents and GEL cushioning. While the ASICS were sleek, Kostadinov’s own footwear was significantly more chunky, blocky and brutalist. Bold seams, thick soles, broguing and rich leathers were the name of the game, with one striking pair equipping a snakeskin-style brown and black print. @hypebeastkicks: @futuradosmil’s @futuralaboratories label has unveiled a collaborative collection alongside @goretexstudio, and it includes a Vibram-soled sneaker. The friends-and-family-only model has been equipped with a strappy closure, Futura’s signature “Pointman” detailing and a retro, chunky shape. Swipe for a closer look at it, then head to the link in our bio for more info on the collab.⁠⠀ Photo: Pete Casta/@hypebeastfr

Showcasing the recent democratization of the formerly-guarded event that is Paris Fashion Week, influential artist Futura teamed up with GORE-TEX and Vibram for a sneaker collaboration as part of a “Selected Memories of Functionality” pop-up. Although the event itself was a showcase instead of a traditional catwalk show, the renewed mainstream interest around Futura’s work gave it the impact of a full runway presentation. The New York native’s graphics appeared on boiler suits and see-through ponchos alike, but the “guest of honor” was his first original footwear silhouette under the revamped Futura Laboratories umbrella. Proffering a chunky, durable upper lined with GORE-TEX, the shoes also boast a strap closure and a distilled version of the artist’s signature Pointman graphic before being rounded off by a durable Vibram sole. Although the kicks are a friends-and-family only release, the accompanying GORE-TEX wearables may see the light of day later this year. @hypebeastkicks: @sacaiofficial’s runway show at #ParisFashionWeek offered a first look at the anticipated @nike collab, confirming the make and three variations of colorways. The duo’s innovative Nike LDWaffle became one of the best sneakers of 2019 and it appears they are looking to continue the doubled-up motif for 2020, complete with co-branded tags, a deconstructed outsole and varying Swoosh designs. Hit the link in bio for more details on the collab.⁠⠀ Photo: @karlhab

After crafting what was arguably the shoe of 2019 with her Nike LDWaffle, sacai’s Chitose Abe doubled-down on doubled-up detailing during her brand’s FW20 show, presenting a powerful new Nike silhouette dubbed the Pegasus Vaporfly. Where the LDWaffle was all retro, the Pegasus Vaporfly is almost entirely futuristic, melding the signature aesthetics of two high-performance pieces of Nike Running footwear together to create a highly conceptual lifestyle design. Multiplied Swooshes, laces, eyestays and midsoles all return, only amplified more than ever by being blown up to tremendous proportions. This dual-pronged hybrid may very well be the boldest, most conceptual piece of footwear we saw all PFW — and one that’s sure to be immensely popular upon release, just like its predecessor. A post shared by White Mountaineering (@whitemountaineering_official) on Jan 18, 2020 at 2:09pm PST

Constantly taking slope-inspired style to a whole new level, White Mountaineering frequently brings its unique ethos to collaborative footwear. After amicably ending a partnership with adidas earlier this month, the Japanese brand sent a comprehensive slate of collaborations down the runway, featuring Saucony, UGG and Danner. The Saucony offerings ran the gamut from classic to futuristic thanks to a speedy runner with a technical Boa lacing system plus an earth-toned Grid Web with vivid orange and blue accents that are reminiscent of Nike ACG’s classic Mowabb. UGG’s thick-soled CA805 received a co-branded makeover as well, taking on a smooth tonal tan colorway with special branding, accompanied by tall quilted boots and convertible slippers. Finally, Danner threw in a tan suede boot, lined with GORE-TEX, featuring a technical winch lacing system and sitting atop a sizable platform sole.