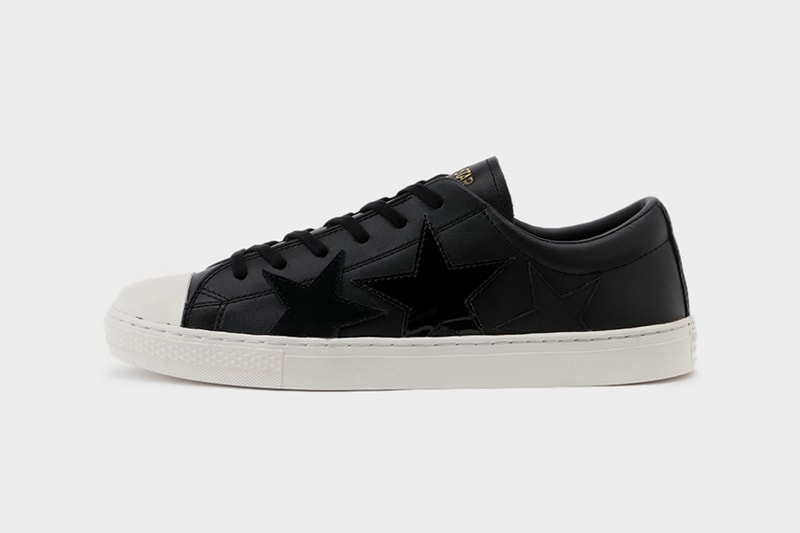 Converse Japan has re-worked its All-Star Cup into a bold new makeup dubbed the “Triostar Ox.” Using Converse‘s signature star motif for its key detail, this shoe takes the brand’s century-plus of heritage and remixes it into a silhouette that’s high fashion-adjacent, but still inherently sporty in nature. This is achieved by a low-cut construction and a bold three-star graphic, layered onto the medial midfoot.

Presented in both black and white, each colorway uses a smooth leather for the base and plays with material on the stars: the first star calls upon a soft nubuck, the middle a sharp patent leather and the last the same smooth leather as the base. Meanwhile, the medial side is left completely unadorned, providing a simple contrast to the flashy outer half.

Recognizable rubber toe caps add some Chuck 70-esque style, and gold foil Converse logos appear debossed on both the tongue and leather sockliner. The midsole features more Chuck-style detailing on the heel badge and forefoot, but differentiates itself by removing the midfoot piping. All these details and premium materials combine for a style that’s seemingly equal parts Golden Goose, Common Projects, and classic Converse.

The Converse All-Star Cup “Triostar Ox” will release via Converse Japan later in January. The MSRP is set at a tax-included price of ¥16,500 JPY (approximately $153 USD).

Elsewhere in the world of footwear, customs authorities in the US recently busted a $472 million USD counterfeit sneaker ring.